School Superintendent Zach McLaughlin issued a memo on Sept. 15 to “Springfield School District families” in which he dishonestly attacked a school board resolution prohibiting critical race theory (CRT). CRT is greatly more aggressive than Malcolm X and the Black Panthers — just investigate for yourself — but McLaughlin et al. are already teaching it.

This shallow attempt to frame the discussion exposes the lies of CRT cult members like Zach McLaughlin. He is paid some $160,000 yearly (plus benefits) to protect children, not attack those concerned for their education. What he writes in this memo is an abuse of position — those questioning CRT do not seek to “limit discussions concerning race and gender issues.”

This is not “race discussion” or a “discussion of history” — CRT is a new ideological racism, easily discerned in the materials this dogmatic superintendent then proudly directs us to:

As part of that meeting on the 23rd, the high school administration will discuss the inclusion of an article on white supremacy culture as part of some summer curriculum conversations. SHS Assistant Principal Michael Ruppel developed a memo in response to the board’s inquiry. It provides great insight into the issue. (It can be found here.)

The memo provides great insight indeed. Unashamedly proclaiming it is built on the racist rantings of agitator Elijah Hawkes, the memo links to the Southern Poverty Law Center and numerous materials that discuss brainwashing white children and equipping them for “anti-racist actions.” 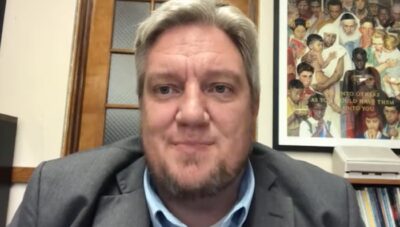 The law in Vermont is that school boards (elected by parents) have control over curricula. Superintendent McLaughlin is panicking that one school board has bravely decided to have a public discussion about this hateful ideology — which he seeks to dishonestly discredit as “limiting discussion.” In fact, he is trying to control the discussion, to eliminate opposing views to his new orthodoxy. The last thing CRT proponents want is public awareness, let alone critical discussion.

Vermont’s children are being weaponized full bore in an extremist left-wing assault on America, the Constitution, and Vermont’s culture. Elijah Hawkes plans to “provide the theoretical framework, and the practical tools, to empower”:

We are expanding the network of educators in Vermont and the wider northeast who are concerned with the dangers of white supremacist extremism and far-right radicalization in youth. Our society needs educators engaged in countering the risks of far-right radicalization. And educators and families need help in this work with young people, especially white youth, who are at risk. … Dangers range from predatory recruitment and grooming, to the quietly insidious poisoning of young minds seeking a sense of belonging, self, and certainty in a troubled time. Efforts to protect our white youth from these threats is a priority that goes hand in hand with efforts to protect BIPOC youth from the dangers of systemic racism.

But wait — parents have been repeatedly told that CRT is just a university program, not taught here. Elijah Hawkes explains the truth:

PERIL brings the resources and expertise of the university sector to bear on the pressing problem of growing youth polarization and extremist radicalization. Through partnerships, funded research and evaluations, and out-of-the-box design thinking, PERIL empirically tests scalable research, intervention, and public education ideas to reduce rising polarization and hate.

Where is the KKK that is predatorily recruiting white nationalists in Vermont? This McCarthyite histrionics is part of the CRT fallacy, embraced without question by Hawkes and others — but do Vermont parents agree that their children must be conditioned with “out-of-the-box design thinking”? Have they been consulted? As constitutional attorney Josh Hammer has warned:

Instilling racially divisive poison in the minds of impressionable students is a recipe for disaster. No nation will long endure if its youngest generation is full of disdain, disgust and self-hatred. … Banning CRT is neither coercive nor liberty-infringing. Rather, it is a prudent and necessary first step to salvaging a fractious nation teetering on the brink of collapse.

But isn’t that what McLaughlin’s subconscious reprogramming effort is designed to achieve? Hawkes writes that “PERIL is now expanding its network of educators in Vermont and the wider northeast who are committed to learning more about the dangers of white supremacist extremism and far-right radicalization in youth.”

But isn’t it far-left extremism we are witnessing, incorporated into curricula behind parents’ backs? Vermont’s children are truly imperiled by PERIL. Vermont is an abolitionist stronghold, not a KKK home base. And even if white supremacy were on the rise, where is the evidence that this experiment on children’s subconsciousness is beneficial? There is none — it is a “theory” being tested on our children.

That doesn’t stop the left-wing radicalization of our youth by this America-hating crowd. Hawkes thanks the (ironically-named) Vermont Community Foundation for “their support of this phase of the work.” What is the next phase of “the work” that is to be inflicted on our children?

Ruppel and Hawkes unashamedly invoke the SPLC as authority for their “work.” This leads to grand depictions of building a new society where racism and bias are extinguished forever, and youth are to be brainwashed as “workers” in creating a “just and equitable society.” The fact that no such society has ever existed; that those who have attempted to use the State in this way have all failed horribly; that this toxic ideology will yield endless recrimination, tribalism, and human rights violations; that there is no model of the replacement society, or any evidence that this SPLC pogrom will be beneficial for Vermont children — those issues might understandably concern parents. Asking these important questions is not “limiting discussions of race.”

Another “resource” to assist in the ideological experimentation on Vermont’s children is American University:

Our team includes a range of methodologists who are skilled in process and impact evaluations as well as a range of quantitative, experimental and qualitative methodologies.

Ooh, methodologists teaching experimental methodologies to impressionable children! American University is teaching segregated classes through “affinity spaces,” just like Vermont — it’s experimental, harmful, and violates many laws. So much for keeping the experiments in universities, or “merely teaching history.” If CRT fans wish to form a private school to experiment on their children with, that is their right.

Social Justice Standards: The Teaching Tolerance Anti-bias Framework is a set of 20 anchor standards and 80 grade-level outcomes organized into four domains—Identity, Diversity, Justice and Action—that reflect the desired impact of successful anti-bias and multicultural education on student personal and social development. The standards provide a common language and organizational structure. Teachers can use them to guide curriculum development, and administrators can use them to make schools more just, equitable and safe.

This is social engineering, creating a new language and utopia. Equity is an impossible standard, and at odds with the Constitution.

As part of its teaching materials, the schools would ask children: “Can we have a just world where prejudice and discrimination exist?” Their answer is that, like the new secular CRT church of race genetics, they will craft this new world that has never existed, in which they will eliminate (rather than inflame, as they are actually doing) ”prejudice and discrimination.” Have they ever heard of scholar Thomas Sowell, who has repeatedly demonstrated the fallacy of in this political ideology? This is not about teaching — let alone “teaching history.” This is about indoctrinating without parental involvement.

Let’s follow this Yellow Brick Road to McLaughlin’s Land of Oz, where he will heal every heart of inner evil (and maybe get himself a new brain?). The materials he references show us the destructive road our children are being led (conditioned) down. Instead of being taught not to be bullies, they are being taught to attack bullies. Who are the bullies? Well, any white people who dare question CRT. And here we see the “next stage” of “action” planned for our unsuspecting children:

AC.16.  Express empathy when people are excluded or mistreated because of their identities and concern when they themselves experience bias.

AC.17.  Recognize their own responsibility to stand up to exclusion, prejudice and injustice.

AC.18.  Speak up with courage and respect when they or someone else has been hurt or wronged by bias.

AC.19.  Make principled decisions about when and how to take a stand against bias and injustice in their everyday lives and will do so despite negative peer or group pressure.

AC.20.  Plan and carry out collective action against bias and injustice in the world and will evaluate what strategies are the most effective.

This is not schooling: this is cult conditioning for political actuation of impressionable, vulnerable youth, for a controversial, extremist political movement. The vaunted Ruppel memo engrains failed socialist dogma: “Equity goes beyond formal equality where all students are treated the same. Achieving equity may require an unequal distribution of resources and services.” Then it makes this observation:

Our experiences over the last year and a half have told us that issues of diversity, particularly with regards to race, put our staff and students in a challenging situation. Particularly, staff have reported that they are often caught off guard and struggle to have important conversations about the impacts of systemic racism and privilege, particularly with low-income white students who also face systemic challenges that prevent them from having their material needs met. As in our earlier conversations with the board, we believe that these conversations best take place proactively as part of curricular study rather than reactively as matters of discipline.

That last observation reveals that white kids who question CRT because they themselves live in abject poverty are not to be punished. Wow — how inclusive, and educational. What exactly is the “proactive conversation” that teachers are to employ to answer that question about the ubiquitous white poverty in Vermont? What of Jews? Ruppel is silent on their “lived experience.”

Superintendent McLaughlin’s memo then attacked any parents who take exception to hateful experimental using a cultish ideology on vulnerable children:

As we just recently passed the 20th anniversary of the 9/11 attacks, I was remembering the intense sense of uniformity of purpose and togetherness that came on the heels of the attack. I was living in St Louis at the time, and the sense of national unification was palpable. Now, we find ourselves under attack in a different way, and I hope we can draw on that experience to once again come together for the collective good.

(Zach says he was referring to COVID here, but the division referenced in the memo is over CRT, not COVID.)

Where Americans have always “come together” is the Constitution, and the creed of equality. What didn’t prevail 20 years ago was the toxic, anti-constitutional rhetoric of CRT. Critical race theory is the most divisive, racist ideology to infect American shores since slaveholders perverted the Bible to justify their horrors. Is McLaughlin attacking those who cling to that MLK creed as “opposed to the collective good”?

Zach McLaughlin must resign and be banned from having any input into children’s education. The local Springfield School Board holds the constitutional power to determine what is acceptable for Vermont children, and this must be respected. Instead, this man set out to confuse and deceive, to advance his far-left political views.

Maybe Zach can find a job back in St. Louis for the Southern Poverty Law Center. He can take his Kool-aid with him on the way out the Vermont door. We won’t allow our children to be poisoned in this way, and we will never “come together” for an endless racist retribution.