Former Secretary of State John Kerry’s secret negotiations to try to preserve the Iran nuclear deal went well beyond what most past secretaries of state have done, a veteran expert on the Middle East says.

“Many former secretaries of state remain actively engaged in foreign affairs,” Jim Phillips, a senior research fellow at The Heritage Foundation, told The Daily Signal. “To my knowledge, one has never undermined a succeeding administration to this degree, especially with such a long-term adversary as Iran.” 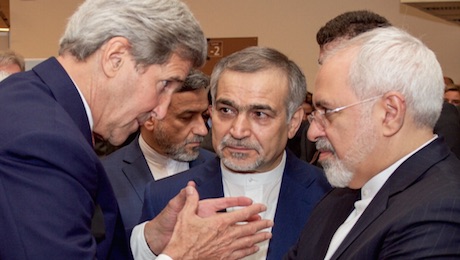 U.S. Secretary of State John Kerry speaks with Hossein Fereydoun, the brother of Iranian President Hassan Rouhani, and Iranian Foreign Minister Javad Zarif, before the Secretary and Foreign Minister addressed an international press corps gathered at the Austria Center in Vienna, Austria, on July 14, 2015, after the European Union, United States, and the rest of its P5+1 partners reached agreement on a plan to prevent Iran from obtaining a nuclear weapon in exchange for sanctions relief.

President Donald Trump announced in May that the United States was withdrawing from the Iran deal, which also included Britain, France, Germany, China, and Russia. Kerry oversaw the Obama administration’s negotiations of an agreement to slow Iran’s efforts to build nuclear weapons.

Kerry, a former U.S. senator from Massachusetts who was the Democrats’ presidential nominee in 2004, said Wednesday on commentator Hugh Hewitt’s radio show that he met with Iranian Foreign Minister Javad Zarif “three or four times” about salvaging the agreement.

“They say they’re prepared to negotiate and to resolve these issues,” he told Hewitt. “But the [Trump] administration has taken a very different tack.”

Kerry may have assisted Iran with one goal, Phillips said.

“Iran wanted to drive a wedge between the United States and European allies,” Phillips, who specializes in Middle Eastern affairs, said. “This undermines the Trump administration without producing any benefits for the United States.”

Some critics allege that Kerry, who has no official U.S. government authority, violated the Logan Act of 1779, which states:

Phillips noted that no one has been prosecuted under the Logan Act, so it would be a difficult case to make.

“We’re not going to comment,” said a White House National Security Council spokesman. “That a former secretary of state tried to interfere with current policy says everything.”

Some political observers say Kerry is considering challenging Trump in the 2020 presidential election.

In his interview Wednesday with Hewitt, Kerry confirmed previous reports that he met with Iranian officials. Those reports prompted Trump in May to charge Kerry of conducting “shadow diplomacy.”

The United States does not need John Kerry’s possibly illegal Shadow Diplomacy on the very badly negotiated Iran Deal. He was the one that created this MESS in the first place!

Kerry served as secretary of state during Barack Obama’s second term as president, from 2013 through 2016.

In 2015, he headed negotiations of the Joint Comprehensive Plan of Action, the U.S.-led multilateral agreement with Iran. The deal removed sanctions on Iran in return for the Islamist regime’s ceasing to develop nuclear weapons for 10 years.

“People talk about the Iran deal as Obama’s legacy, but it has Kerry’s fingerprints all over it,” Heritage’s Phillips said. “He also is responsible for the Syrian chemical weapons agreement. Syria violated that from the start. He didn’t seem aware the Iran deal could turn out the same.”