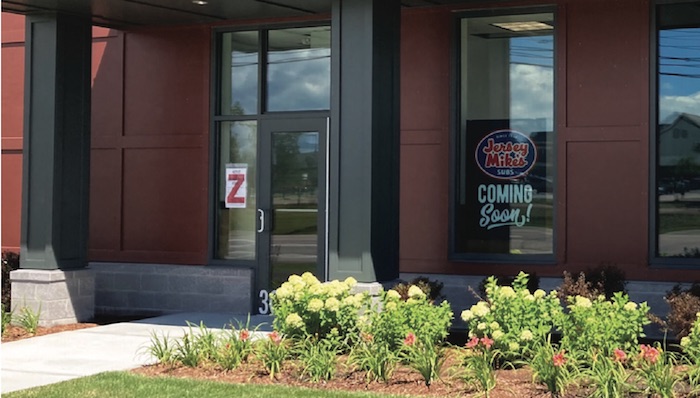 The Williston Jersey Mike’s store will be owned and operated by New Jersey native Tom King, who has Vermont connections as a graduate of UVM and as a frequent winter visitor to Waitsfield, where his family owns a home.

Jersey Mike’s Subs, Men’s Wearhouse and Crumbl Cookies will be opening in the Finney Crossing building anchored by L.L. Bean over the next several months.

This will be the first Vermont location for both Jersey Mike’s and Crumbl Cookies. The New Jersey-based sandwich chain will be the first of the three new businesses to open, welcoming customers by the end of this month.

“We are excited to bring Jersey Mike’s to Vermont. There will be more to come,” Jersey Mike’s Area Director Chad Faulkner said, hinting at other future locations in the Burlington area. The franchise has hundreds of locations nationwide.

The Williston store will be owned and operated by New Jersey native Tom King, who has Vermont connections as a graduate of UVM and as a frequent winter visitor to Waitsfield, where his family owns a home.

“My wife and I moved back to Vermont six months ago to open (the restaurant),” King said. “I feel like I’m coming home.”

Men’s Wearhouse is planning to move into the L.L. Bean-anchored building from its current location in Maple Tree Place. Finney Crossing developer Scott Rieley estimates the apparel store will open in its new home in October. This will be the second move for the Williston Men’s Wearhouse store, which was originally located on Route 2.

“I think they’re relocating because they’re having a brand new, custom, state-of-the-art store built for them, as opposed to an old legacy location,” Rieley said.

Crumbl Cookies, which has employed an active social media strategy to gain popularity — including 5.6 million followers on TikTok — is early in its planning for the Williston store, according to company spokesperson Rachel Fabbi. There is no estimated opening date yet.

“The (Williston) store is still in the very early stages, but we’re really excited for our franchise partners to open the first store in Vermont,” Fabbi said.

“We’re very very pleased with the progress (the property has) made,” Rieley said.