Two candidates for Congress disagree with Rep. Pramila Jayapal, a prominent endorser of Democratic State Sen. Becca Balint’s run for Congress, for her “no” vote on a bill to protect Supreme Court justices and their family. 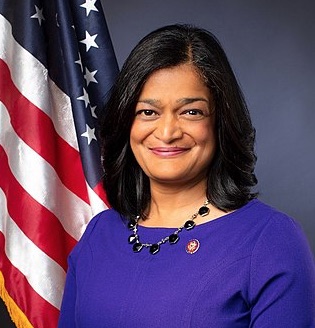 Jayapal is a leader in the House progressive caucus. On June 15, the Balint campaign published a press release proclaiming Jayapal’s support for Balint. “We are at a crucial moment in time for our democracy. As our rights to choose, to vote, and to love who we love are all being threatened, we need bold leaders in Congress unafraid to step up to fight for the rights of working people,” said Jayapal.

“Becca Balint is a fearless leader driven by her values and commitment to Vermonters. She has led the way on affordable housing, gun violence prevention, and reproductive freedom in the state,” she added.

This bill was approved by the Senate in mid-May.

Rep. Peter Welch was among the majority of Representatives of both major parties supporting the bill. Rep. Pramila Jayapal (D-Washington), who a day later endorsed Sen. Balint, was among the 27 House members to vote no.

Thursday, Vermont Daily Chronicle emailed Democrats Balint and Lt. Gov. Molly Gray and Republicans Ericka Redic, Liam Madden, and Anya Tynio and asked if they agree with Jayapal’s vote, and why or why not.

“No. I would have voted differently,” Madden — retired U.S. Marine — said. “Why? Because we don’t want the Supreme Court’s decisions influenced by intimidation.”

Tynio answered: “I disagree with her vote. In order to make judicial decisions free from intimidation and distraction we need to ensure the protection of the Justices, court employees and their families. It is extremely disappointing that any member of Congress would vote against protecting innocent people from violence.”

As of 12:52 pm neither Redic, Balint nor Gray had responded. Vermont Daily Chroniclewelcomes their responses – and those of any other U.S. House candidates – for future publication.