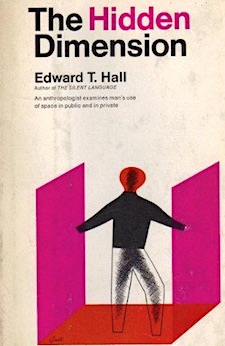 As we reflect upon the state of our world, our communities, our politics, our families and the nuts-and-bolts management of our day-to-day lives, it behooves us to consider how our environment affects our perception and judgment. Our success, after all, may very well be in the data we collect. If we don’t measure, we can’t manage.

In 1966, Edward T. Hall published “The Hidden Dimension,” which the Chicago Tribune called “one of the few extraordinary books about mankind’s future which should be read by every thoughtful person.”

Hall’s missive is a collection of studies on the visual, auditory and olfactory effects of stress among various groups of human and animal cultures. The following excerpts describe some of the conditions humans and animals have been facing for millennia. The success or failure of past civilizations is not only a reflection of how they coped with those conditions, but also a lesson for us to use as we navigate our own journey today.

“It is clear … that even the rat, hardy as he is, cannot tolerate disorder and that, like man, he needs some time to be alone.”

“Probably there is nothing pathological in crowding per se that produces the symptoms that we have seen. Crowding, however, disrupts important social functions and so leads to disorganization and ultimately to population collapse or largescale die-off. … Pansexuality and sadism were endemic. Rearing the young became almost totally disorganized. Social behavior of the males deteriorated … social hierarchies were unstable, and territorial taboos were disregarded unless backed by force. The extremely high mortality rates of females unbalanced the sex ratio and thus exacerbated the situation of surviving females.”

It is worrisome that world gender ratio statistics — male-to-female ratio of the total population of the world and of the U.S. — appear to support these assertions.

There is more. Consider Hall’s summary and the growth and sophistication of our communication technologies.

“The animal studies also teach us that crowding per se is neither good nor bad, but rather that overstimulation and disruptions of social relationships as a consequence of overlapping personal distances lead to population collapse.”

“Man and his extensions constitute one interrelated system. It is a mistake of the greatest magnitude to act as though man were one thing and his house or his cities, his technology or his language were something else.”

“The ethnic crisis, the urban crisis, and the education crisis are interrelated. If viewed comprehensively all three can be seen as different facets of a larger crisis, a natural outgrowth of man’s having developed a new dimension — the cultural dimension — most of which is hidden from view. People need to know that they are important. … The question is, How long can man afford to consciously ignore his own dimension?

Remember, Hall’s missive was first published more than 50 years ago and deserves a reading by today’s thoughtful people too — perhaps now more than ever before.

The full book can be read online here.

4 thoughts on “Eshelman: Is forewarned forearmed? Perhaps not.”