There appears to be some good news for those worried that New Hampshire’s aging population will lead to a shrinking workforce and ever-increasing numbers of elderly citizens drawing on public benefits.

A recent report from the University of New Hampshire indicates that between 2013 and 2017, the Granite State saw a net increase in the migration of younger individuals. At the same time, there was a net outflow of people older than 50.

“The average annual domestic migration gain was 5,900 between 2013 and 2017,” UNH Professor Kenneth Johnson wrote, citing numbers from the U.S. Census Bureau. “In contrast, only about 100 more people moved to New Hampshire than left it for other U.S. destinations annually during the Great Recession and its aftermath between 2008 and 2012.”

Johnson said that the single biggest change between those two time periods was seen in those in their 20s. The state had been losing about 1,500 twentysomethings between 2008 and 2012, but that turned dramatically into an increase of 1,200 a year from 2013 to 2017. 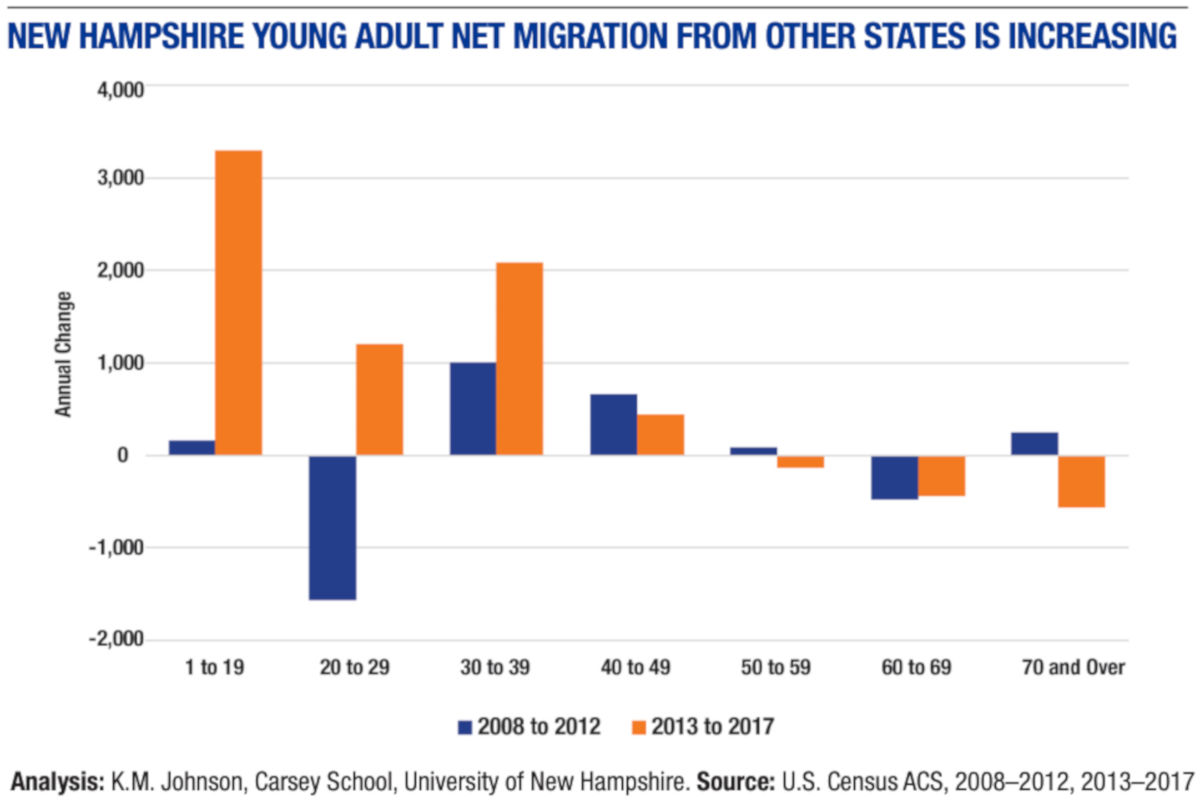 “As more family age adults migrated to New Hampshire, their children fueled a significant increase in the net influx of those under age 20,” Johnson wrote.

The report also indicated that New Hampshire is seeing a slight increase in immigration from overseas, combining with the domestic trends to reinforce the state’s working-age population.

“These recent domestic and immigrant migration gains are both modest, but they provide additional human and social capital to a state challenged by an aging workforce and population,” Johnson said.

The New Hampshire Democratic Party, noting that the time frame of the improved population trends coincided with former Gov. Maggie Hassan’s time atop state government, sought to give credit to the now-U.S. senator.

“As Governor, [Hassan] worked to make NH a more welcoming state that was attractive to young adults looking to settle down,” the party said on Twitter. “Clearly her hard work paid off.”

But to J.Scott Moody, CEO of the nonprofit Granite Institute, it’s overly simplistic to credit Hassan’s governorship with the positive data.

“It would be short-sighted to credit the [New Hampshire] Advantage to any one governor since it has been decades in the making and not entirely under our control, i.e., neighboring states enacting sales, income, and estate taxes,” Moody said. “That said, we can look at the NH Advantage Index to see the state’s performance over a given time-period. In particular, under Gov. Maggie Hassan the Index dropped by 5 percent to 51.3 in 2016 from 54 in 2012. That erosion in the index is not conducive to fostering increasing in-migration.”

Moody also pointed out that when she was Senate majority leader in 2010, Hassan was a proponent of an “LLC Tax” to make limited liability companies subject to the state’s interest and dividends tax. To Moody, that would have been a significant impediment to the New Hampshire Advantage – the state’s absence of sales, income and estate tax, which he argues are key to a healthy economic climate.

“Since jobs are the top reason for why people move, then a strong economy is a prerequisite to having strong in-migration,” Moody said.

Republican Gov. Chris Sununu, who is about to begin his second two-year term as Hassan’s successor, called attention to the positive migration numbers Tuesday morning on Twitter.

“It’s no wonder those in their 20s and 30s are flocking to New Hampshire,” he wrote. “From investing in education, to creating a job-oriented economy that’s stronger than ever, New Hampshire has become a destination for success.”