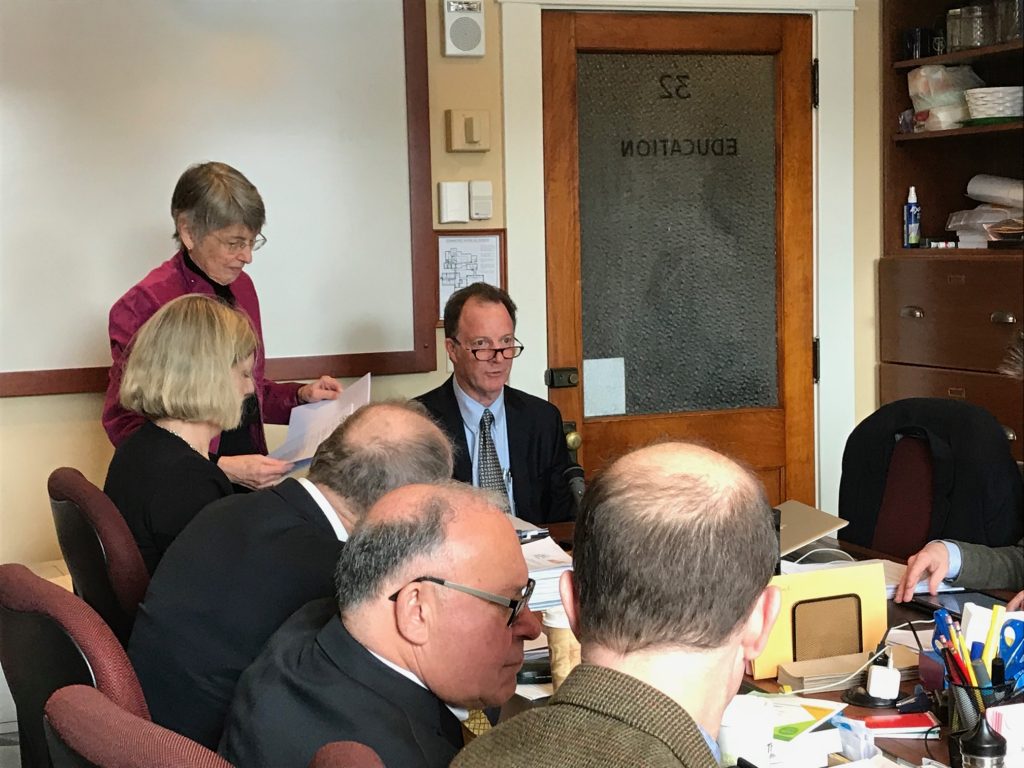 Michael Livingston, director of the independent Sharon Academy, spoke with the House Education Committee on Wednesday to discuss the key challenges his school faces on special education. The academy practices “open enrollment,” or accepting special needs students without screening.

“The education landscape has changed so much in the time that I entered the Sharon Academy, even in just the last 3-to-5 years,” he said. “We just hired our second special educator in our school of 150 students, mid-year this year, to address concerns that we see are coming.

When committee members asked what factors were behind the increased pressure, Livingston, who has four decades of experience in education, said reasons include opioid and alcohol addiction in the home, overworked single parents and poverty.

“This device [the smart phone] has served us not well at all with our teenagers,” he said. “If you are 14 years old, you were 4 when this thing came on the market. It’s been part of your hand, an extension of your body.”

A 2015 report by the Boston University Medical Center makes similar assertions that tablets and smartphones are negatively impacting child and teenage development.

He said today’s video games are so addictive that he knows of kids who stay up until 4 a.m. with gadgets before grabbing a quick nap and heading off to school in the morning.

Such problems come as a National Center for Health Statistics survey of parents reports a national trend in rising autism. The rate for autism spectrum disorders is now 1-in-36 children, up from 1-in-41.5 children in 2015.  The Centers for Disease Control in 2016 listed the autism rate at 1-in-68 children, but a revised figure is expected in the coming months.

Livingston said the result is that children are experiencing severe stress. “The amount of anxiety that we deal with on a daily basis in school — and this isn’t just at Sharon Academy, this is from conversations I’ve had with principals at all levels — is staggering.”

Under current guidelines, contracts for each special needs service varies per supervisory union. The process is especially complicated when schools must take in students from multiple supervisory unions.

“I would like to see … more uniformity there because right now we are spending a lot of time sending proposals and emails for contracts back and forth trying to negotiating things,” Livingston said. “It’s not clear to us what the agreements and understandings are even for some of the other schools in the same SU.”

Another issue relates to the economy of scale, especially for a small school like Sharon.

“You don’t start with 15 or 20 students in a specific category of disability, you get one or two,” he said. “And then you have to go find a special educator who will meet those students once or twice a week at different days at odd times. And in the arena of speech and language that’s almost impossible.”

According to Livingston, the solution for uniformity and scale could be some wider regional or statewide system for special education administration. This proposal falls in line with the recommendations of a special education spending study by professor Tammy Kolbe of the University of Vermont, which was presented at the Statehouse early in January.

The study also suggests that Vermont is spending around twofold the national average per special education student.

Rep. David Sharpe, D-Bristol, chair of the House Education Committee, proposed a special education administration system that is somewhere in between the case-by-case status quo and a statewide system.

“What might your receptivity be to a special ed consortium or cooperative of, say, 20 towns in numerous SUs? What if those numerous SUs were one entity for special ed? What if you were included in that and what would that look like to you?” Sharpe asked.

Livingston said his feelings are mixed on the idea, noting that as a small-school community there’s a certain expectation that each student receives a level of attention not common to big programs.

“There needs to be that level of interaction,” he said. “But when it comes to special ed and looking at the number of providers out there, trying to figure out how to meet these very needs, it may be that it’s much easier if it’s coordinated from a central entity that way.”