In one of the bluest states in the nation, voters soundly rejected proposed changes to election law that congressional Democrats are trying to impose nationally.

New York state voters voted “no” on Democrat-supported amendments to the state Constitution, pitched as “voting rights” measures, that would have expanded absentee voting, allowed same-day voter registration, and changed the rules on drawing legislative districts.

Democrats in the U.S. House of Representatives this year have passed four bills that were variations of their initial bill, HR 1, dubbed the “For the People Act.” The measures would ban most state voter ID laws, allow same-day voter registration, expand ballot harvesting, and require unelected commissions instead of elected legislators to draw congressional districts. 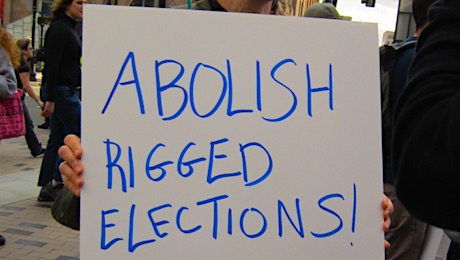 Already, New York is among 15 states that don’t have laws requiring voters to show identification at the polls. The other measures rejected by state voters, however, would have moved the Empire State even closer to the vision laid out in national Democrats’ HR 1.

In each case, including this week, filibusters by Senate Republicans blocked Democrats’ election bills—and each time Democrats claimed the GOP was blocking the will of the people.

The three New York ballot measures put that Democrat claim to the test, as state voters decisively defeated all three measures despite the party’s strong advantage in voter registration.

Polling by the Honest Elections Project shows the Democrats’ goals for nationalizing elections and nullifying state voting laws are unpopular.

That’s because voters’ access to the ballot and the integrity of the ballot are intertwined, not mutually exclusive, said Jason Snead, executive director of the Honest Elections Project.

“We know for a fact that a lot of the provisions of HR 1 are deeply unpopular. … You can look at the results of the ballot initiatives in New York and it shows this is not a statistical anomaly in polling,” Snead told The Daily Signal.

Election reforms likely will be on the ballot in Arizona and Pennsylvania in coming election cycles, he said.

Make Sure You Flip Your Ballot Over and Vote Yes to All Proposals Today!
#VoteYesToAll #ElectionDay pic.twitter.com/LzIAiEtvay

The defeat of the three Democrat-backed election law amendments was even more pronounced by the fact that two other Democrat-backed amendments—one making clean air and water a constitutional right, another expanding the jurisdiction of the New York City Civil Court—easily passed.

“All three resoundingly defeated,” Nick Langworthy, chairman of the New York State Republican Committee, said in a public statement after the vote. “People of all party affiliations voted to keep fair and honest elections in this state.”

But Susan Lerner, executive director of Common Cause NY, said the outcome is a “black eye for democracy.” Lerner, whose group supported the ballot measures, also blamed former President Donald Trump and “anti-democracy forces” for the loss.

“Donald Trump successfully infected the Republican Party by propagating the Big Lie and his onslaught of attacks have destabilized the country,” Lerner said in a public statement. “These results are a cautionary tale, showing that even in deep blue New York, we can’t take pro-democracy outcomes for granted.”

Fully 56% of New York voters rejected Proposal 1, which would amend the redistricting process by, among other things, protecting the counting of noncitizens and prisoners in determining legislative districts.

In 2014, New York voters approved an amendment to the state Constitution to allow a bipartisan commission to handle the redistricting process. The proposed change would have fixed the number of state senators at 63 to prevent the adding or subtracting of Senate seats.

Proposal 3, which would have paved the way for same-day voter registration, suffered an even more crushing defeat as 58% of voters rejected it.

The state Constitution currently requires that voters be registered at least 10 days before an election to be eligible to vote. The change would have eliminated the requirement.

New Yorkers came out to vote and clearly said NO to the dangerous proposals on the ballot and rejected the legalization of rigged elections in New York. WE DID IT! #JustSayNoNYhttps://t.co/LrcXb2qRi2

Proposal 4, which also went down with 56% voting no, would have authorized “no excuse” absentee voting, something already available in many states.

Such absentee voting means a voter doesn’t have to demonstrate that he or she will be working late or out of town on Election Day in order to be allowed to vote by absentee ballot.

The state effectively waived that requirement with mass mail-in voting in 2020 during the COVID-19 pandemic.

Georgia and Florida, which the left heavily criticized for passing voter ID laws for absentee voting earlier this year, are among 34 states that allow no-excuse absentee voting. A total of 20 states have Election Day voter registration, according to the National Conference of State Legislatures. The District of Columbia has both.