President Donald Trump has pardoned Peas, a 39-pound turkey that traveled all the way from South Dakota to be dubbed the 2018 National Thanksgiving Turkey.

Reporters, White House officials, and families gathered Tuesday in the White House Rose Garden to witness one of America’s most unusual traditions.

Americans this week were given the opportunity to vote on which turkey—Peas or buddy Carrots—should receive the formal presidential pardon, sparing him from becoming Thanksgiving dinner. 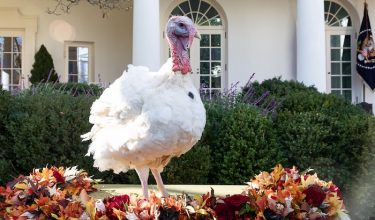 Trump added: “Even though Peas and Carrots have received a presidential pardon, I have warned them that House Democrats are likely to issue them both subpoenas.”

The nation chose Peas, but Trump pardoned both.

Trump drew laughter from the crowd when he put a political spin on the action.

“This was a fair election. Unfortunately, Carrots refused to concede and demanded a recount, and we are still fighting with Carrots. And I will tell you, we have come to a conclusion,”  the president said. “Carrots, I’m sorry to tell you: The result did not change.”

Trump added: “Even though Peas and Carrots have received a presidential pardon, I have warned them that House Democrats are likely to issue them both subpoenas.”

“All joking aside,” the president said, “this is a time for Americans to unite together in a spirit of love, understanding, unity, and joy, as one very proud American family.”

Peas and Carrots will live out their days at Virginia Tech’s “Gobbler’s Rest” in Blacksburg, Virginia, where they will be cared for by veterinarians at the school’s College of Agriculture and Life Sciences.

The informal tradition of pardoning a turkey before Thanksgiving is actually relatively new, but turkeys and other birds have been delivered to the White House for various purposes for many years.

Presidents were gifted turkeys from friends and supporters beginning in the 1870s, according to White House history. President Harry Truman, contrary to popular myth, did not begin the turkey-pardoning tradition.

Truman became associated with poultry during the fall of 1947, when the government encouraged “poultry-less Thursdays” so that Americans would cut back on food waste following World War II.

Realizing that Thanksgiving and Christmas of 1947 and New Year’s Day 1948 were all to fall on Thursdays, poultry producers protested the president’s anti-turkey campaign by sending crates of live chickens to the White House.

Unfortunately for turkeys all over the country, the protests were effective, and Truman backed off his anti-poultry campaign.

In December of that year, the Poultry and Egg National Board and the National Turkey Federation gave Truman a turkey as a gift. For the next 20 years or so, presidents were presented with a turkey every holiday season. Occasionally, the president “pardoned” the bird as a goodwill gesture.

President Ronald Reagan was the first to consistently send the presented holiday turkey to a farm to live out its days, and was the first to use the term “pardon” in association with the birds.

NPR recounted the humorous bit of history in a recent article, explaining that in 1987, Reagan determined that a turkey named Charlie should live out its days at a local petting zoo.

Shortly after the lighthearted ceremony, a reporter asked Reagan whether he would pardon two of the individuals involved in the Iran-Contra scandal at that time—Oliver North and John Poindexter.

The president deflected the question by responding: “If they’d given me a different answer on Charlie and his future, I would have pardoned him.”

It was President George H.W. Bush who, in 1989, first formally pardoned the Thanksgiving turkey and made the ceremony an American tradition.