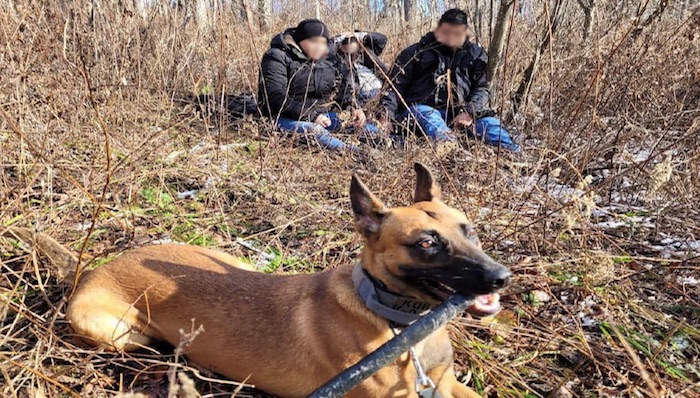 Canine “Kora” recently aided Border Patrol Agents with the apprehension of five subjects from Mexico hiding in the brush near the U.S./Canada border in Troy, VT. One of the five had previously been removed from the U.S. twice in 2016.

Foreign nationals illegally entering the U.S. are increasingly entering through Vermont at an unprecedented rate.

In October, the Swanton Sector of U.S. Customs and Border Protection, which includes all of Vermont, saw a 676% increase in apprehensions of illegal foreign nationals compared to last year, according to Border Patrol data. Agents apprehended 334 people from 19 countries in October, and the “upward trend continues,” Swanton Sector Chief Border Patrol Agent Robert Garcia said.

Since then, the numbers have gone up. According to preliminary data for November obtained by The Center Square from a Border Patrol agent, Swanton Sector agents apprehended 445 illegal foreign nationals and reported 313 gotaways – individuals who evaded law enforcement as they made their way into the U.S. illegally.

Garcia this week described a successful apprehension of five Mexicans hiding in the brush near the U.S./Canada border in Troy, Vermont. Agents were assisted by a BP canine named Kora who tracked them down. After performing a records check, agents discovered that one of them had been previously removed from the U.S. twice in 2016 and was caught illegally entering through Vermont this time.

A few days earlier, agents rescued a disoriented family from Mexico in Vermont and a Haitian in northeastern New York. Garcia put out a warning on social media, saying, “Reminder: crossing the border illegally is not only a crime, it’s dangerous.”

On Dec. 2, BP agents, assisted by a local resident, rescued a Mexican family with small children in Churubusco, New York, who were disoriented due to weather-related trauma as they illegally crossed into the U.S. from Canada.

After stopping a vehicle of a suspected human smuggler near the U.S.-Canada border, agents learned through roadside interviews that a group of Mexicans was attempting to navigate a heavily wooded area in near-freezing temperatures. A local resident contacted Border Patrol after finding them and providing them with shelter.

Agents then learned that some of them, including the children, had lost or abandoned their wet shoes and were walking barefoot in near-freezing temperatures when they were rescued. Agents at the Burke Border Patrol Station provided them with clothing.

“Attempting to cross the border illegally carries with it many consequences, not just administrative and criminal actions against the violator. This event could have turned tragic,” Burke Station’s Patrol Agent in Charge Richard Parker said, while also thanking the agents and resident for saving their lives.

On Dec. 3, an agent on patrol witnessed an individual collapse in downtown North Troy, Vermont. The individual was verbally unresponsive and in obvious physical distress. The agent requested Emergency Medical Services and additional agents arrived to provide support until EMS arrived. The individual, a Haitian in the U.S. illegally, was transported to North Country Hospital in Newport, where he was admitted for hypothermia and other medical issues exacerbated by prolonged exposure to rain and cold temperatures. He was later transferred to University of Vermont Medical Center in Burlington for further treatment.

Medical expenses of illegal foreign nationals, unless paid for by a nonprofit, are largely passed on to local taxpayers. Small rural Texas border counties, for example, are paying a disproportionate share that even Democratic officials say they can’t absorb. The Democratic mayors of Washington, D.C., New York City and Chicago have all declared emergencies saying their cities can’t afford to care for the influx of people being released into the U.S. arriving in their cities by bus from Texas.

“The dangers posed by trying to cross the border illegally, especially during winter months, are very real and can be fatal,” Patrol Agent in Charge Michael Shick said, adding that these types of rescue efforts are “a perfect example of the work that agents encounter and are prepared to deal with on a daily basis.

“Although this incident resulted in a rescue, the reality is that this situation could have ended in a recovery and as we get deeper into the winter months the likelihood of these types of encounters ending poorly rises exponentially.”

Swanton Sector agents are responsible for securing the land border between Canada and Vermont, New Hampshire, and northeastern New York. U.S. citizens are encouraged to report suspicious activity to Border Patrol at 1-800-689-3362.

6 thoughts on “Illegal entries into Vermont surge in November”