For Bennington resident Kevin Hoyt, the battle for Vermont’s heart and soul hasn’t changed much in over 200 years.

The internationally recognized sportsman and gun-rights advocate says his ancestors fought in the American Revolution in Vermont for the same rights being fought over today. 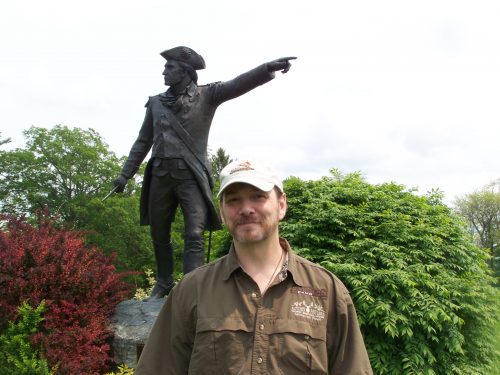 Kevin Hoyt: “My family were pioneers here since the 1630s, before the land was even called Vermont. … They were American patriots. It’s amazing to me that the Hoyts were fighting over the exact same rights and freedoms as many of us are fighting for on the same soil today.”

Hoyt, 49, a 2018 Republican candidate for the Vermont House, says he is considering a run for the state Senate in 2020. He believes he could win despite being “in limbo” over a hunting-related lawsuit brought by the state.

In April, Hoyt was charged with a hunting violation and with impeding a state game warden. He was charged by the Vermont Fish and Wildlife Department in Bennington Superior Court Criminal Division for taking one deer more than Vermont’s three-deer limit.

On May 17, however, the Bennington County State’s Attorney’s Office dismissed the charges against Hoyt.

In an unprecedented move, a dissatisfied Hoyt asked a district court judge to deny the state’s motion to dismiss the charges against him and to proceed to trial. What complicates the matter is that Hoyt claims the charges brought against him were politically motivated, and that a trial will be necessary to clear his name.

Hoyt hasn’t heard a word from the state about what will happen next. The native Vermonter says the state doesn’t want to give him a platform to present evidence of alleged collusion involving his 2018 opponent, state Rep. Chris Bates, D-Bennington. According to Hoyt, the case involving the deer was launched at Bates’ behest, and was meant to intimidate him because he’s an outspoken gun-rights advocate.

Since last month, Hoyt has been asserting on social media and elsewhere that Bates is a “fugitive” wanted in Illinois. 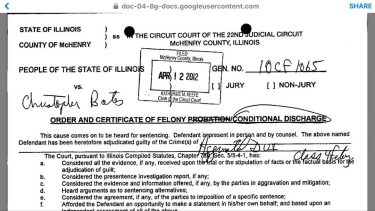 According to McHenry County, Ill., court records Hoyt provided to True North, Bates was found guilty of a Class 4 felony aggravated DUI and was granted a conditional discharge in 2012. In Illinois, a person convicted of aggravated DUI and offered a conditional discharge must spend a minimum of 10 days in jail or perform 480 hours of community service.

An additional court document shows Bates was placed under the court’s jurisdiction for 18 months to satisfy the remaining conditions of his sentence. The fines, costs and fees imposed by the court amounted to $2,401, according to the document.

As first reported by Seven Days, Bates has an outstanding arrest warrant in Illinois for a failure to appear in court and to pay fees related to the 2012 conviction. Bates moved to Vermont that same year. Bennington Police Chief Paul Doucette told Seven Days the out-of-state warrant is not enforceable in Vermont “unless extradition is approved.”

Even so, Hoyt argues that Bates remains “a fugitive” even while serving as a Vermont state legislator.

While Bates told the Bennington Banner last month that he expected his legal problems with the state of Illinois to be “all cleared up in the next week or so,” his situation appears to be progressing more slowly.

“This is being cleared up, as I told the Banner, but it’s taking a little bit longer than we thought,” Bates said Thursday. “I have to make sure the court in Illinois has all the proper personal information from me. I am doing this through my attorney. All the fines are paid (down).”

In response to the claim that he’s a fugitive, Bates replied, “Wrong. I am not a fugitive.” 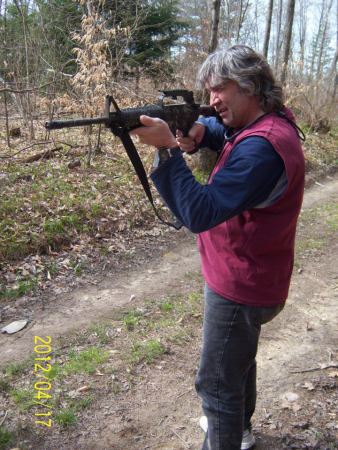 Vermont Democratic Rep. Chris Bates has supported gun-control efforts in Montpelier despite having once been a gun enthusiast. Here Bates stands shooting what gun-control advocates call an “assault rifle.”

But Hoyt also is accusing Bates of “hypocrisy” regarding his support of gun control bills in Vermont — such as S.169, the Legislature’s proposed 24-hour waiting period for gun purchases. Hoyt says Bates is a gun enthusiast, and he provided True North a 2012 photo of Bates shooting a so-called assault rifle — a sporty firearm design that many gun-control advocates have sought to ban.

Bates told True North that his support for gun laws is “all about safety and education first.”

“Sure, at one time I owned guns, but I am now a total angler,” Bates said. “I was a bird hunter … (and) hunting here in Vermont is not what it is in the Midwest; I wouldn’t waist time shooting the tiny deer here.

“As to my support of the 24-hour gun check rule, well, there were several parts to that state gun bill. To get the parts the people wanted, you had to vote for all or there’d be no bill. … The 24-hour wait wasn’t my favorite thing, but it didn’t look to me as a (gun-control) issue.”

In addition to changing states in 2012, Bates made other significant changes in recent years. He was a Republican until 2015, when he decided that he disagreed with various aspects of the party’s platform.

“I was always a moderate Republican, and then when Donald Trump started to emerge on the scene, I didn’t like him or his policies. So, I went independent in 2015 (and) then I remained an independent until 2018,” he said. “I’m a Bluedog (Democrat); a moderate is a moderate, which means I am fiscally responsible. By no means did I quit the GOP just to get elected.”

Hoyt told True North he has additional details about Bates’ past run-ins with the law, but that he isn’t able to speak about them due to legal constraints.

For now, Bates is denying at least one accusation made against him from his past.

According to a complaint filed in Cook County, Ill., in 1985, Karen Bates, his former wife, alleged that Bates threatened her with a loaded shotgun. Asked Thursday about the allegation, Rep. Bates told True North, “I never pointed a gun at Karen.”

Hoyt says he’s moving ahead with his 2020 political aspirations even while waiting for the court’s next move on the deer hunting case.

“My family were pioneers here since the 1630s, before the land was even called Vermont,” he said. “My four-time great-grandfather Harry Hoyt was the first free Hoyt; he and his father David fought against an oppressive government (Great Britain) on this very soil. They were American patriots. It’s amazing to me that the Hoyts were fighting over the exact same rights and freedom as many of us are fighting for, on the same soil, today.”

Hoyt has been an outdoors instructor for 30 years. He says he managed to avoid getting involved in politics until it became necessary.

“I wasn’t political until I believed I had to speak up,” he said. “But it’s up to citizens to get involved. You can’t let someone else (who may not have your interests) take care of things.”