The ongoing process of “weaponizing and abusing mail-in voting” could lead to an “unprecedented constitutional crisis” because of lack of reliability and the potential for fraud, a new report from two House Republicans contends.

Earlier this year, all mail-in balloting in a Democratic primary for a House seat in New York led to six weeks of dispute before a winner was determined. In another case, officials rejected 1 in 5 ballots as fraudulent in a Paterson, New Jersey, election.

In 2005, a report by the Commission on Federal Election Reform, chaired by former President Jimmy Carter and former Secretary of State James Baker, determined that voting by mail “remain[s] the largest source of potential voter fraud.”[/caption]“This expansive and late shift to all-mail voting will create conditions ripe for election crime, errors, inaccuracy, and delay,” says the staff report from Reps. Jim Jordan, R-Ohio, and James Comer, R-Ky., both members of the House Judiciary Committee. 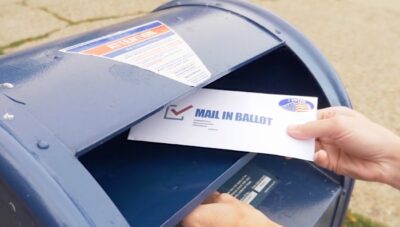 In 2005, a report by the Commission on Federal Election Reform, chaired by former President Jimmy Carter and former Secretary of State James Baker, determined that voting by mail “remains the largest source of potential voter fraud.”

Democratic lawmakers in Wisconsin, Florida, Georgia, Pennsylvania, Minnesota, and Nevada have pushed risky policies on mail-in voting and ballot harvesting, a process that allows political operatives to gather ballots from voters, according to the report from Jordan, the committee’s ranking member, and Comer.

“If they are successful, Democrats could be sowing the seeds for an unprecedented constitutional crisis,” the report says, citing recent cases.

The report notes that voter registration numbers exceed 100% of the eligible voters in 378 counties across the United States.

In 2005, a report by the Commission on Federal Election Reform, chaired by former President Jimmy Carter and former Secretary of State James Baker, determined that voting by mail “remain[s] the largest source of potential voter fraud.”

The House Republicans’ new report notes that two prominent liberal newspapers, The New York Times and The Washington Post, have referred to problems with mail-in ballots.

Also in October 2012,  the Post reported that it “may still be possible to steal an American election, if you know the right way to go about it” in efforts to sell votes.

The Post continued: “Recent court cases, from Appalachia to the Miami suburbs, have revealed the tricks of an underground trade: Conspirators allegedly bought off absentee voters, faked absentee ballots, and bribed people heading to the polls to vote one way or another.”

Typical elections in the United States consist primarily of in-person voting, for which states have established procedures, including basic safeguards to ensure that the person voting is an eligible voter in the proper jurisdiction. This year, however, some Democrat-run states have belatedly changed election administration procedures and moved to all-mail balloting—meaning that as many as 44 million total ballots will be mass-mailed to registered voters with no assurance the ballots reach the right person.

In Wisconsin, Democrats sued to extend the deadline for absentee ballots in the April primary election. A Democratic-appointed judge ordered the state to extend that  deadline to a week after Election Day. But the U.S. Supreme Court overruled him.

Democrats in Florida and Georgia are trying to require prepaid return postage for mail-in ballots. New York was supposed to provide prepaid postage, but failed, leading to the six-week House primary. Expanding this could cause a repeat of that failure, the report says.

“A repeated failure of this type would cause tremendous confusion about the timeliness of ballots—creating uncertainty, inaccuracy, and litigation in the election results,” the report says.

In Nevada, Democratic lawmakers expanded ballot harvesting to allow political operatives and other third parties to collect ballots from voters with the promise of submitting them on their behalf.

In Minnesota, Democrats have pushed for eliminating witness and notary requirements for mail-in ballots.

Democrats in both Wisconsin and Minnesota are trying to extend deadlines for receipt of mail-in ballots to be received. The new report says this change risks “creating conditions ripe for inaccuracy, confusion, litigation, and delay in election results.”