By Jude Schwalbach | The Daily Signal

On Sept. 20, 2017, Hurricane Maria slammed the U.S. territory of Puerto Rico, devastating homes and infrastructure and leading to loss of life across the island.

The storm greatly exacerbated the problems of a school system already in crisis: Puerto Rican fourth- and eighth-graders, for example, are roughly five grade levels behind their U.S. mainland peers in mathematics.

Out of the devastation wrought by Hurricane Maria came an opportunity to reform the ailing education system on the island.

Notably, the education reforms introduced by the territorial government and supported by Puerto Rico Secretary of Education Julia Keleher, along with Gov. Ricardo Rossello, include a pilot school-voucher option and the introduction of charter schools.

The introduction of education choice in Puerto Rico didn’t come without pushback from special-interest groups, however. 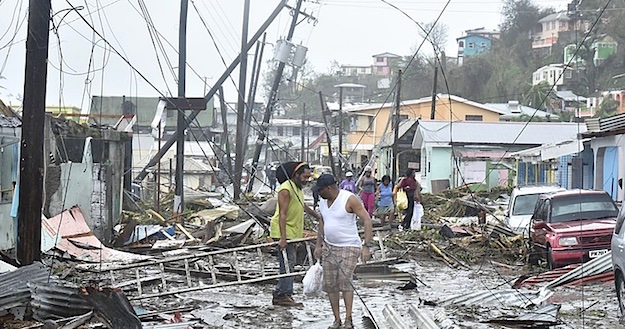 DEVASTATION: Hurricane Maria struck Puerto Rico as a Category 4 hurricane, the worst tropical storm to hit the territory since 1928.

The ability for the island to introduce parental school choice is a win for families.

The need for better educational opportunities is evidenced by low levels of academic performance. For example, the percentage of fourth-grade students in Puerto Rico who performed at or above the “Proficient” level in math rounded to 0 percent in 2017.

Among the population of Puerto Ricans ages 25 years and older in the year 2000, four out of 10 had not received a high school diploma—about double the rate of the mainland population.

With more than 40 percent of the Puerto Rican population below the federal poverty line, ZIP codes trap families in failing schools. The personal choice and freedom that the new voucher and charter options will afford to Puerto Rican families have the potential to disrupt the territory’s stagnant education monopoly.

Take Jennifer Gonzalez Muñoz, who works at a cafe and cannot afford the tuition to a private school that would treat her 6-year-old son Jacob’s speech disability. Even though Muñoz has repeatedly addressed the problem with school officials, Jacob continues to be bullied at school.

School choice options are designed to help children like Jacob, whose family cannot escape a school environment that isn’t the right fit for him.

The school was designed with the express purpose to “break the generational cycle of poverty.” Proyecto Vimenti’s curriculum was modeled after the island’s most prestigious private school to give low-income families access to better education.

Giving families a diverse array of school options is important, because no two children are alike, and each student has his or her own learning styles and preferences. Introducing innovative and diverse schools that cater to students’ various learning styles will help students find the education they need.

Tailoring education to each student prepares students for life after the classroom.

Puerto Rico also introduced the Free School Selection Program, a private school scholarship that helps families pay for tuition. The scholarship program will assist students with special needs, those who are from low-income families, and who have been victims of bullying or sexual harassment.

The voucher option, which will begin during the 2019-20 school year, will empower parents to use the funds to pay for private school tuition, enabling their children to receive an education that is the right fit for them.

Puerto Rico should build on these promising reforms and expand the vouchers’ scope and eligibility significantly in future years, especially in light of the remarkable support for universal vouchers among Hispanic families.

Expanding the voucher program to look more like Arizona’s education savings accounts would be a great boon to many of Puerto Rico’s families. Arizonans can use their accounts not only for tuition, but also for private tutoring, school supplies, education therapy, and much more.

Moreover, school choice options have the potential to save money for the territory, which is heavily in debt.

Puerto Rico has more debt than the top five municipal bankruptcies combined, including Detroit’s, due in part to unfunded pension liabilities.

Territorial debt is driven to a significant extent by the $49 billion in outstanding pension obligations, which include some $13 billion for retired teachers and school personnel. Such debt is untenable, particularly when large swaths of the working-age population leave the island.

States have shown increasing support for school choice and parental empowerment in the past two decades. Instead of government-controlled education, school choice policies provide neutral aid that places educational choice in the hands of parents who know their child’s needs, hopes, and aspirations better than anyone else.

The charter school and voucher program victories are a great start for school choice opportunities in Puerto Rico. School choice ensures that all children have the opportunity to learn, and puts education in the hands of parents, instead of the state.

Puerto Rico’s empowered parents can now find the education that is best for their children.