The introduction of penicillin in the 1940s was a revolution in medicine. Within a decade of its widespread use, however, bacteria began to develop resistance to the drug.

Since then, pharmacologists have been waging an ongoing battle to overcome infectious microbes’ resistance to lifesaving drugs. The Democrats’ insistence on single-payer health care and demonization of pharmaceutical companies may kneecap these efforts.

For example, researchers are growing more alarmed that microbes will begin adapting more quickly than pharmaceutical developments, such as in the case of methicillin-resistant Staphylococcus aureus, or MRSA. 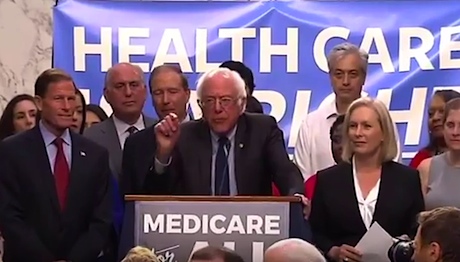 In Sanders’ signature “Medicare for All” bill, drug prices would be essentially set by the secretary of health and human services.

This is a disastrous possibility, and it would become even more plausible by destroying the profit motive that drives the industry to create new antibiotics.

In several tweets, Sen. Bernie Sanders, I-Vt., hinted that this is exactly his aim. He complains that the “drugmakers make huge profits off medication developed with taxpayer-funded research.”

In reality, most of the funds in medical research come out of those drugmakers’ revenues.

In 2017, the United States spent $182.3 billion in medical research, but less than $40 billion of that was federal spending. In fact, the largest portion of medical R&D dollars came from industry investment totaling $121.8 billion.

In Sanders’ signature “Medicare for All” bill, drug prices would be essentially set by the secretary of health and human services. Once Medicare for All empowers the secretary to decide the appropriate revenue for a drug company, what will happen to that $121 billion of research investment?

Fortunately, the Centers for Medicare and Medicaid Services under the current administration shows a different path in a final rule issued early in August.

The rule introduces add-on payment pathways for newly developed antibiotics that are designated “qualified infectious disease products” by the Food and Drug Administration.

To incentivize private drug development, this designation is granted by the FDA and reserved for new antibiotics to treat infections from new or drug-resistant pathogens.

In general, new drugs are granted periods of exclusivity by the FDA that are separate from patent protections, lasting from three to seven years depending on the drug. A “qualified infectious disease products” designation would extend this period by an additional five years.

In addition to offering greater protections for new drugs, the rule also increases the add-on payment from 50% of costs to 75% for qualified infectious disease products, and it considers them new products rather than improved products, which would eliminate the need to show “substantial clinical improvement” over an existing drug.

The criteria for substantial clinical improvement were vague and unclear, so forgoing this requirement significantly lowers the bar for introducing new antibiotics.

Rather than imposing strict regulations from a federal office onto firms and how they operate their businesses, the Centers for Medicare and Medicaid Services is leveraging the substantial medical and pharmaceutical industry to tackle an impending health crisis.

Drug-resistant strains of bacteria infect over 2 million people each year, according to the Centers for Disease Control and Prevention, and over 20,000 of them ultimately succumb to those infections.

Because of the difficulty in eradicating the bacteria and the potential toxicity of the treatment involved, hospital stays that are complicated by drug-resistant organisms are often prolonged and costlier, adding up to $20 billion in health care costs annually.

Government spending, where appropriate, should be directed at enabling private industry to innovate solutions, particularly one so pressing as multi-drug resistance. In this case, pharmaceutical companies will have access to add-on payment incentives if they develop and introduce new drugs.

The single-payer vision, which sees the government as capable of being the solution, would slash pharmaceutical revenues in pursuit of controlling prices. Presumably the government share of research and development, which was $39.5 billion, would then become the primary source of funding.

$39.5 billion amounts to less than 22% of the total spent on research.

As with any other enormous legislative package, unintended consequences are the norm rather than the exception. In this case, Medicare for All could lead to the loss of effective antibiotics for these highly virulent strains and the undoing of decades of medical progress.