How far would our Legislature go to reduce the transmission of Covid-19?

Across the globe, democratic nations are forcibly relocating citizens to quarantine camps (Australia); imposing lockdowns on unvaccinated citizens (Germany), and locking down the unvaccinated and threatening them with fines if they do not comply with compulsory vaccination (Austria). 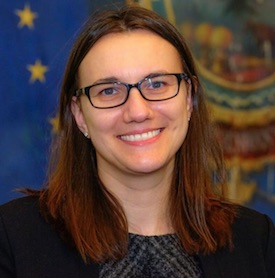 Here in Vermont, the Legislature passed a municipal mask mandate, giving local governments the power to require masks in public places. The Progressive hometowns of House Speaker Jill Krowinski (D-Burlington) and Senate Pro Tem Becca Balint (D-Windham County) of Brattleboro promptly passed mask mandates. So has the tourist-friendly ski town of Warren. However, the equally left-leaning city council of blue-collar Barre (“Granite Capital of the World”) took no action Monday night after a large group of residents and business owners showed up in opposition.

But according to Krowinski and Balint, the municipal mask mandate doesn’t go far enough. The ‘victory lap’ celebration was somewhat subdued at the press conference they held minutes after the bill passed. They were clearly focused on the Next Step – whatever that might be.

Krowinski said that “all options are on the table” when the Legislature returns in January. Between now and then, the Legislatue will be watching caseloads and responses to the municipal mandate. Other measures, including enhanced testing, contact tracing, and a statewide mask mandate, will be advanced if deemed necessary, she said.

When asked by reporters if other measures would be proposed, Krowinski said “we need a break [before we] “go around the table and ask, ‘how can we solve this current problem?’”

Relatively unnoticed during the Special Session, a resolution was passed by the Vermont Senate (18 yes, 9 no) urging Gov. Scott “to use all possible public health measures to reduce the number of COVID-19 cases and associated deaths and maximize vaccination rates among all eligible population groups.”

At his press conference the next day, Gov. Scott was asked by WCAX reporter Calvin Cutler about the resolution. Scott replied:

Gov. Scott was not the only curious person. Vermont Daily Chronicle wondered, too, given that previously ‘unthinkable’ government coercion is happening right now in other western-style democracies:

Forced Relocation in Australia. The Australian army has forcibly transported large numbers of residents of Binjari, a mostly-aboriginal town in Northern Australia to the Howard Springs quarantine camp. You can read all the details in a cheery Facebook report by a government official.

Residents of the town of Catherine also are being sent there. Built as housing for miners, Howard Springs was taken over by the government to quarantine Australians returning from overseas. Now it’s a forced relocation camp. Voluntary departure is prohibited . Australian media recently reported on the police manhunt of four “escapees” from Howard Springs. It is a prison. Or rather, an internment camp not unlike the camps to which Japanese Americans were sent during WWII.

Federal, regional and local governments have imposed strict quarantine and travel measures. The total death toll for the entire pandemic in Australia is 2006, according to a recent statementfrom Prime Minister Scott Morrison.

Compulsory ‘shielding’ (forced quarantine) on a community level is the subject of at least one CDC planning document, dated July 26 2020. It is not known whether the U.S. government has developed this concept further.

With these troubling developments in mind, Vermont Daily Chronicle emailed Balint and Krowinski, outlining some of the Montpelier and international backstory covered above, and asked:

Yesterday, Krowinski’s Chief of Staff Connor Kennedy responded: “In our outreach to the Governor on stronger COVID response, we have at no time discussed or proposed the idea of forced relocation for quarantine, nor is this topic on the table for legislative action in January. We have encouraged and discussed data-driven public health measures such as increased masking, testing, social distancing, and encouraging Vermonters to get vaccinated.”

So they haven’t discussed it with the governor. It’s not on the Legislature’s table for January.

Some might say this is a NothingBurger story, along the lines of “Furnace fails to explode, mother and child unhurt!.”

On the other hand, if the Brisbane Times had asked this question a year ago, it too likely would have been laughed off. Now they’re publishing stories about escapees from Howard Springs. What would have seemed alarmist then is now just fodder for the police blotter.

The cops caught three of the escapees, by the way. The BBC reports they all had tested negative for Covid the day before.

18 thoughts on “How far would the Vermont Legislature go to stop Covid-19?”