By Abigail Slagle | The Daily Signal

Americans cite health care as a major concern, if not their most important one. Health care ranked as the most important issue in last year’s midterm elections, for instance, and consistently polls as the top concern in the nation.

All of the Democratic candidates for president say they favor even greater expansion of federal government control over Americans’ health care.

But the strongest energy and enthusiasm is found among those supporting “Medicare for All” legislation, a prescription for total government control over our health care.

In light of these developments, The Heritage Foundation recently hosted a distinguished panel of national experts and policy specialists, including Seema Verma, administrator of the Medicare program; Sen. Mike Braun, R-Ind.; Sally Pipes, president of the Pacific Research Institute; Merrill Matthews, resident scholar at the Institute for Policy In 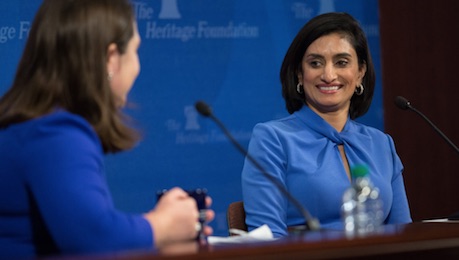 While all of the panelists offered their own perspectives about the state of American health care, they outlined various reasons why “Medicare for All” would not be good for ordinary Americans.

Based on the well-documented experience of “single-payer” health care in other countries, such a system compromises, sometimes drastically, patient access to care.

Medicare for All is oxymoronic. The reason: The government promises free, quality health care for everyone, but the unlimited demand for free care results in reduced access for many. Patients suffer longer wait times, rationed care, and often lower quality care.

For patients, wait times to see doctors would almost certainly increase. While Americans already face a serious doctor shortage, we should expect that more doctors will choose to drop out of medical practice because of the federal government’s sharply lower payment rates.

Panelists Matthews and Pipes, for example, provided a glimpse of what government-rationed care looks like, showing Canadian and British news headlines about patient wait times, and how health care decisions can quickly become political ones.

In a politically organized and run system such as Medicare for All, there would be no guarantee that access to care will be equal. Higher quality medical care is offered in areas with more political clout.

Some liberals in Congress praise Canada as the right model for Americans’ health care. But as Pipes noted during the panel, the quality of care in Canada has diminished to the point where some appointments are limited to 15 minutes. And if you have multiple health issues, you must schedule multiple appointments.

To boot, wait times for procedures are notoriously long in Canada, with an average of about five months, or 19.8 weeks, from the time of a referral from general practitioner to see a specialist. For all of our systemic imperfections, American patients wait an average of just 20 days to see a doctor.

Most of the panelists emphasized that many medical professionals today are working under tremendous pressure. While doctors would initially absorb the brunt of the negative effects of Medicare for All, patients would be worse off as well.

Verma, administrator of the Centers for Medicare and Medicaid Services in the Trump administration, explained that under the Medicare for All legislation, the federal government would pay doctors at rates much lower than current private sector rates.

By imposing Medicare payment rates, for example, on the health care delivered to all 327 million Americans, some analysts project the government would produce a 40 percent reduction in provider payment rates.

Under such severe financial pressure, many doctors would be unable to recover their costs, and some would likely shut their doors. Worse, it would be likely that many students would choose not to go into medicine in the first place.

Verma pointed out that, historically, the medical field “has attracted the best and the brightest in our country.” The career risks, the new bureaucratic burdens and the guarantee of lower income prescribed in the leading Medicare for All bills would likely discourage some of the “best and brightest” from pursuing a career in medicine.

Today, health care accounts for nearly one-fifth of the American economy.  Turner cited the Congressional Budget Office’s analysis that implementing Medicare for All would be a “major undertaking, complicated, challenging, and potentially disruptive.”

Implementing Medicare for All is estimated by liberal and conservative analysts to exceed $32 trillion over 10 years, or an average of $3.2 trillion per year.  As Braun noted, that would require the equivalent of today’s total annual revenue to the federal government.

Medicare for All, centralizing power in the hands of politicians and bureaucrats, closes off all competing options or alternatives. It would fail to deliver a health care system responsive to personal needs and friendly to advances in medical technology, while fostering rapid innovation in care delivery.

However, the Health Care Choice Proposal, developed by a wide range of conservative policy analysts, would accomplish those goals and more.

Americans can increase access to care, improve the quality of that care, and lower costs, without closing off care alternatives or subjecting themselves to the unprecedented levels of taxation.

3 thoughts on “How America’s decision on health care will affect doctors, patients and taxpayers”