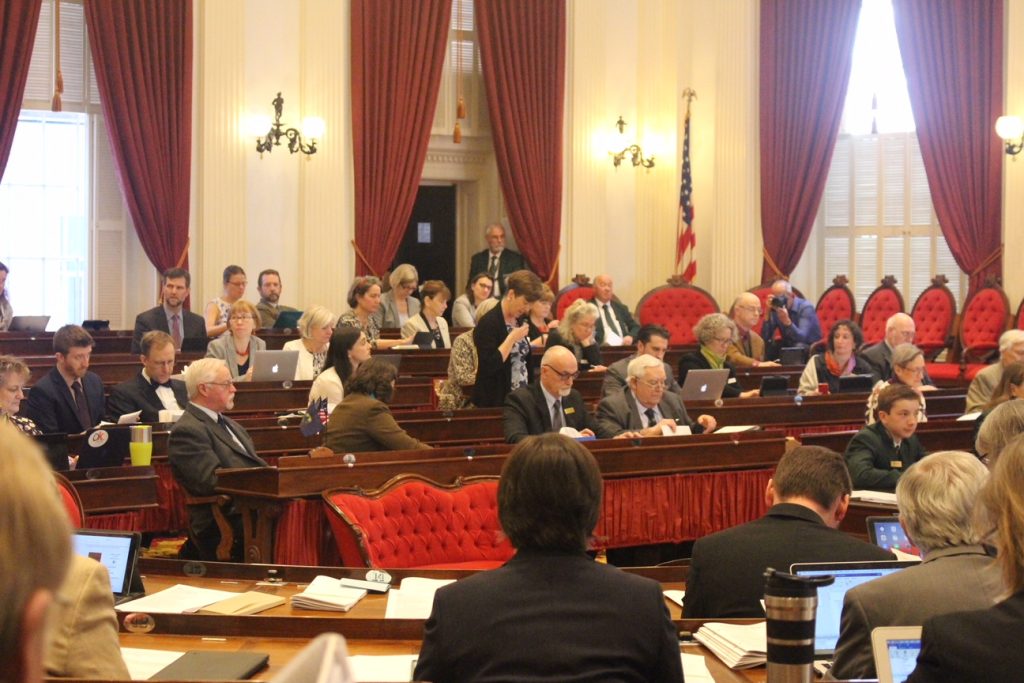 PUSHING FOR A MANDATE: Rep. Lori Houghton, D-Essex Junction, argued that health insurance should only come from the state’s exchange and that people who don’t carry insurance should have to pay a fine.

MONTPELIER — On Thursday the House chamber voted in favor of H.524, the health insurance mandate, which in its current form does not have a financial penalty for not having insurance.

The chamber then spent much time going over an amendment which would allow small companies to form Association Healthcare Plans for their employers to compete with the Vermont Health Connect insurance system and its two big providers, MVP and Blue Cross Blue Shield. Vermont’s two main AHPs are set up through the chambers of commerce and through the Business Resource Services.

The chamber ultimately voted against an amendment put forth by Rep. Jim Harrison, R-North Chittenden. Had it passed, it would have allowed the two AHPs with their roughly 5,000 Vermont members to continue for an extra year. During that year, a study mandated by last year’s H.524 would examine if these AHPs have a negative impact on the state’s system.

Opponents argued that the AHPs will draw people out of the state system, ultimately causing premiums to rise.

“Association Health Plans are essentially a vehicle for some small businesses to escape this merged market,” said Rep. Lori Houghton, D-Essex Junction, speaking for the House Health Care Committee. “The House Health Care Committee wrangled with this issue for weeks, taking extensive testimony about the associations and their impacts. What we’ve found is that the associations’ market has driven up costs on the [state] exchange to the tune of about 2 percent on premiums.”

Meanwhile Harrison and other supporters — mostly Republicans — argued that small businesses are struggling as it is to compete in Vermont and the AHPs give them an affordable alternative to the state exchange. Harrison shared some examples of businesses using AHPs.

“A restaurant with six employees on the plan reduced their employee’s deductible by $3,600 per person [per year],” he said. “That’s huge. And a solar panel installer with 20 employees on the plan with the employer paying 100 percent of the premium, they saved over $14,000 this year switching to the association plan under the chamber [Chamber of Commerce]. … The list goes on, Madame Speaker.”

Ultimately the chamber voted against the measure, meaning AHPs will not be allowed to exist in Vermont if the bill passes in current form.

Rep. Kenneth Goslant, R-Northfield, left the House chamber early for a breather. He told True North that as a business owner, he was too upset to remain in the chamber.

“My big fear is that they keep making it harder and harder for small businesses to exist here in Vermont,” he said before heading back in.

Before the vote on the overall bill, Rep. George Till, D-Jericho, explained why he and the majority of the Ways and Means Committee voted the day before to remove the financial penalty from H.524 for not having health insurance. He said one reason his committee couldn’t get behind it is because of timing, getting to their committee too late in the session.

“We got this bill really one day before the money committee crossover date, and to say it plainly there is a complicated tax penalty formula,” he said. “We did not have time to take testimony from all the people who would have wanted to testify. In particular, those of us on the committee got a lot of emails from healthcare sharing ministries.”

These sharing ministries are not unlike the AHPs in that they are smaller groups of people getting together, pooling resources together and essentially acting as their own health insurance without all the big bureaucracy and high costs that come with the state exchange.

The ministries are not counted as adequate insurance according to this bill;  lawmakers determined they do not meet the minimum requirements for services covered. But since there is no financial penalty for not having adequate insurance, members of these ministries can continue to operate in Vermont with no consequence.

The committee also determined that the administrative costs of the penalty were not economical especially in relation to the money it is intended to collect. He said they determined that it could cost anywhere from $.5 to $4.5 million to set up and another $200,000 per year to maintain, compared with about $1.2 million anticipated to be collected per year.

He did say that it will maintain the requirement for those who opt out of health insurance to mark on their tax forms that they don’t have the insurance and that data will be collected in part for outreach efforts so that these people can be reminded about what offers there are regarding services and subsidies from the state exchange.