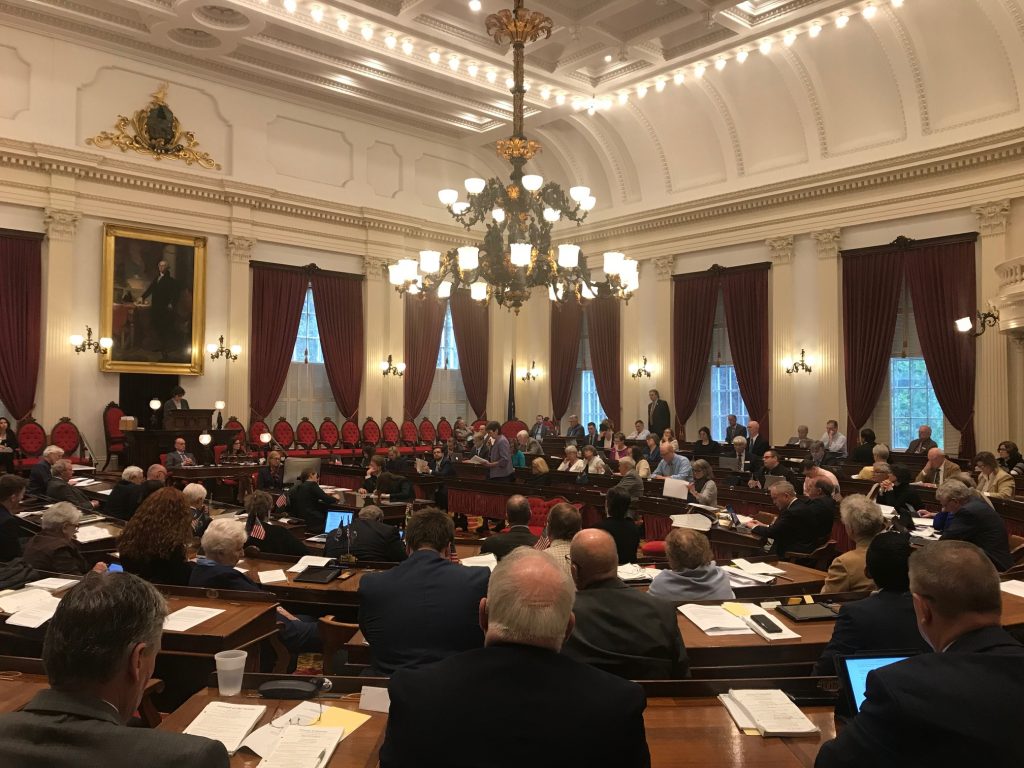 ALL-ACCESS ABORTION: The House Chamber on Tuesday voted in favor of allowing access to abortion up to the moment of birth.

MONTPELIER — The Vermont House of Representatives on Tuesday voted 106-38 for a constitutional amendment that would give Vermonters a fundamental right to kill a fetus at any stage of pregnancy up until the moment of birth, unless infringement of that right is “justified by a compelling State interest.”

Earlier in the session, the Senate voted 28-2 in favor of Proposal 5. The amendment must pass both chambers again in 2022, and then go before voters in November of that year.

Speaker of the House Mitzi Johnson, D-South Hero, was quick to post about the event on social media.

In this time of national uncertainty, it is fundamental that we protect the right to personal reproductive liberty in the Vermont Constitution. #vtpoli pic.twitter.com/sqbzDwz5qE

Ann Pugh, D-South Burlington and chair of the House Committee on Human Services, introduced the bill.

“We have long recognized that the decisions related to reproductive health care and abortion are deeply personal, private, and are best left to a woman and her doctor,” she said. “If Vermonters affirm these values by voting yes, Proposition 5 will place those values in the Vermont Constitution.”

She also talked about the status of abortion at the national level.

“While the right to reproductive autonomy, and particularly abortion care, remains for the time being a fundamental right at the national level, it has been, and is, under serious attack. In this turbulent time, clarity is called for,” she said.

If voters in Vermont approve Proposal 5 in 2022, the following language would be added to the Vermont Constitution: “That an individual’s right to personal reproductive autonomy is central to the liberty and dignity to determine one’s own life course and shall not be denied or infringed unless justified by a compelling state interest achieved by the least restrictive means.”

“This is a pretty powerful thing to open up the constitution,” she said. “I was a town clerk for 26 year and I remember once having a proposition come up to a vote by the people. To have two or three in one session is a really big deal.”

She also said the scenario is different than if H.57, a different abortion bill, becomes law.

“H.57 is a bill that can be amended or changed down the road,” she said. “But if this passes it’s going to be very difficult to undo a constitutional amendment.”

Rep. Vicki Strong, R-Albany, in a meeting of the Republican caucus, said Vermont is taking abortion rights to an excessive level.

“I just want to make sure you are all aware that this is making news all across the country,” she said. “We are going to this extreme, and I’ve heard from alumni from my college from 40 years ago, who are hearing about this in Texas, and emailing me saying to stand strong for life.”

Rep. Mark Higley, R-Lowell, noted that Vermont is moving counter to most other states on the issue of abortion.

“One of the things that I’ve been trying to wrap my head around recently is, there are 41 other states that have tried to pass abortion restrictions this year alone. … Are we wrong or are they wrong?” he said. “We are at such odds in regards to this that I just can’t imagine that they are all wrong, and I know for a fact that we do so much on the other extreme. Maybe there’s a middle-ground, but it’s definitely not in Proposal 5 and it’s not in this wording.”

Rep. Cynthia Browning, D-Arlington, noted that were this language to become an official part of the Vermont Constitution, it’s going to put every pro-life lawmaker in an impossible predicament when it comes to swearing to uphold the constitution.

“I’m incredulous that we would be adding a constitutional amendment to protect the rights of abortion with no consideration for Vermonters who cannot support that position and who need to be able to take a voters oath to uphold the constitution, which would now include something that they cannot support,” she said.

“I’m incredulous that this issue never arose in the committee; it never occurred to someone, or if it did it was not something to be investigated,” she said.

Rep. Anne Donahue, R-Northfield, reminded that the writers of the Vermont Constitution wrote that rights begin at birth during a time when little was known about the development of the fetus in the womb.

She also cautioned that the concept of “reproductive autonomy” could be reinterpreted in unintended ways by future generations.

“Although it’s presented as meaning contraception, sterilization and abortion, in fact, that’s not what it says,” she said. “It’s a much broader term, it’s a term far more open to interpretation and, in fact, could mean a great many things that we don’t currently envision.”

Donahue said it could, for example, be interpreted as the right of men to not be forced into parenthood.

While Pugh suggested that’s not what the language means, Rep. Heidi Scheuermann, R-Stowe, said it could be an issue.

“I’m seriously trying to find out whether we are going to be putting at risk reproductive rights as a result of this, and if we are putting at risk children who should be supported by their fathers,” Scheuermann said.

CLARIFICATION: This story was updated at 3:48 p.m. May 8 to clarify that Proposal 5 preserves the state’s authority to potentially restrict “an individual’s right to personal reproductive autonomy” if such a restriction can be “justified by a compelling state interest.” As Sen. Joe Benning, R-Caledonia, writes in a comment: “Vermont has always been authorized to enact legislation protecting a viable fetus, although it has never had the votes to do so. That authorization argument would still be available with Prop 5.”