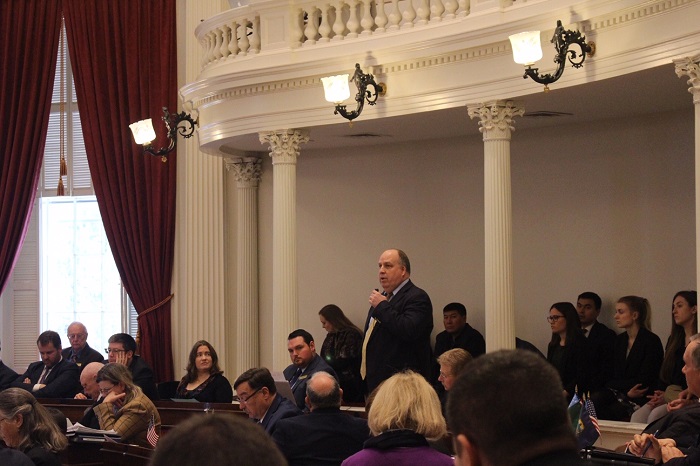 MONTPELIER — The Vermont House voted Friday to raise the state’s minimum wage to $12.55 within two years, but the measure failed to garner enough votes to override a veto, should Gov. Phil Scott oppose the bill in the coming weeks.

Vermont has the 11th highest minimum wage in the nation, and not all legislators were on board with the measure. The bill now moves on to the Senate for consideration.

Rep. Marianna Gamache, R-Swanton, shared her experience as a business owner in explaining her opposition to the bill.

“I am also a small business owner, so I know about the levels of all the expenses that have to do with employees,” she said. “It can be very devastating, and it’s a sad commentary that our small businesses that employ people who would have no other means of an income were it not for those small businesses, that many of those owners don’t take a salary or they take a pinch of a salary in order to make payroll.”

Rep. Brian Cina, P-Burlington, was strongly in favor of the measure.

“Until we change from having an economy that’s an extraction economy, an economy that’s been built on the backs of working people and slaves to benefit the few and not the many, [and] until we address those root issues, it will continue, and we really do need to work towards an economy that’s regenerative and that takes care of people,” he said.

Rep. Cynthia Browning, D-Arlington, who just 24 hours earlier was explaining to the House floor why she thought the economic stresses on the state were too great to justify adding a $29 million paid leave program, made similar comments on raising the minimum wage.

“I think by raising the minimum wage by this amount at this time without protection against a recession, without other modifications, I think we are making it harder for businesses to work in Vermont,” she said.

Rep. William Notte, D-Rutland, said last year he was against voting for the minimum wage bill but this year he’ll support it.

“I work and manage a store in our downtown, and I had real concerns that the bill before us last year would potentially damage my local economy. It went too far without safeguards, it was going to be too challenging a jump,” he said.  “This bill, like most good bills, it really is a compromise bill. I look at this and it’s two years of increases and then we can reassess. We have time to look at the reality on the ground and see the benefits and see if there were any negatives.”

Rep. James Harrison, R-Chittenden, suggested that this bill is even more ambitious than the one last year.

Rep. Scott Beck, R-St. Johnsbury, says businesses are going to have to cut from elsewhere to pay for a higher minimum wage.

Rep. Rebecca White, D-Hartford, said she is a business owner and doesn’t think it will have many negative impacts.

“It concerned me when I listened to fear-tactics being spread that all those great small businesses would either have to shut their doors or they would have to move to West Lebanon, New Hampshire, just go across the river.

“So I did my homework and I did my research to see if that was a truthful statement and in fact, it was almost the complete opposite. White River Junction and Vermont raising the minimum wage, we’ve actually seen it have a positive impact on New Hampshire employees because those employees have seen a raised wage in response to the wages that we have.”

5 thoughts on “House passes minimum wage hike to $12.55 per hour, on to Senate next”