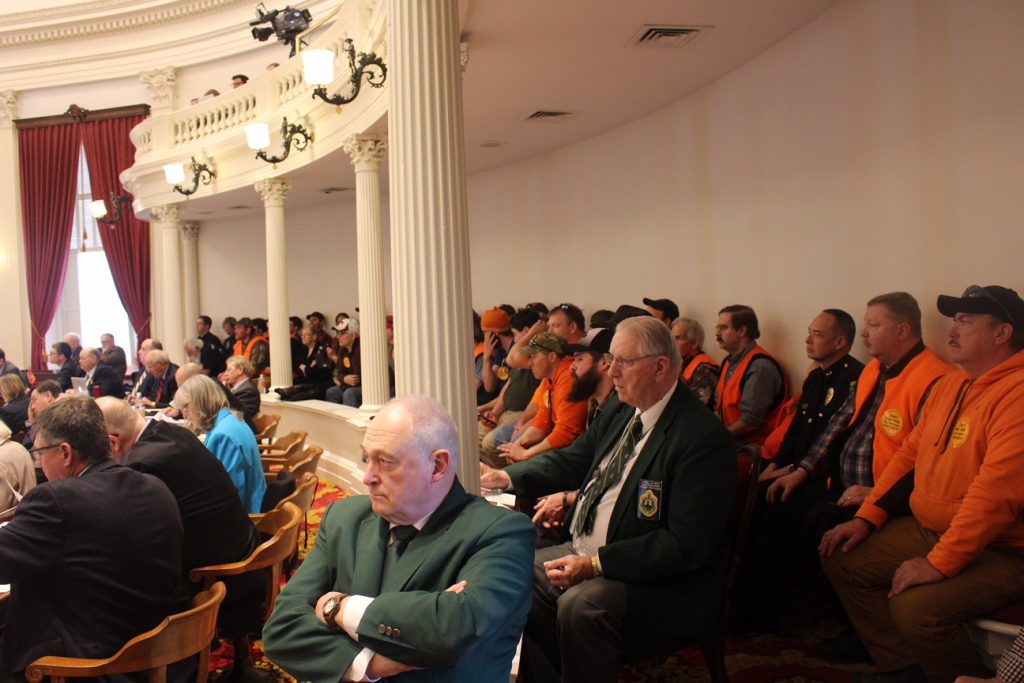 VOTERS WATCHING YOU: Second Amendment supporters in orange lined every public seat in the House chamber (and even all Senate seats) Tuesday afternoon as lawmakers rolled the dice and bet on gun control for Vermont in the form of S.55.

MONTPELIER, Vt. — The little bill that began as a measure for confiscated firearms storage has morphed into an all-encompassing gun control regulation, with the latest changes coming Tuesday as House members voted 89-54 to approve S.55 and send it back to the Senate.

The afternoon session extended well into the evening, and included a sea of orange-vested gun rights supporters filling the House chamber and watching intently as Democrat and Progressive lawmakers voted to remove their constitutional freedoms.

The core components of the approved bill, which haven’t changed much since its preliminary passage by the House on Friday, include expansion of background checks to private sales, a ban on bump stocks, a ban magazines holding more than 10 rounds of ammunition, and increasing the gun purchase age to 21.

Two of these components, the magazine limit and bump stocks, were not in the Senate version when it originally came to the House. Senators must either concur with the House’s bill as-is or form a conference of committee with select members of both chambers to work out the differences.

Several the amendments offered Tuesday addressed the impact new magazine size restrictions would have on gun retailers and shooting competitions. Federal Firearms License dealers have expressed concern that they’ve invested in inventory that could soon be banned. An amendment that would have compensated stores for unsold inventory failed to pass.

Lawmakers did pass an amendment to create a school safety advisory group to draft guidelines to prevent future mass shootings. The group would be comprised of leadership from both the education and public safety sectors.

Another amendment that passed would allow gun manufacturers in Vermont to continue to produce higher capacity magazines to be sold outside the state. The irony of this wasn’t lost on Rep. Brian Cina, P-Burlington.

“So, this amendment creates a situation where a product that is illegal in our state is being made here and sent elsewhere for profit?” he asked. “Are there any other products that we make in Vermont that are illegal here that we sell somewhere else?”

Lawmakers and audience members grew frustrated with the many new proposals offered at the 11th hour.

“The committee itself that proposed the bill is amending their own amendments on the [House] floor,” Rep. Vicki Strong, R-Albany, told True North. “I’ve never seen that in the eight years that I’ve been there. They are making it up as they go. That’s not right for my constituents or the citizens of Vermont.”

Earlier that morning, Vermont Law Enforcement Against Gun Control, a gun rights group comprised of off-duty law enforcement, held a news conference at the Statehouse and criticized S.55 and other gun restrictions as ineffective and unenforceable.

“I took an oath more than 15 years ago to serve the people of this great state and protect your rights, and that’s why I’m here today,” Hardwick Police Chief Aaron Cochran said.

“She had the courage to stand up amongst her compatriots and say, ‘Something is not right here, and I want to make sure something bad doesn’t happen.’ Why are we not promoting programs to help kids like her actually make a difference in what we are facing?” Benning said at the presser.

“The point on all of the gun control amendments is that they are unenforceable and ineffective,” Hughes said. “Like with the magazine ban, there’s no way to tell when a magazine was manufactured — they are not dated and they don’t have serial numbers.”

The push for gun control has big implications for Vermont, which has bipartisan support for gun freedom and ownership. On Twitter, one observer suggested that Democrat lawmakers will lose their jobs in November due to a lack of support from gun-owning moderates in their own party:

There's lots of democrats out there that are pro second ammendment, not all democrats are leftists, which means that there will be lots of pro gun control politicians that will lose next elections. #Midterms2018 #SecondAmendment #vtpoli That's why @GovPhilScott won Vermont.