H.688 passed by a 102-45 vote, setting up a slight veto-proof majority should Gov. Phil Scott veto the bill. The Legislature can override a governor’s veto with a two-thirds majority vote.

Last month, Scott made a series of demands that the bill would need to meet to gain his approval. In an Aug. 12 letter to House and Senate leaders, the governor urged that the new 23-member climate council established in H.688 should have all members appointed through the executive branch to avoid a constitutional conflict over separation of powers.

Scott also took issue with the bill’s provision allowing lawsuits against the state for failure to meet carbon emission reduction targets. He also wants any initiatives created by the new council to be voted on by the full Legislature. 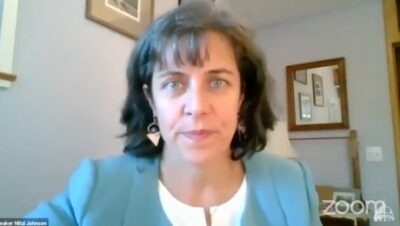 The Senate rejected similar proposals from the governor in May. House members did not mention the governor’s requests during Wednesday’s virtual House floor session.

“I do not take lightly the responsibility of representing our citizenry and I am opposed to giving away my authority to draft a plan, write policies, and roll out a plan that will get us to our carbon emission goals,” she said.

McCoy is referring to the climate council’s authority to create energy plans, as described in H.688. The bill calls for council members to be comprised of state government officials, Vermonters from various economic sectors, and citizen experts. The Agency of Natural Resources would carry out the council’s plans.

Rep. Jim Harrison, R-Chittenden, said the bill is out of touch with the current economy and COVID-19 concerns.

“There are parts of our economy that are in shambles right now,” Harrison said. “We have thousands unemployed, we have businesses that have closed, and others that are hanging on by a thread. And directly related, our state revenues are down and expected to be even further reduced next year.”

Rep. Anne Donahue, R-Northfield, also said the timing of the GWSA is bad, even though she supports parts of it.

“I vote yes in my heart for this bill,” she said. “But I vote no on moving this bill forward irresponsibly during our current pandemic and during an emergency extension of our legislative session.”

“Madam Speaker we must do this,” she said. “It is difficult, change of this magnitude is scary, but Vermonters are counting on us. We know this is coming, we have an obligation to act, we cannot wait.”

“It is our responsibility as lawmakers to protect Vermonters and be proactive especially when it is hard, and we must have the courage to do more than one hard thing at a time,” she said. “Supporting the Global Warming Solutions Act is supporting economic resilience and protecting the most vulnerable from the devastating impacts of climate change.”