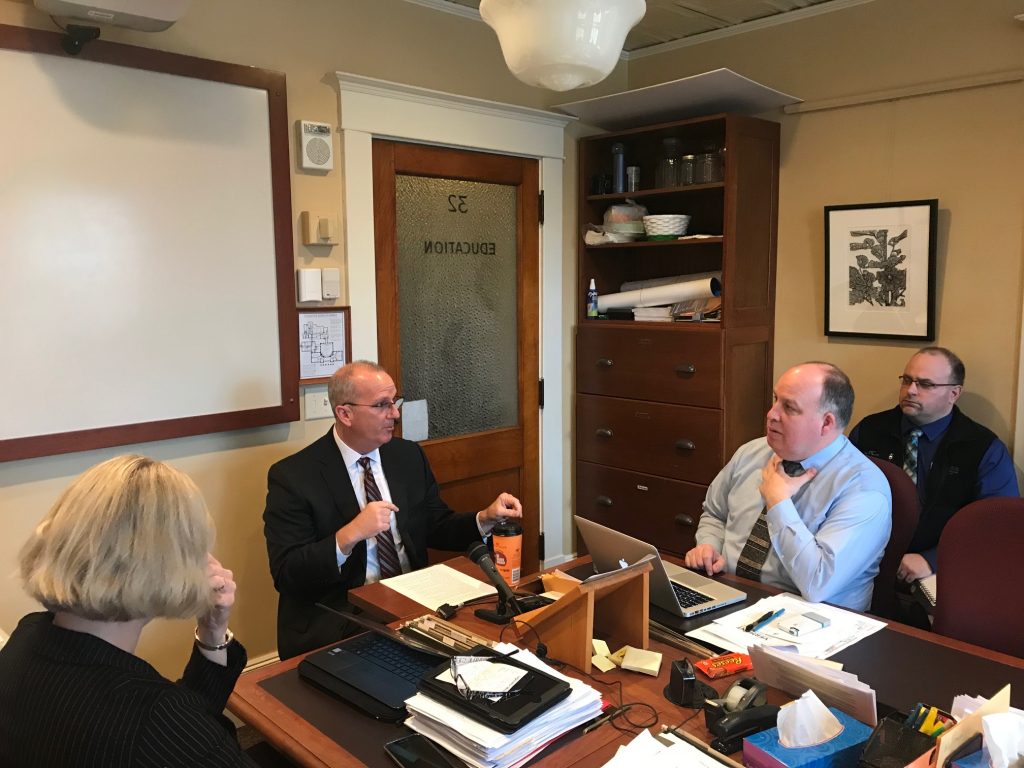 SCHOOL CAMPUS PROTECTION: Robert Evans, manager of Organizational Assessment and K-12 Services for Margolis Healy, spoke to the House Education Committee on Wednesday about actions schools can take to protect against mass shootings.

MONTPELIER, Vt. — If the school safety measures discussed Wednesday in the House Education Committee are any indication, there will likely be no immediate armed resistance to protect children if an active shooter steps onto a school campus in Vermont.

Robert Evans, manager of Organizational Assessment and K-12 Services for the security company Margolis Healy, gave most of the testimony heard by lawmakers.

Among the points discussed, Evans said 95 percent of the state’s private, public and independent schools have been visited by law enforcement since Gov. Phil Scott made a request for school safety assessments following the school shooting in Parkland, Fla., in February. He said most discussions were focused on prevention rather than armed resistance.

“We base where we’re going to spend our dollars and spend our time on probabilities — we look at what’s the most likely thing for folks to experience and what they might be exposed to from a threat,” Evans said. “Is it an active shooter? Is it a violent intruder? I’m going to sit here and tell you that the probability of that is extremely low that that type of event will take place.”

According to Evans, a community forum in Essex this week attended by about 70 parents and first responders dealt largely with how to prevent school shootings.

“None of it was guns, none of it was securing our school,” he said. “It was all about making sure that our kids feel safe, know they are safe, have a principal or superintendent or best friend that they can talk to.”

Rep. Peter Conlon, D-Cornwall, one of the 11 members of the committee, questioned how a community can expect to stop a determined shooter. He referenced the recent shooting plot foiled in Fair Haven, Vt., noting that it was mere good fortune that a New York woman tipped off law enforcement.

“It seems like there wasn’t anything that anybody could do until this young woman from New York said ‘this guy poses a threat,’ and that’s only based on what I read and what I hear, not what goes on behind the scenes,” Conlon said.

He added that no one else appeared to know of the potential threat. In response, Evans reiterated that once the threat was identified, all the right actions were taken.

“In this case, once that information was made known to specific officials, right away certain things got done,” Evans said. “Cops got notified, state police was involved, fusion centers are getting all the social media data mining and very quickly things are happening behind the scenes to make sure that person doesn’t have an access to the school once the threat has been identified.”

As for how to defend against an active shooter, lawmakers spent little time discussing armed resistance, even though Evans listed it as a possibility.

“Does every classroom door have a locking mechanism? Does every school lock the doors throughout the business day? What type of security technology solutions are schools using? Do you have an SRO [an armed school resource officer]? Do you have cell-phone coverage that’s reliable in your area?

“Those are the types of questions that we now will be able to take a look at, have the data about where we are for percentages, and then be able to identify where those future priorities are for where the funding would go.”

Currently, about 30 schools in Vermont have school resource officers. Evans told True North it’s up to local school boards to pursue that security option, and that an SROs can cost between $70,000 and $130,000 per year. He also said if schools want to consider using existing school staff, significant training would be required.

Rep. David Sharpe, D-Bristol, chair of the committee, suggested SROs could have a negative impact on school climate.

“The incidence of minorities being suspended and expelled from school are far greater in schools that had SROs,” Sharpe said.

A similar claim was made Tuesday in the Senate Judiciary Committee, when Deputy Education Secretary Amy Fowler told senators that SROs might result in increased suspensions, expulsions and referrals to the justice system. Neither explained why that would be an undesirable outcome.

“It’s all good in training when you go through the practices and nobody is shooting back, but on game-day that cop has got to make an individual decision to evaluate the situation and ‘go do what I need to do as a human being,’” Evans said.

Evans reiterated his view that prevention is a smart strategy and focus for school security.

“That’s why when I talk about prevention, let’s spend as much time talking about how we prevent these things and making sure that the climates are good in our schools and our kids have a connection. That no kid feels like they don’t have somebody they can trust, somebody they can go to and share information.”