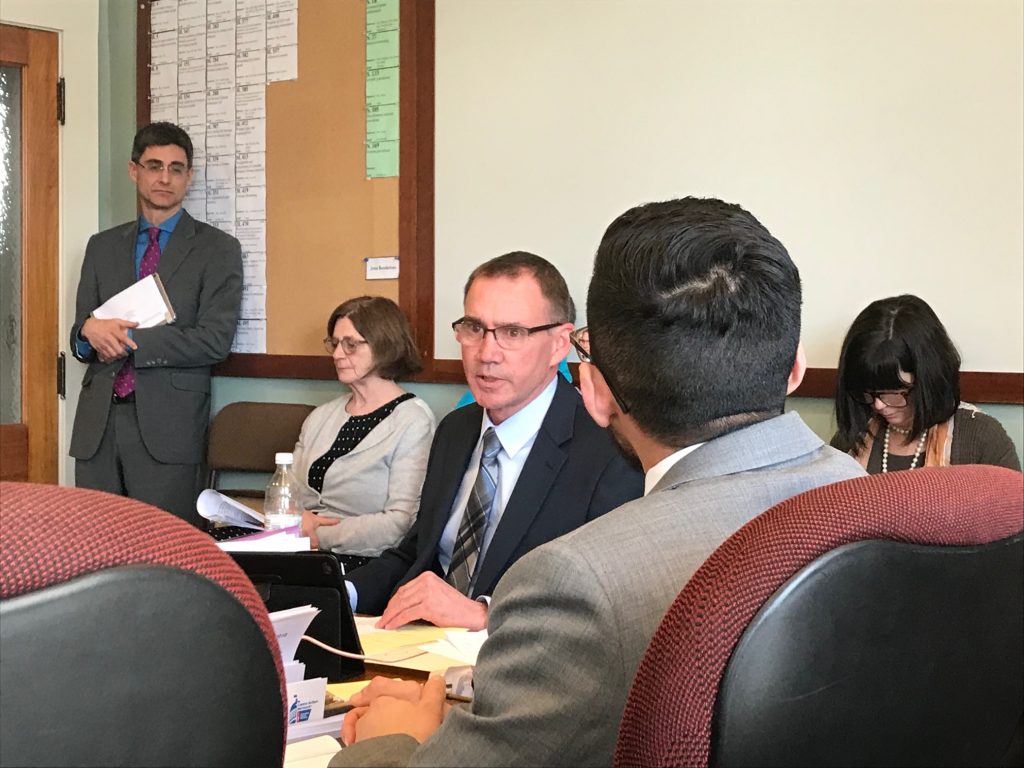 STILL IN GRIEF: Rob Black, the father of gun suicide victim Andrew Black, who shot himself after purchasing a gun Dec. 6, 2018, told the House Judiciary Committee on Wednesday to impose a waiting period for gun purchases.

The House Judiciary Committee on Wednesday heard more testimony on S.169, an act relating to firearms procedures that would impose a 24-hour waiting period on handgun purchases.

The act is a culmination of other Senate bills, including the waiting period and a red-flag provision that allows physicians to determine someone a threat to himself or others for the purpose of removing guns. Another bill in the Legislature seeks to loosen restrictions on standard capacity magazines coming into the state for gun competitions.

The committee heard from Rob Black, the father of Andrew Black, who committed suicide within hours of purchasing a gun Dec. 6, 2018, at his home in Essex. He and his wife, Alyssa Black, had already provided their story to the Senate Judiciary Committee earlier this year. On Wednesday he again urged the committee to impose a waiting period.

He explained that his son had a dramatic reaction to something he saw on social media — a photo of an old girlfriend with a new boyfriend. Earlier this month Alyssa Black described how for days their son presented himself as relatively normal and going about day-to-day activities, even appearing to the gun salesman as in a stable mood just hours before his death.

An examination of the son’s phone, however, revealed he was upset and was conflicted about following through on the suicide.

“He was at home having this text message exchange with the old girlfriend, and if you follow it over the 36 or 40 hours, it went from anger to self-pity to all kinds of different emotions he was having, and he almost had this count-down of when he was wanting to kill himself.”

He noted how his son was in the relationship for about two years.

“They did everything together and their friends were the same friends, and he was losing that at the same time,” he said.

In one of his final text messages to the girlfriend, Andrew Black showed a picture of the gun he used. Just about an hour later his parents came home, and the police were already there.

“He could have made dinner with his mother or watched the hockey game with me, which we did every evening,” Rob Black said. “Just something to snap his mind out of where it was.”

The Blacks have been advocating for the creation of a waiting period up to 72 hours prior to gun purchases. They also support safe storage laws that require guns to be locked away when not in use.

Chris Bradley, president of the Vermont Federation of Sportsman’s Clubs, explained to the committee why gun-rights advocates are against the waiting periods. He reiterated that some lives could inadvertently be put in danger during a waiting period.

He also said passing a law based on such a rare event isn’t good policy. Statistics show, Bradley said, that in the last 20 years only four suicides were committed following a gun purchase.

He cited another statistic that showed guns are seldom used for suicides.

On the potential danger that the waiting period might create, he again noted that the Vermont Judiciary reports 3,380 Relief From Abuse orders in 2018, and said that these are instances where the victims were in real danger.

“These cases represent situations where a victim is able to convince a court that they are under a real threat of bodily injury or even death, such that the court will issue an order to keep the parties separated,” he said.

Bradley also said a waiting period violates Article 16 of the Vermont Constitution, which states “that the people have a right to bear arms for the defense of themselves and the state.”

Finally, he described a waiting period as well-intentioned but ill-conceived.

“No matter how well-intentioned a waiting period may be, no matter what it might possibly save just one life, a limit is being placed on the unalienable right of self-defense, and in doing so there is the inescapable appearance that the powers given to the legislature are being exceeded and ignored — such that it is likely that there will be yet another court challenge,” he told the committee.

“What continues to be missing from the arguments by supporters of the waiting periods is a balanced approach that weighs the access restrictions for potential victims against the asserted suicide prevention benefits,” he said.