Committees in the Vermont House this week will review bills regarding three of the Legislature’s favorite R’s: race, relinquishing firearms, and reduction of carbon. They also will review three-acre runoff, redemption of beverage containers, reorganizing police under one state agency, and raising the standard for police use of force, and new regulations.

The full schedule of all Vermont House and Senate committees, including Zoom links, can be seen here.

1 p.m., House General, Housing and Military Affairs is scheduled to vote on S.14, which would invalidate any deed or covenant restrictions on property development that conflict with state law. 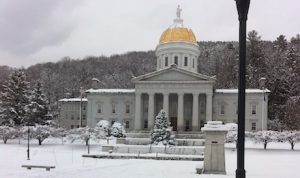 Later that afternoon, House General will discuss J.R.H. 2 – “Joint resolution sincerely apologizing and expressing sorrow and regret to all individual Vermonters and their families and descendants who were harmed as a result of State-sanctioned eugenics policies and practices.” Nancy Gallagher, Author, “Breeding Better Vermonters: The Eugenics Project in the Green Mountain State,” is scheduled to testify.

9 a.m., House Corrections and Institutions will hear state officials discuss the governor’s budget as it relates to compliance with stormwater regulations, including the three-acre runoff rule.

This controversial regulation requires all property owners of three acres or more of impervious surfaces (driveways, parking lots, rooftops, etc.) – including the State of Vermont – to implement expensive phosphorus runoff control systems, or face steep fines. Rutland County compliance alone would cost about $300 million, a DEC official said. A list of every affected parcel is published on the Department of Environmental Conservation website.

Beginning at 10:30 a.m., House Government Operations will discuss creation of the Department of Public Safety, which concentrates much of Vermont police administration, training and policy in one new agency.

9 a.m., Health Care will discuss H.210, addressing disparities and promoting equity in the health care system. Health Commissioner Mark Levine is scheduled to testify. This Democrat and Progressive-sponsored bill would (1) establish the Office of Health Equity; (2) establish the Health Equity Advisory Commission; (3) issue grants for the promotion of health equity; (4) collect data to better understand health disparities in Vermont; and (5) require an additional two hours of continuing medical education on cultural competency in the practice of medicine.

In the afternoon, Human Services will discuss H.171, more funding and training for early childhood education.

House Natural Resources, Fish & Wildlife will spend all day on H.175, to expand the beverage container deposit-redemption system to include water bottles, wine bottles, and containers for all noncarbonated and carbonated drinks, except for milk, rice milk, soy milk, almond milk, hemp seed milk, and dairy products. The bill also would increase the deposit on all beverage containers, except those containing liquor, from five cents to ten cents.

House Corrections and Institutions will learn more about the governor’s plan to sell properties at 9, 13, 14 and 16 Baldwin Street, with proceeds to benefit future capital construction projects. These properties include the Joint Fiscal Office ‘pink lady’ building just west of the State House.

Thursday, 1:30 a.m., the joint Legislature will elect a Sergeant-at-Arms, a National Guard adjutant and inspector general, and trustees of the University of Vermont.

In the morning, House Corrections and Institutions will hear the governor’s plan to build a “Women’s Correctional Facility/ Agency of Human Services Multipurpose Campus Facility.” The State is working with an outside consultant to develop a long-term recommendation for replacement of our aging and outdated correctional facilities. A final report is expected to be completed during the legislative session.

House Judiciary will discuss H.145, raising the standard for law enforcement use of force.