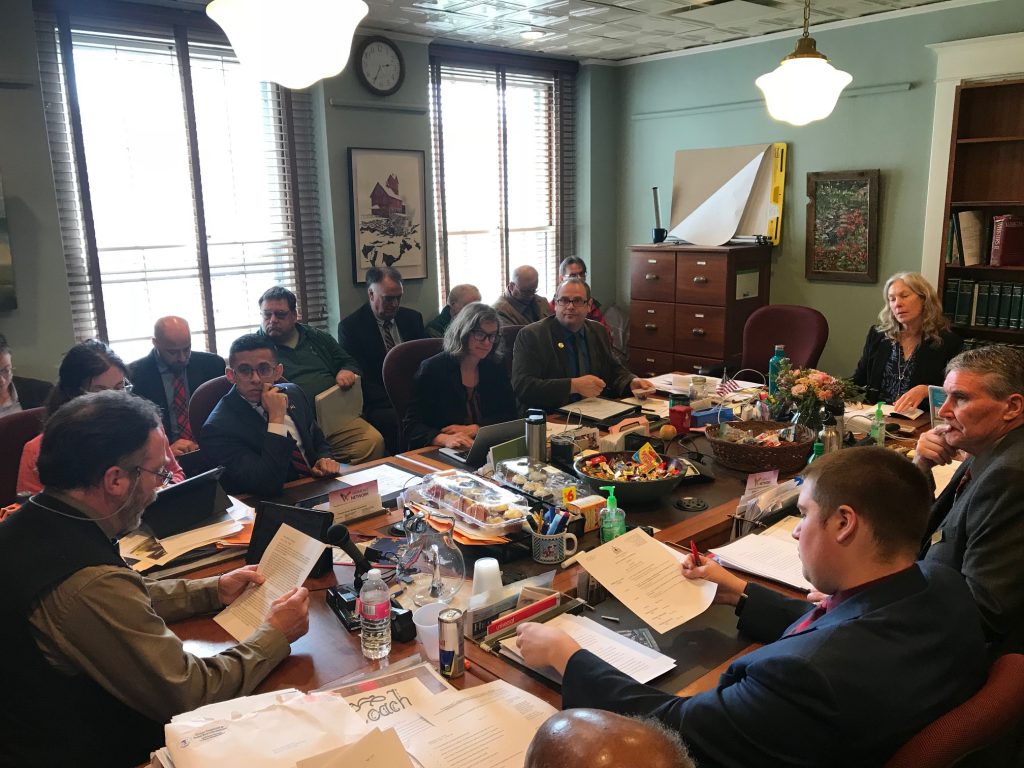 LAST STAND: Bill Moore, firearms policy analyst for the Vermont Traditions Coalition, talks to the House Judiciary Committee one last time before members vote on a gun bill that includes a 24-hour wait period to purchase a gun.

MONTPELIER — The House Judiciary Committee on Monday voted 7-4 to approve new gun legislation that includes a 24-hour wait period to purchase a handgun, among other rules.

Another controversial piece of the bill is it expands last year’s red-flag rule so that any medical professional — not only a psychiatrist — can warn authorities that a person may not be fit to possess guns.

Prior to the vote, Bill Moore, firearms policy analyst for the Vermont Traditions Coalition, urged lawmakers to reject the bill.

“The proof of effectiveness [of the 24-hour wait] is simply not causational in statistically significant data,” he told the committee. “Perhaps rational economics and reductions in adolescent over-prescription of ADHD pills may be just two better ideas to lower suicide rates.”

Furthermore, he noted that women seeking self-defense in domestic violence situations could be put at risk with this bill.

“[That] S.169 contains no exemption for domestic violence victims at the height of their crisis also speaks to the doubts some here in the room have about the restriction,” he said.

Other aspects of the bill, such as enabling the transfer of a standard-capacity magazine to relatives, came from Sen. John Rodgers, D-Essex/Orleans. Another provision S.169 exempts gun competition participants from the magazine capacity limits imposed by lawmakers last year. These were considered compromises by the gun-control advocates.

Committee members discussed the pros and cons of the bill before voting.

“I do think that this is a compromise that benefits public health, safety and also Second Amendment rights,” committee chair Rep. Maxine Grad, D-Moretown, said. “The waiting period from testimony we heard does go a long way to suicide prevention, to the prevention of domestic violence-related homicides, and to gun-related violence.”

Rep. Tom Burditt, R- Rutland, said he won’t support it but he still defended the compromises.

“I don’t think it’s any secret that I’m not thrilled with the bill, but I also realize it could have been a lot different. There could have been many, many more restrictions in this bill. It’s probably, in my view, the best deal that firearms owners can get.”

“I know that this bill is a modest bill and it definitely will make a difference; it has in other states,” she said. “… The people of Burlington have been calling for this.”

“I would love to do something as a legislator that helps prevent suicides in our state, but I really don’t think this bill is it,” he said.

He also expressed concern that gun shows, which draw in lots of tourism, are not going to result in as many gun purchases if these visitors have to stick around for waiting periods.

Rep. Nader Hashim, D-Dummerston, said he will vote for it.

“I think this bill does draw a reasonable boundary regarding waiting periods,” he said.

He said besides suicide prevention, in his experience as a state policeman he said he saw a lot of cases of drugs being traded guns and he hopes this law will inhibit that.

“I know that there’s a statement that criminals will always find a way to procure weapons or any other illicit goods, but I’m quite confident that the gun shops are going to follow the law and any roadblock that I can create for the flow of drugs into the state is something that I’ll support.”

Rep. Patrick Seymour, R-Sutton, told why he won’t support it.

“When I asked questions to try and find out if we had any real tangible data about the time of purchase and time of suicides and the answer was we don’t collect any of that data. I’d love for us to collect that data but without any solid evidence in that way, I couldn’t support this.”

Rep. Kenneth Goslant, R-Northfield, said he won’t vote for it.

“I will be voting no, the data as Patrick mentioned, I just don’t see the need for it. I think we’ve gone far enough with gun regulations at this point,” he said.

After the vote Gun Owners of Vermont president Eddie Cutler spoke to True North. He said Gov. Phil Scott has indicated he will veto this bill.

“He has publicly stated he will veto this bill,” he said. “Hopefully we’ll have enough people say no on the House floor where there will be a veto-proof majority.”

Cutler said this could be a chance to regain some ground for the governor with gun owners.

“If he does veto the bill, we can forgive and forget,” he said. “If that’s any incentive for him.”