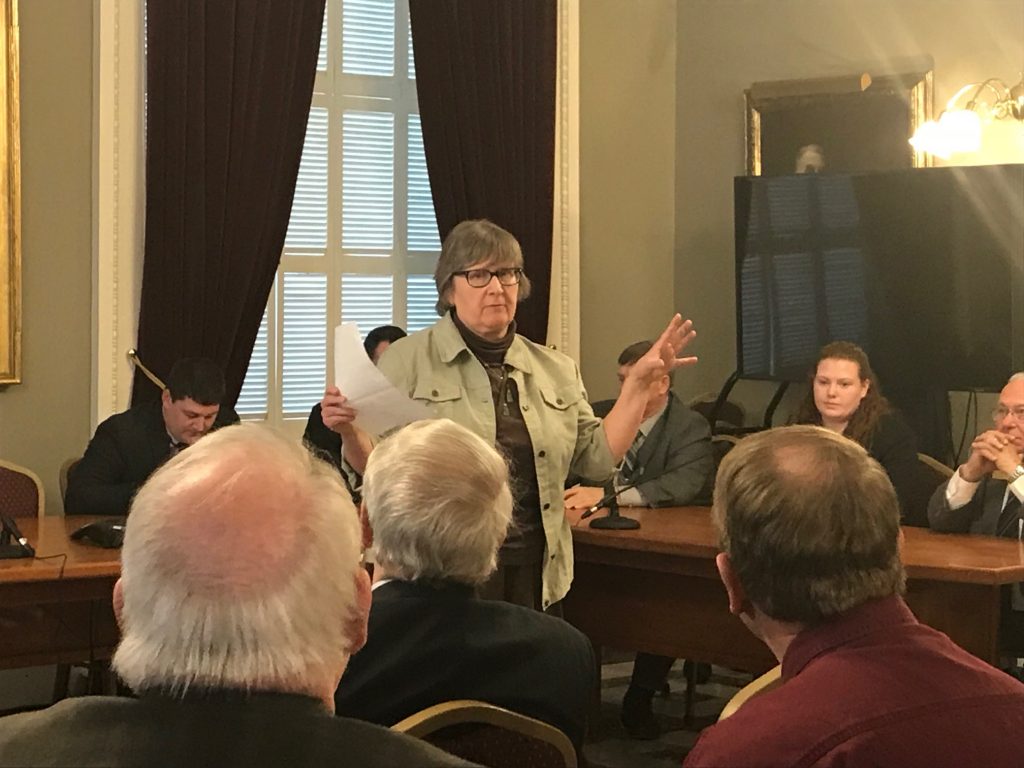 TOO MUCH TAXES: Rep. Cynthia Browning, D-Arlington, tells the GOP caucus why it would be better to allow a paid leave program if participants could opt out.

MONTPELIER — House lawmakers last week passed the universal paid family leave bill by a 92-52 vote, shunning amendments that would have eased the impact on taxpayers and allowed Vermonters who can’t afford the program to opt out.

“We’ve crafted a family medical leave insurance program that is universal, meaning that everyone pays into it for the benefit of all,” Rep. Thomas Stevens, chair of the House Committee on General, Housing, and Military Affairs, said on the House floor Thursday. “We’ll give our small businesses something they praise: a level playing field. It will help them compete in the marketplace.”

But not everyone was impressed. Rep. Cynthia Browning, D-Arlington, told True North that many who pay into the program will never see a benefit.

“They keep calling it a contribution and it’s not a contribution, it’s a tax,” she said. “I think that’s wrong. I think it’s inequitable to force people to pay into something that you know they don’t want. We have a workforce of 325,000 people, and 15,000 people here are gonna take this.”

Browning’s amendment to H.107 would have cut the paid leave period to four weeks, from the current 8-to-12 weeks, and would have allowed individuals to opt out. It was defeated on the House floor Thursday.

“I think it’s important to have this benefit and that’s why I’m providing something that’s cut down,” Browning said ahead of the vote. “There are some people who don’t want this and don’t need this.”

She told her caucus before the vote that teenagers and elderly working 10 or 15 hours per week are an example of a group that will pay into this without ever seeing any benefit.

She also said that she questions the cost estimate for the bill, which is $88 million.

“I’m very concerned about whether this program is financially sustainable,” she said. “It’s all modeling and simulation; they do not know what this is going to cost. … The last thing we need to do in this legislature is to make more promises that we have difficulty fulfilling.”

Her version would have cost $45 million, about half of the program that passed the House.

The House Committee on General, Housing, and Military Affairs gave it’s prior approval of the bill, voting in favor by a 9-1 vote. Stevens argued that the program is a benefit for young families in Vermont.

“This program will help attract more professionals to the state and encourage young people with families to stay in Vermont and level the playing field for small businesses,” he said.

According to Stevens, more than 144,000 Vermont income tax filers made less than a “livable wage” for a two-person household without children. He calculated that as $13.34 per hour and 40 hours per week.

“Making rent and feeding your children and finding childcare while trying to get ahead is exhausting work,” he said. “And if one thing goes wrong, if a child gets sick or a car breaks down or a rent check is missed, the cycle starts again and the programs the state tries so hard to fund and staff to alleviate this cycle get pushed to the limit.”

Rep. Zachariah Ralph, P/D-Hartland, offered an amendment which would have let businesses pick up half the cost for the program, instead of being a payroll tax placed 100 percent on employees.

“It’s a recognition of where the money comes from,” he said to the GOP caucus.

The House voted down his amendment as well.

Representative Scott Beck, R-St. Johnsbury, said he simply could not support the bill.

“I just can’t support raising taxes on Vermonters by $88 million and spending it on this,” he said.