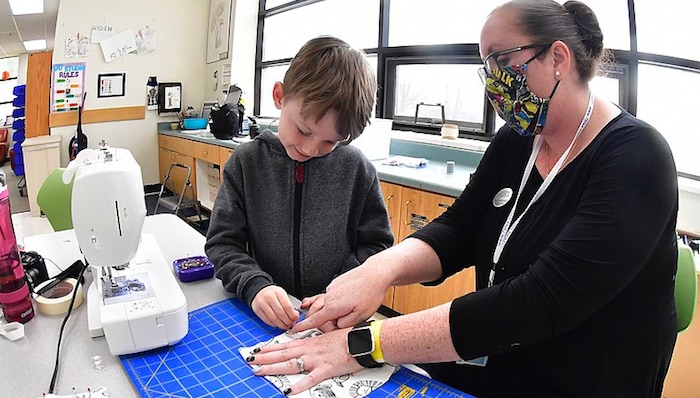 MASK MANIA: School children as young as 3 years of age are being required to wear a mask in school. This may be part of what’s driving a homeschool boom this year.

The new wave of homeschooling applicants is being driven by excessive new COVID protocols such as social distancing and mask requirements, according to some of Vermont’s top homeschooling experts.

Homeschooling is hot. Applications are surging in states across the nation, including in Vermont, where the state is seeing a 75 percent jump in applications compared to last year. The spike, some of which is due to coronavirus restrictions, stands to greatly increase the current 2.5 million K-12 homeschool students in the United States.

“None of these parents are talking about COVID,” said Retta Dunlap, the founder of the Vermont Home Education Network (VHEN). “They are talking about ‘my special-needs child has to see your lips to actually understand what you are saying.'”

Dunlap, a resident of of Woodbury, homeschooled all four of her children before they went on to various colleges. She’s now a point-person for monitoring homeschool-related legislation in Montpelier.

To mitigate the spread of the virus, the Department of Education issued guidelines that include having children as young as 3 years of age wear masks and remain 6 feet apart.

According to Dunlap, the guidelines can be especially difficult for autistic children who need to see a person’s mouth and face expressions to comprehend speech.

“These are the things that parents are talking about, not COVID,” she said. “It’s the settings, the designs. I remember seeing that picture where they had a piece of plastic taped down the room and desks were on either side of it and I thought, oh man, my boys would have holes in that plastic so fast.”

Vermont has received at least 1,634 enrollments as of mid-July. Dunlap said that while the state has already seen a 75% jump in homeschool applications year over year, she believes hundreds of additional families aren’t yet included in the total.

“So there could be [more], I just don’t know. I don’t think the agency has a feel for it, they are swamped,” she said.”

Elizabeth Curran, of Whiting, is another homeschool leader in Vermont. She schooled her eight of her ten children and she helps newcomers embrace homeschooling. She said she received more homeschool inquiries over the past month than she typically gets in an entire year.

“They really disliked the remote schooling that was done in the spring, and found it way more work than they can do,” Curran said. “They felt that anything less than that would be better.”

According to Curran, parents also fear sending their children into school under the “hybrid-method,” and they don’t want their children to wear masks all day. And their kids are falling behind in basic subjects like math and reading.

“That has been a really common thing to hear,” she said. “Teaching to the test has been a major drawback for students excelling in basic functions.”

Back to school protocols differ depending on where you live. In England, children under the age of 11 are discouraged from wearing masks. In China, two children died during gym class in May while wearing masks.

Dunlap said that while many parents think they need permission from the state to do homeschooling, the courts have established such is not the case.

“The state does not interfere in the home with that education,” she said. “It’s only in enrollment time they nitpick your paperwork, but that’s it. They don’t call you, they don’t check up on you, they do nothing. And the schools have no business calling you either. So that’s one thing that parents need to have the confidence that they are educating their children.”

Homeschooling in the United States has continued to climb over the past four decades. According to an ABC News report, the National Home School Association had received over 3,400 requests for information in just a single day last month, compared to about 5-20 inquiries per day during a typical year.