MONTPELIER — Three policy leaders visited the Housing and General Military Affairs Committee on Thursday to testify about a bill that has been dubbed “the homeless bill of rights.”

The aim of H.492 is to prohibit discrimination against people without homes. Supporters insist it won’t prevent private business owners from protecting their space and activities, but at least two of the witnesses who testified expressed some reservations.

Austin Davis, the government affairs manager for the Lake Champlain Regional Chamber of Commerce, asked questions regarding the bill that are likely on the minds of most Chamber members.

“We’re wondering what this proposal would have for interaction with owners of businesses dealing with things such as loitering or behaviors that make it more difficult to operate a business,” Davis said.

Rep. Tom Stevens, D-Waterbury and lead sponsor of H.492, said the measure would allow business owners to retain all current options for dealing with disruptive behavior. 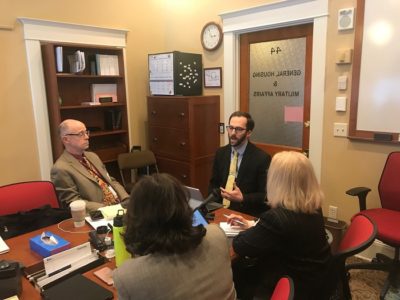 HOMELESS VS. BUSINESS: Austin Davis, the government affairs manager for the Lake Champlain Regional Chamber of Commerce, tells lawmakers he wants to make sure businesses, as well as the homeless, are protected.

“This is about erasing the stigma that comes along with it in providing certain protections. … This legislation is not to excuse behavior in the public sphere,” he said.

Stevens further explained that a store owner should not be able to tell someone to leave solely based on the person being homeless. However, if the objection is for some reason not related to living-status, then the owner can take action.

Rep. Marianna Gamache, R-Swanton, who who is both a lawmaker and a business owner, weighed in.

“My understanding of all these conversations basically was, whatever laws that are on the books that exist now in terms of behavior and that sort of thing would still hold,” she said. “It would be in terms of service, treatment — that’s when this comes into play in terms of just assuring people that it doesn’t matter where you are coming from, the treatment that you get should be the same as anyone.”

Davis then asked what happens if someone who is homeless tries to sleep at an establishment.

“My interpretation is that if it is interrupting the normal course of business [action may be taken] — again it falls to the behavior of the individual. But it doesn’t give carte blanche for homeless people to say, ‘Oh I’m homeless, I can go sleep anywhere I want,'” Stevens answered.

Davis suggested that the goals of this legislation are already covered in parts of the existing law. He also told the committee there are existing efforts to help the homeless.

He gave the example of a pilot program in Brattleboro called Work Today. It’s still gathering grant funding before it’s operational, but this is expected to gain traction this spring.

Karen Horn, director of public policy and advocacy for the Vermont League of Cities and Towns, expressed her concerns about the bill, including its status in regards to Title 1 law.

“We are concerned as was mentioned earlier, why this particular legislation would be put into Title I,” she said. “Title I talks about common law — it talks about the open-meeting law, the public records law, and access to interpreters of persons who are dealing with people who are deaf or hard-of-hearing. It doesn’t actually talk about any of these kinds of issues.”

Horn said she hopes towns will not be prevented from dealing with aggressive panhandling.

“Municipalities do need to maintain the authority to adopt ordinances that address the time, place and manner of soliciting that are content mutual and do not burden people’s abilities to exercise their free speech rights,” she said.

She also said there’s a part of the bill that allows an aggrieved person to take legal action. She cited a section on Page 4 of the bill.

“A person aggrieved by a violation of this section may bring an action in Superior Court for appropriate relief, including injunctive relief and actual damages sustained as a result of the violation, costs, and reasonable attorney’s fees,” it states.

Horn said she would like to know who an aggrieved person is going to sue, and what situations account for a grievance.

“A landlord may lawfully reject a homeless applicant because he or she has a negative rental history or caused damage to an apartment, but homelessness alone should not be a permissible basis to exclude a person from housing,” she said.

Davis said that the ultimate policy objective should be to keep people from becoming homeless in the first place.

“I have to say, I find it kind of sad that we have to defend anyone’s right to sleep outside in front of a business,” he said. “I would hope that we can find the resources to be committed to not having people sleep outside, but I guess that’s a whole other conversation.”

7 thoughts on “Homeless bill of rights under discussion by lawmakers”