Even as President Donald Trump deployed U.S. military units along the U.S.-Mexico border to repel a caravan of South American migrants marching north, pro-illegal-immigration protesters in the Queen City braved the cold and wind downtown to show support for a local lawsuit filed in U.S. Federal District Court. 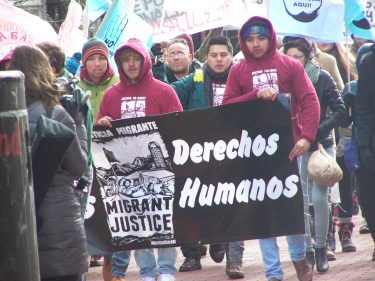 Immigrant and civil rights activists braved the cold and wind Wednesday to show their support for a lawsuit filed at U.S. Federal District Court in downtown Burlington.

According to a news release by ACLU-Vermont, the lawsuit alleges that “the Vermont DMV assisted ICE and DHS in targeting Migrant Justice leaders after the organization worked to pass Vermont’s Driver Privilege Card (DPC) law in 2013, allowing state residents to obtain driving privileges regardless of immigration status.”

The groups say that when undocumented immigrants began applying for driver’s privilege cards, the DMV sent that information on to U.S. Immigration and Customs Enforcement (ICE), which then “compiled dossiers on Migrant Justice leaders, including their social media pages and media appearances.”

They further allege that the Vermont DMV “shared the plaintiffs’ information with ICE for discriminatory purposes, out of racial and anti-immigrant animus.”

Some banners carried by protesters read  “Black Lives Matter” and “No Borders.”

In front of the federal building, protesters gathered for a news conference and rally led by activists from the bed of a Toyota pickup truck. Vermont activist Enrique Balcazar, one of the plaintiffs mentioned in the lawsuit, spoke to the marchers. 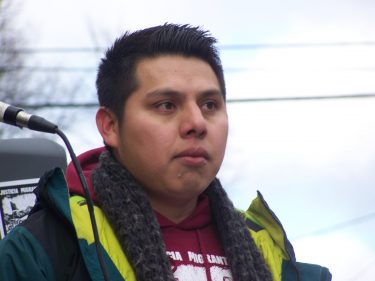 Vermont dairy worker and activist Enrique Balcazar, one of the plaintiffs named in the Migrant Justice lawsuit against ICE and the Vermont DMV.

“We come to the U.S. from countries with histories of political repression and we thought that here our freedom of speech would be protected as we stood up to defend our rights,” he said. “It is clear that ICE is trying to silence immigrant voices in Vermont.”

The 41-page-long federal lawsuit challenges the immigration practices of the U.S. and state of Vermont and alleges profiling along with mistreatment and surveillance of migrant farm workers and activists.

According to the lawsuit, 20 members of the organization Migrant Justice were arrested and subsequently detained by ICE agents.

“ICE has infiltrated Migrant Justice’s private meetings; targeted, surveilled, and engaged in disinformation campaigns to sow distrust among its members; and arrested and/or detained no fewer than 20 active Migrant Justice members,” the lawsuit read.

The lawsuit sets out to thwart ICE’s ability to deport migrant workers. Noted in the complaint is an arrest which took place Sept. 13, 2011, during the Obama administration. Weeks earlier, on Aug. 18, Migrant Justice member Danilo Lopez delivered a petition to the office of then Gov. Peter Shumlin “to publicly ‘say no’ to Secure Communities (an ICE program) because it ‘threatens our security, promotes racial discrimination,’ and lacks transparency.”

The suit outlines the arrest of Lopez on Sept. 13, in which Vermont State Police stopped a car for speeding and found Lopez as a passenger. Although he was not the driver, state police handed Lopez over to U.S. Border Patrol.”

Following the arrest, Migrant Justice staged a protest against for Lopez’s detention. The undocumented immigrant was released after requests were made by U.S. Sens. Patrick Leahy and Bernie Sanders, along with Rep. Peter Welch.

On April 21, 2016, Migrant Justice reported that Garcia Diaz, one of the lawsuit’s plaintiffs, was arrested in Stowe.

Diaz was arrested by ICE agents in the parking lot while attending an entertainment event. The lawsuit identifies an internal ICE report identifying Diaz as a “prominent and public member of the immigrant advocacy group Migrant Justice.”

Migrant Justice’s Will Lambeck, speaking at the news conference and rally on Wednesday, said an informant was placed inside his group in Vermont. 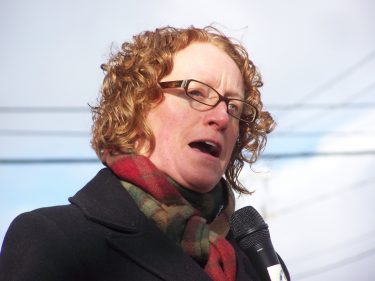 ACLU attorney Lia Ernst: “To be clear, this suppression of free political speech violates bedrock, fundamental constitutional law. … We will not stand for it.”

“That … person was in fact working with ICE and in frequent communication with her handler at ICE regarding Migrant Justice’s activities and its membership,” Lambeck told the audience.

“Beginning in at least 2014, ICE has targeted, surveilled, and spread disinformation about Migrant Justice, its staff, and its leaders,” Lambeck said, echoing the lawsuit text. The arrests apparently did not follow ICE’s rules of enforcement, according to Migrant Justice.

“Th experiences of immigrants in Vermont — including our plaintiffs in this case as well as internal records we’ve received — demonstrates, without a doubt, that the state and federal governments have undertaken to retaliate against outspoken critics and activists in the migrant community. To be clear, this suppression of free political speech violates bedrock, fundamental constitutional law and we will not stand for it,” she said.

Speakers did not specify the past or current immigration status of the plaintiffs. However, Vermont has since passed a law in March 2017 that prohibits state and local officials from helping ICE enforce U.S. immigration laws.