On December 15, YouTube announced that due to ‘medical misinformation’ it would not upload the October 25 Restoring Our Faith Summit panel discussion of medical and scientific experts on the Covid-19 vaccine, including California physician Dr. Aaron Kheriarty. This morning, a December 13 no-holds-barred video interview with Kheriarty was uploaded by Dr. Rob Williams on his poke-the-bear video news website, http://www.vermontindependent.net.

Kheriarty is author of The New Abnormal: The Rise of the Biomedical Security State. Until last December, he was a professor of medicine at University of California – Irvine and a leader of the medical ethics panel at a nearby hospital. Then without consulting the ethics panel, the university instituted a vaccine mandate. 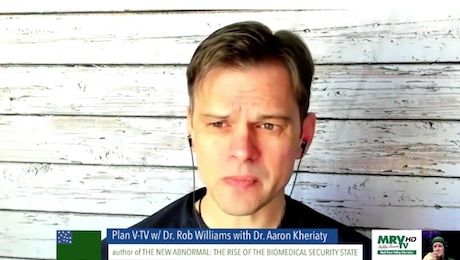 Dr. Aaron Kheriarty, a member of the Restoring Our Faith Summit panel discussion, was banned by YouTube for “medical disinformation.”

“That seemed strange,” Kheriarty said. “Clearly the vaccine mandate was going to be the most ethically fraught of all of the policies the university developed. Informed consent was being tossed overboard, which made no sense given the iffiness of the clinical trials.”

It was the beginning of his personal struggle with the biomedical security state. It ended with him getting fired.

“I began to see fellow colleagues, nurses, staff, students being steamrolled by this policy,” he said. Medical, professional and religious exemptions were almost non-existent. As he prepped for teaching his medical ethics course – including issues like standing up for the patient first, informed consent, integrity – he saw all around him a medical institution flouting all of these principles.

A Wall Street Journal column he wrote outlining his concerns failed to move the medical establishment.

“Long story short, I filed a lawsuit in federal court challenging the vaccine mandates,” Kheriarty said. The University put him on investigated leave, then suspended him. Kheriarty offered many accommodations – working from home, taking a sabbatical – but the university would have none of it. He was fired.

A young husband and father of five, he quickly established a private practice and developed associations with non-profit organizations. A year to the day of being placed on unpaid suspension, he published “The New Abnormal.”

“I said it a year ago, and I’ll say it again because it’s even truer now,” Kheriarty said. “The real division today is no longer left/right, liberal/conservative, or Democrat/Republican. It is between those who will accept a technocratic biosecurity surveillance regime and those who will resist.”

Williams, a teacher of media and the Holocaust (among other subjects) in Vermont colleges, noted that the Nazi eugenics program and the ‘Jewish Final Solution’ entered into German society through its public health programs.