Lawmakers have mandated a variety of COVID restrictions to stem the spread of the pandemic, but not all lawmakers have been willing to follow the rules.

But many political leaders and members of their families have failed to comply with social distancing rules. Here’s a list of lawmakers who appeared to dodge coronavirus-related restrictions.

Democratic Speaker of the House Nancy Pelosi attended a hair appointment in San Francisco Monday, though indoor hair salons in the California city are currently closed due to the coronavirus pandemic, Fox News reported. 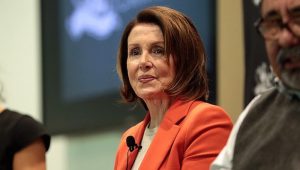 Security footage obtained by Fox News shows a wet-haired Pelosi walking through eSalon in San Francisco on Monday as she attended her appointment for a wash and blow-out. Hair services at the salon range from $85 for a shampoo, haircut, blow dry to $325 for a Brazilian blowout, according to the eSalon website.

The house speaker’s nose and mouth are not covered by a face mask, though a face mask appears to be hanging around her neck, video shows.

San Francisco hair salons have been closed since March and were permitted to open Sept. 1 for outdoor hair appointments only, Fox News reported.

Erica Kious, the owner of the salon, told Fox News Tuesday that a stylist who rents a chair texted her Sunday night and let her know that “Pelosi assistant just messaged me to do her hair.”

“It was a slap in the face that she went in, you know, that she feels that she can just go and get her stuff done while no one else can go in, and I can’t work,” the salon owner said, adding that she “can’t believe” that Pelosi was not wearing a mask.

“We’re supposed to look up to this woman, right?” Kious said, according to Fox News. “It is just disturbing.”

“This business offered for the Speaker to come in on Monday and told her they were allowed by the city to have one customer at a time in the business,” he told KTVU. “The Speaker complied with the rules as presented to her by this establishment.”

A photo posted Sunday shows Democratic Philadelphia, Pennsylvania Mayor Jim Kenney eating without a mask in a restaurant in Maryland, the Philadelphia Inquirer reported. The mayor’s office confirmed that the photo was taken Sunday in the Chesapeake Bay area.

Indoor dining is prohibited in Philadelphia until Sept. 8, according to the Philadelphia Department of Health.

A spokesperson for Kenney’s office told the Daily Caller News Foundation that Kenney visited a restaurant owned by one of his friends in Maryland and stopped on his way back to Philadelphia to eat outdoors at Rouge in Rittenhouse Square.

“Throughout the pandemic, the Mayor has consistently deferred to the guidance of the Health Commissioner, who in this case felt strongly about waiting until Sept. 8 to resume indoor dining,” Deana Gamble told the DCNF. “If elected officials at the federal level had similarly deferred to health experts over the past five months, this might not even be an issue by now.”

Gamble added that Kenney understands “the frustrations of local restaurant owners who have been hardest hit by the pandemic,” but emphasized to the Inquirer that the Maryland County where Kenney dined has only 782 total coronavirus cases while Philadelphia has more than 33,000.

Democratic Chicago Mayor Lori Lightfoot obtained a haircut during a state-wide stay-at-home order in April — a haircut she defended by saying that the stylist wore both a face mask and gloves.

“I’m the public face of this city,” the mayor said, according to NBC News. “I’m on national media and I’m out in the public eye.”

“I think what really people want to talk about is, we’re talking about people dying here,” Lightfoot said when she defended the haircut, NBC reported. “We’re talking about significant health disparities. I think that’s what people care most about.”

Lightfoot’s haircut came after her public service announcement that “getting your roots done is not essential,” according to the Chicago Tribune. Her hair stylist posted a photo of the mayor’s fresh cut on Facebook and said said that she had the “pleasure of giving Mayor Lightfoot a hair trim,” according to NBC.

Democratic Illinois Gov. J.B. Pritzker joined protestors in Chicago to commemorate Juneteenth on June 19. Photographs from the event show Pritzker marching in the midst of the crowds wearing a mask.

Pritzker’s decision to join protestors came though both the state of Illinois and Chicago had entered Phase 3 of the state’s reopening plan. Chicago entered Phase 3 on June 3, and guidance from the City of Chicago mandated that non-business or social gatherings be limited to less than 10 persons, NBC Chicago reported.

Critics blasted the trip as a public relations stunt following Cuomo’s order that coronavirus patients be placed in nursing homes and other long term care facilities. Experts called Cuomo’s order a “fatal error,” and said that this order led to higher levels of death among nursing home residents.

Cuomo’s visit to Georgia took place though Georgia was one of the 22 states on New York’s travel advisory list, the Democrat and Chronicle noted. Travelers from states that are on the list must quarantine for 14 days after they arrive in New York, but Cuomo did not quarantine since he is an “essential” employee and his trip was less than 24 hours, the publication reported.

Do I say – but not for me >> no mask and no #socialdistancing #Cuomo #cuomounmasked #CuomoPrimeTime pic.twitter.com/62sBreqDlz

“Everyone wore masks the entire time except when they spoke at the press conference and these photos were taken three seconds after it ended,” Cuomo senior adviser Rich Azzopardi told The New York Post.

“There is no bigger champion of wearing masks than this governor and it’s ironic that the right wing echo chamber that spent months trying to politicize mask wearing is now trying to seize of this cheap political attack,” Azzopardi added.

Democratic Virginia Gov. Ralph Northam sparked a backlash when he was seen reviewing security at Virginia Beach without a face mask in late May, according to local outlet NBC12.

Photographs of the incident, which occurred as Northam pondered mandating a statewide face mask policy, circulated on social media mocking the Virginia governor for failing to follow his own advice.

JUST IN: Statement from @GovernorVA on not wearing a mask today while in Virginia Beach. “The Governor has repeatedly encouraged wearing face coverings inside or when social distancing is impossible. He was outside today and not expecting to be within six feet of anyone.” @NBC12

Northam’s office said in a statement that Northam was “not expecting to be within six feet of anyone.”

“The Governor has repeatedly encouraged wearing face coverings inside or when social distancing is impossible,” Northam’s office said. “He was outside today and not expecting to be within six feet of anyone.”

“I hear you. I hear what you are saying about the police,” Garcetti told protestors, Fox News reported. Despite his gesture of solidarity, hundreds of protestors gathered that night to demonstrate outside his home.

The move came three days after Garcetti called in the National Guard to deal with the continuing riots and protests occurring throughout the city.

The mayor also imposed a curfew, Fox reported, telling media: “This is no longer a protest. This is destruction. This is vandalism.”

Democratic New York Mayor Bill de Blasio drew fire when he made a last ditch attempt to go to the gym on March 16, the day that Cuomo announced all gyms in the state would shut down to stop the spread of the coronavirus.

“The YMCA has been a huge part of his and his family’s life, like it has been for a lot of New Yorkers,””de Blasio’s office said in a statement about his decision to go to the gym only hours before Cuomo closed gyms in the state. “It’s clear that’s about to change and before that, the mayor wanted to visit a place that keeps him grounded one last time.”

As Governor is announcing gyms, restaurants etc will close as of 8pm, tonight guess who is at the Park Slope Y? Statement here from @NYCMayor spokeswoman: pic.twitter.com/Cxly6g6mxF

13 thoughts on “Here’s a list of Democratic lawmakers who broke COVID rules, starting with Nancy Pelosi”