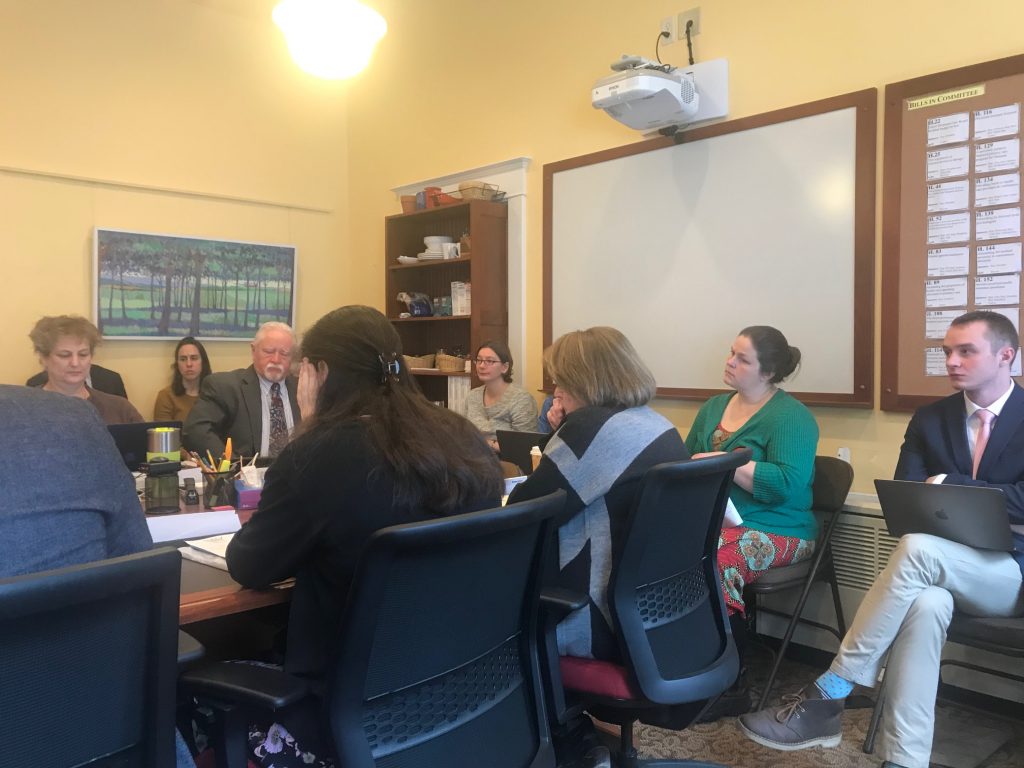 LEANING TOWARDS A PENALTY: The House Health Care Committee listens as Jason Levitis, head of State Health and Value Strategies for Princeton University, explains why Vermonters should face a financial penalty if they don’t purchase health insurance.

MONTPELIER — The House Committee on Health Care appears to be leaning toward imposing a financial penalty on Vermonters who do not purchase health insurance.

Last week during a meeting on health insurance, Jason Levitis, head of State Health and Value Strategies for Princeton University, addressed the committee by phone and advocated for penalizing Vermonters who opt out of purchasing private health insurance.

“A mandate that does not have a penalty behind it is going to be substantially less effective at getting people covered,” he said, referring to a new law in Vermont that requires people to have health insurance but doesn’t yet include a penalty for those who refuse.

The discussion comes as health insurance premiums continue to be too expensive for many.

Vermont health insurance premiums have been ranked the highest in the nation. In 2016 the Kaiser Family Foundation estimated that, before subsidies, Vermonters age 40 an paid average $465 per month for the cheapest plan through Vermont Health Connect — that’s before substantial increases in the years that followed.

For the most part, the question before the committee was not if there will be a penalty, but how much will it be, and who pays. The thought was if too many low-income Vermonters are exempt from the penalty, it defeats the purpose of a mandate altogether.

“It’s only one individual, and I would like to hear from some other experts in the field and see what their advice was, and maybe even some [experts] that perhaps take the view of stay away from the individual mandate,” he said.

“It was one individual and it would be helpful to hear from a couple other people who could offer us another perspective,” she said. ” … I just have so much hesitation about financially penalizing someone who is in a financially difficult situation and can’t afford health insurance.”

Rep. William J. Lippert Jr., D-Hinesburg, the committee chair, indicated that the mandate to have health insurance is a foregone conclusion.

“We’ve had some of that discussion and we concluded that we going to go forward with that mandate,” he said. “I’m just trying to move our process forward, and in some ways, I don’t want to plow around where we’ve already been.”

Members also discussed healthcare sharing ministries and whether their members should qualify for an exemption, since they were exempted from the individual mandate of the Affordable Care Act. The religious-based health-expense sharing programs are affordable alternatives to health insurance policies.

Levitis suggested the ministries should not qualify as acceptable insurance. “There are some insurance regulators who have raised concerns,” he said.

One of those concerns, he said, is that health sharing ministries may be providing coverage to people who do not have a religious affiliation but simply want to escape Obamacare.

Rogers said she’s familiar with cost-sharing ministries because some of her constituents use the programs.

“They just explained it really well to me, because I’ve never heard about it before, and after they explained it I felt like I understood it pretty well,” she said.

Rep. Mari Cordes, D-Lincoln, was asked by True North how young families struggling to make ends meet can be penalized for refusing to pay high premiums for health insurance. She responded by blaming the current administration in Washington.

“I’d say that the current federal administration has been very disruptive to progress in health care, and it’s actually their actions that have destabilized the insurance market and caused insurance rates to go up, and insurance companies to leave states.

“We find ourselves in a position here of trying to protect the people of Vermont from the harm the federal government has caused.”

“The current health care market place has many problems, and as long we continue to view health care as a product, we’re all gonna see these kinds of problems,” he said. “Healthcare shouldn’t be treated as a good that is bought and sold, it should be a public good that is provided to all people.”

Lippert said he hopes the committee will reach a conclusion about the bill before the midpoint of the legislative session, when most bills fail to advance.

“We need as much information as we can get, and we need to start making decisions,” he said.