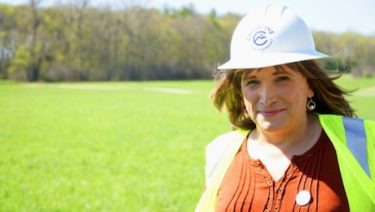 Hallquist recently went on CNN to discuss her campaign, which she says is centered around rural economic development. “You look with what’s happening in rural Vermont, it’s the same thing that’s happening in rural America. We’re seeing increased rates of poverty, flights to the city, an aging demographic. We can change that. It’s about economic growth for the bottom 20 percent.”

Perhaps seeking to test how similar Hallquist’s views might be to those of Bernie Sanders, the interviewer asked Hallquist, “Do you support capitalism?” Hallquist seemed to answer ‘no’ by describing how Americans have a “long history of measuring ourselves by gross domestic product (GDP). That just encourages consumption and we can see what consumption is doing to our world.” So, apparently Hallquist doesn’t want Vermonters’ economic success to be measured by GDP.

According to Investopedia, gross domestic product (GDP) is tracked by the federal government’s Bureau of Economic Analysis (BEA) and is the “monetary value of all the finished goods and services produced within a country’s borders in a specific time period.” Since WWII, the US has used GDP (or its predecessor GNP) to measure to what extent the American or Vermont economy grows, as a percent increase (or decrease) of goods and services produced from the previous period. The criticisms of GDP are wide ranging, but if the goal is to measure the entire production (and implied consumption) of an economy, there really aren’t any viable alternatives.

On the one hand, Hallquist seeks to increase “economic growth for the bottom 20 percent,” which needs to be measured if we are to notice improvements. On the other hand, Hallquist complains about the very idea of capitalism and economic growth, because that “encourages consumption.” Therefore, if Hallquist’s policies are aimed at making Vermont produce and consume less, Vermont will necessarily fail to create economic growth, for the bottom 20 percent as well as the rest of us.

Sadly, it would appear that decreasing consumption is more important to Hallquist than economic growth for the poorest Vermonters. This can be seen most easily in Hallquist’s support for “progressive policies” such as the $15 minimum wage, adding a new payroll tax, and a carbon tax, all of which will have a negative impact on Vermont’s economy, and low income Vermonters most significantly.

In one sense Hallquist is correct: GDP is not an all-encompassing measure of how well the bottom 20 percent of Vermonters are doing. We should look for ways to measure how poor Vermonters are doing at minimal cost to taxpayers. But raising taxes on all Vermonters is a surefire way to make the poorest Vermonters even worse off. We can hope that if Hallquist is sincere in her believe of economic growth for the bottom 20 percent she will fight for lower Vermont taxes rather than higher ones.

Images courtesy of Flickr/401kcalculator.org and Christine Hallquist for Vermont

6 thoughts on “Hallquist may seek economic growth in theory, but higher taxes in practice”