Based on bills proposed, pushed, but not passed last year, Vermonters must prepare for legislative challenges to their gun, real estate, and vehicle property rights, John Klar told attendees at the FifthAmendmentFest on Tuesday.

The event was the second in a series of State House lawn gatherings promoting citizen defense of constitutional rights.The First Amendment was celebrated on Dec.18. The next event, to be held Thursday, February 14, will honor the 14th Amendment.

The Fifth Amendment of the U.S. Constitution protects individuals from being deprived of life, liberty and property without due process of law. 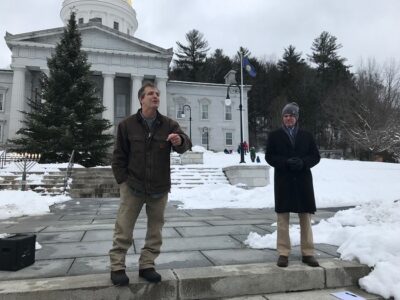 Klar predicted an attempt this year to pass a bill similar to H.610, which failed to pass the House last year. It required a waiting period for firearms purchases. For some people subject to court orders or criminal charges, it also would “require the immediate relinquishment … of all firearms that are in the defendant’s possession, ownership, or control or that another person possesses, owns, or controls on behalf of the defendant.”

“How can they propose a waiting period on a constitutional right?” Klar asked at the event. Gun-control lawmakers believe “if they ignore us long enough, maybe we will go away,” he said. “Well, we’re not going away.”

Next up on the State House house steps was Rob Roper, President of the Ethan Allen Institute. He pointed in the direction of the State House and said, “I do think property rights are under attack by the people in that building.”

Roper cited Proposal 9, a constitutional amendment endorsed last year by a majority of senators but then slowed to a stop during the pandemic-induced legislative traffic jam. While some bills were allowed into the passing lane — such as the Global Warming Solutions Act and Retail Marijuana — others like Proposal 9 were still stuck in traffic when the two-year biennium closed in early September.

Roper said property rights are threatened by this Proposal 9 clause: “the state of Vermont’s natural resources are the common property of all the people.”

“That would eliminate our right to own real estate,” Roper claimed. “That is a frightening Marxist statement. That is who we’ve elected. That is their vision.”

Roper noted that countries that restrict property rights tend to have bad environmental and human rights records. Self-interest encourages the property owner to maintain and improve property. “It’s a human right and we need to protect that,” he said.

In other legislation, some lawmakers want to regulate away “air BnB” operations in private homes, Roper said.

Roper also pointed to the climate-change driven effort to have 50,000 electric vehicles on Vermont roads within just a few years. With only a few thousand EVs owned by Vermonters now, that goal cannot be met “without a massive intrusion into your money and your free choice about what you drive,” he said.

Confiscatory carbon taxes would take money from poor people and redistribute it to wealthy EV drivers in the form of subsidies, Roper said. He quoted a woman of Latin American descent who told New Jersey lawmakers a proposed carbon tax is “tone deaf at best, racist at worst. Your carbon tax is taking money from poor brown people and giving it to rich white people to buy their cars.”

Klar advised concerned Vermonters to discuss concerns in the media and with their lawmakers, and to consider running for the Legislature. Although unsuccessful in his own run for governor, his grassroots campaign attracted several lawmakers who went on to win House seats and thereby deprive the Democrat/Progressives of their 100-seat supermajority. Klar said most of the candidates who ran in 2020 plan to run in 2022, and others are stepping forward.

No person shall be held to answer for a capital, or otherwise infamous crime, unless on a presentment or indictment of a Grand Jury, except in cases arising in the land or naval forces, or in the Militia, when in actual service in time of War or public danger; nor shall any person be subject for the same offence to be twice put in jeopardy of life or limb; nor shall be compelled in any criminal case to be a witness against himself, nor be deprived of life, liberty, or property, without due process of law; nor shall private property be taken for public use, without just compensation.