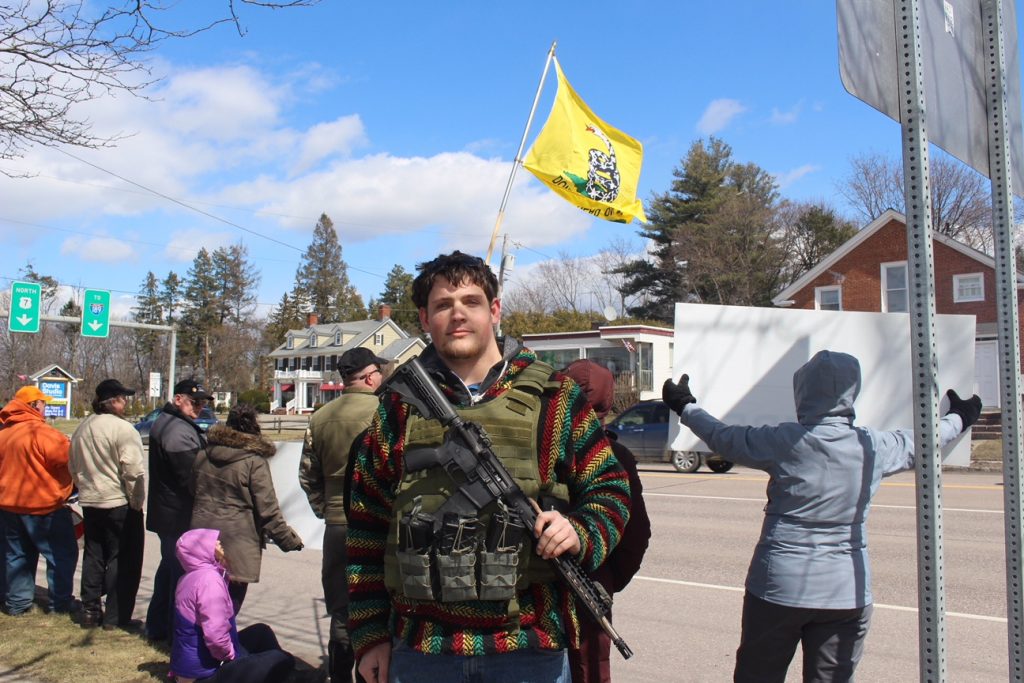 COME AND TAKE ‘EM: Sheldon Rheaume, of Essex, was one of the more than 100 gun-rights advocates who met Saturday in South Burlington to remind lawmakers that gun owners will be at the voting booths come November.

SOUTH BURLINGTON, Vt. — Second Amendment supporters met along Shelburne Road over the weekend to send a message to Republican Gov. Phil Scott and certain incumbent lawmakers: you stand to lose your jobs over gun control.

“Remember in November” was the slogan worn on shirts emphasizing the theme for the day. It was also on the back of the sweater worn by the organizer of the event, Christopher Covey, of Williamstown.

“We need to get candidates that we can vote for that are pro-Article 16 and pro-Vermont Constitution, to keep the state and what our forefathers and earlier generations actually knew as the state of Vermont,” he said.

He said while he wasn’t there to point fingers at Scott only, he does plan to support to a challenger to the present governor.

“Me personally, I’m promoting Keith Stern at this point,” he said. “He’s going to be running for governor, he’s an old-school Vermonter that’s been here his whole life, and he’s pro-Vermont’s Constitution as well as the United States Constitution.” 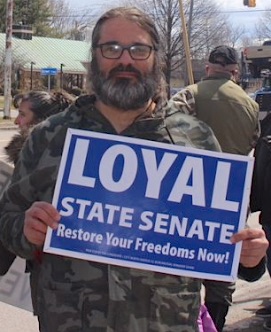 Loyal Ploof, a libertarian from Burlington, said a backlash over gun control will help candidates like him defeat incumbents in the next election.

Loyal Ploof, a libertarian from Burlington, also came out to support gun rights. He’s running for the state Senate seat of Sen. Philip Baruth, D-Chittenden, a gun control supporter. Ploof said he believes he will get strong backing from Second Amendment supporters.

“When these [gun control] bills come in, I’m gonna hopefully win and repeal them,” he said. He added that he wants to meet Baruth in a public forum to talk about gun issues.

“I’ve been telling all the media to get him, one-on-one. I want to debate him,” he said.

Ploof called shootings in schools “a social issue, not a gun issue,” and said there should be a focus on conflict management, stress management, and armed security on campuses.

Like Covey, Ploof said he will not be lending his support to Scott this fall.

“He slapped us all in the face,” he said.

Sheldon Rheaume, of Essex, stood in the crowd with an AR-15 rifle and a half dozen soon-to-be-illegal 30-round magazines. He also said he will remember lawmakers’ votes on gun control bills when November arrives.

“I’m gonna vote for people that are going to repeal them,” he said. “ … I’d only vote for Phil Scott if he promised to fix it. But I don’t see that happening, and I also don’t see him winning the primary again.”

Naomi Snelling, of Essex, is a preschool teacher who came out to support constitutional rights. She said she believes in educating people on guns and how to use them responsibly. 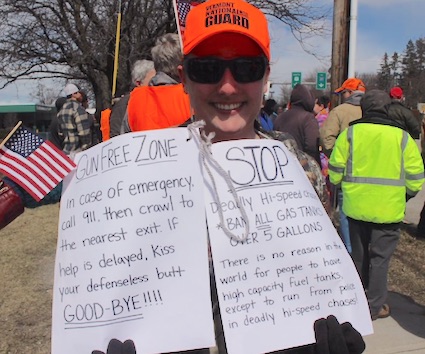 Naomi Snelling, of Essex, carried signs to express her opposition to gun control legislation. One of her signs reads, “In case of an emergency, call 911, then crawl to the nearest exit. If help is delayed, kiss your defenseless butt goodbye!”

“My biggest thing is protecting people and protecting myself and the children,” she said. “I can’t do that where I work, I can’t have a gun where I work. And if somebody comes is that is maybe angry or frustrated and has a gun, they can come in and shoot up the school.”

She said the school does evacuation drills, but that the maneuvers are not going to be enough.

Sonja Blodgett, of Lowell, held a big “Remember in November” sign and said she would be voting against the governor due to his flip-flop on gun control.

“Absolutely not [voting for Scott],” she said. “Hopefully somebody … will run against him in a primary challenge.”

Like others at the event, she said she is looking at Keith Stern as a possible alternative to Scott.

“People trusted Phil Scott and look what he’s done to the people who voted him in,” she said. “He turned around and went against everything that he said he was for — it’s disappointing.”

Hallie Johnson, of Highgate, said the latest gun law proposals will affect how she votes in November, and that she hopes the election will change the Legislature “back to what the people are looking for.”

“If he [Scott] doesn’t do the right thing this week by vetoing S.55, then in November we the people are going to remember that and we’re going to vote him out,” he said. “We have a right to our guns, we don’t need change.”

Vermonter Jim Sexton, said a problem with the current gun control bills this session is they fail to make schools safer.

“Not one of these laws that the Vermont legislature has passed in the last month have anything to do with school safety,” he said. “They are attacking law-abiding gun owners.

“We’re wondering when the governor and the legislature are gonna start doing anything about school safety.”