Jim Sexton, of Essex Junction, visited the Vermont State House on Thursday to ask the Sergeant-at-Arms and Capitol Police to remove sponsors of H.610 from the State House because they “violated their oath of office by expressly trying to make a law which denies every Vermonter the presumption of innocence” and “denies legal gun owners the constitutional right to bear arms.” 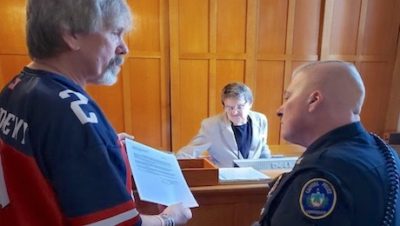 Sgt. Of Arms Janet Miller received the packet of information and said she would provide it to the Capitol Police.

Sexton, a Colchester native and son of a police officer, also met with Rep. Pat Brennan (R-Colchester), a strong gun rights proponent, and exchanged information with a local TV reporter. He plans to follow up with Capitol Police Chief Matt Romei.

“Too many people sit back and don’t stand up,” Sexton said. “My grandfather told me to stand up if you believe in something.”