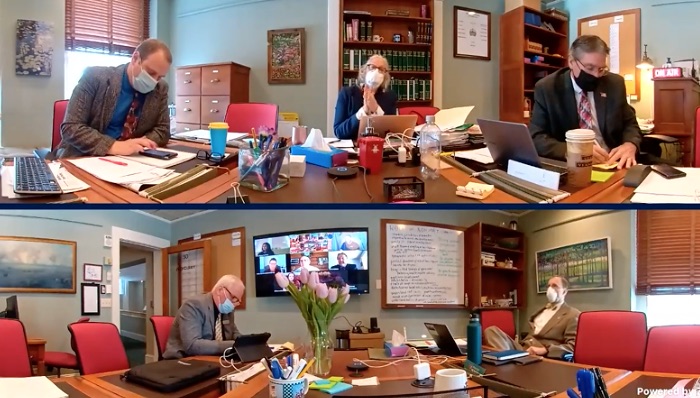 NO GUNS ALLOWED?: According to a bill being looked at by state lawmakers, gun owners could face penalties even for accidentally bringing a gun into a hospital.

On Thursday morning, lawmakers in the House Judiciary Committee held a hearing on a gun control bill that would prohibit firearms from being brought into hospital buildings — potentially preventing those inside from being able to defend themselves.

“This bill is not only unnecessary, but possibly dangerous for hospital staff and patients alike,” Davis told the committee via Zoom,” he said.

According to the text of S.30, the bill “proposes to prohibit the possession of firearms at childcare facilities, hospitals, and certain public buildings. … A person who violates this section shall be imprisoned for not more than one year or fined not more than $1,000.00, or both.”

Davis said that in the past he’s come into committee rooms citing statistics about gun crimes in order to convince lawmakers that new laws are not necessary. This time he focused on how the fundamental proposals in bills such as S.30 run contrary to the values of the Vermont and U.S. constitutions.

“The Bill of Rights guarantees individual freedom by virtue of the fact that rights are spelled out and understood in the negative connotation,” Davis said. “It’s our opinion that this sort of basic understanding of the concept of law and rights suggests that a method of legislation where every solution to every perceived problem is to just curtail everyone’s freedom across the board, and then leave people on the defensive of trying to explain why they need these rights in the first place.”

He noted that while some hospitals currently employ private security, many don’t. And even when security is present, it doesn’t replace having arms at one’s side.

“These security guards go armed a lot of the time with a can of pepper spray and a flashlight, and a cellphone with which they can call the police who are five to ten minutes away and under no legal obligation to protect you,” Davis said.

Davis said that last year when lawmakers looked at the bill, the committee chair, Sen. Dick Sears, D-Bennington, asked why anyone would want to bring a gun into a hospital. Davis said he would pose a question back.

“The question is this: Is your life worth protecting?” Davis said. “And if the answer is yes, then whose job is it to protect you? The Supreme Court has ruled on multiple occasions that the police are under no legal obligation to protect anyone.”

As the law currently exists, hospital staff members have the right to ask anyone with a gun who acts recklessly to leave or face a felony trespassing charge. Davis said this is an adequate protection against abuses.

“The fact remains that somebody has to confront this individual and say, ‘Hey, obviously you are not being serious about your medical treatment here, you need to leave and go get rid of your gun,'” Davis said.

Legislative counsel Erik FitzPatrick told the committee that, in his opinion, without S.30, hospitals that that post no-guns-allowed signs lack the legal means to enforce it.

“However, a person who simply disobeys the sign and carries a firearm onto the premises cannot be charged,” FitzPatrick said. “Because trespass means entering a property without permission, not violating a property owner’s rule about what you can’t do on the property.”

Examples of unintended consequences from gun control bills such as S.30 can be found in history. One example is Luby’s Cafeteria in Killeen, Texas, in 1991. Survivor Suzanna Hupp recalled how a state gun control law forced her to keep her gun in her car just before a shooter crashed his truck into the diner and killed more than 20 people, including her parents. The whole ordeal led to a reversal of the controversial gun control policy.

“Another outcome of the Luby’s massacre was that in 1995 the Texas legislature passed a law allowing residents with gun permits to carry concealed weapons,” History.com reports.