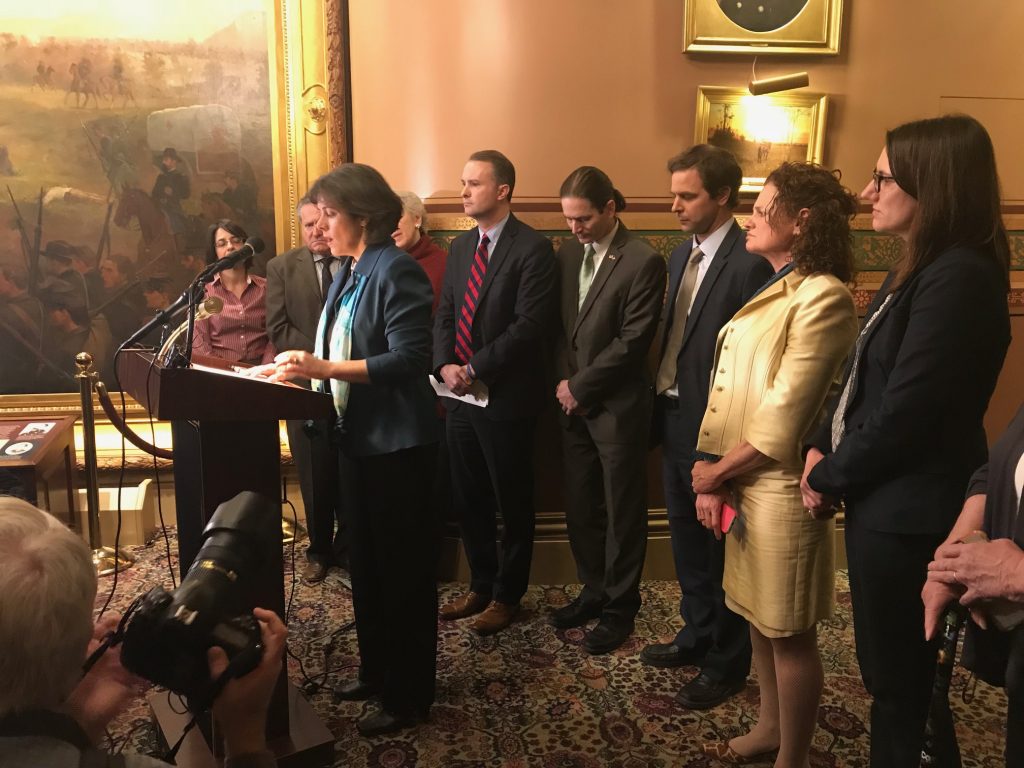 COMING FOR GUNS: House Speaker Mitzi Johnson, D-South Hero, talks at the Statehouse among Democrat and Progressive leaders in a push to support gun restrictions.

MONTPELIER, Vt. — Guns and more guns was the issue of the day as lawmakers and high school students alike gathered at the Statehouse Thursday to call for new gun restrictions in response to the deadly school shooting in Parkland, Florida.

The bills being called for are S.6, universal background check legislation, H.422, which gives police the ability to seize guns from those cited for domestic violence, and S.221, which would let a court deem someone an “extreme risk” to the public and have their guns taken away for up to a year.

One of the news conferences was led by Vermont Attorney General T.J. Donovan.

“That’s why as our chief law enforcement officer, I support closing the loophole and passing universal background checks in the state of Vermont.”

“Some have raised different concerns about if any one strategy will solve the entire public safety problem,” Ashe said. “I think universal background checks, as we’ve seen in other states, they don’t solve every problem with one fell swoop.

“The important thing is to ensure is that most laws that govern the state of Vermont and the people that live here rely on people following the law, so our expectation, of course, is whenever we pass a law that people will follow it.”

House Speaker Mitzi Johnson, D-South Hero, was asked if lawmakers would consider banning AR-15 semi-automatic rifles, and her answer appeared to suggest that bans on specific guns were not yet part of the discussion.

“I know with other types of legislation, when we start limiting a specific something, then something else pops up,” she said. “So, I want to make sure that what we do is effective, implementable (and) supports a longstanding tradition of safe gun ownership in Vermont.”

Shortly before the news conference, Eddie Cutler, president of the gun rights group Gun Owners of Vermont, testified to the Senate Judiciary Committee about the proposed gun restrictions. He told the committee that his group is already involved in helping people who may be considered a suicide risk, something that S.221 also addresses.

“Gun Owners of Vermont has become heavily involved in a gatekeeper program in which they are training us to recognize these people, sit down and help them out, and talk them into seeking counseling,” he said. “We’ve had four successes in the last two years.” 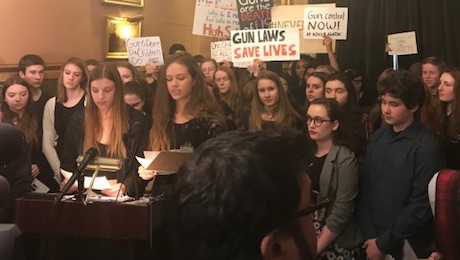 He said one of the lessons learned in working on this program is that it is not beneficial to take anyone’s guns away.

“I just want to get this straight, the worst thing you can do — and you can check with the Department of Health, and anybody else who is involved in this work — the last thing you want to do is ostracize these people, because they will not seek treatment or help from us or anybody else.”

“We will not accept the lax gun laws present today that continually allow for tragedies such as at Columbine High School, Sandy Hook and most recently Marjory Stoneman Douglas High School,” Scoppettone said. “The youth of today are brought up in a reality that normalizes gun violence.

“There are resources dedicated to training all of us to avoid being killed while in school. At times it seems like drilling is a part of our curriculum.”

“Despite tragedy and bitter partisan feuds, we will facilitate change,” she said. “In a direct address to Vermont politicians, you have the legislative ability to remove the fear from our schools and remove the distraction from our education. We demand that you do so, and you can start by passing S.6, S.221, and H.422.”

Words from Lt. Gov. David Zuckerman rang true for both sides of the gun debate.

“People are picking up the phone, people are sending emails. And to project what will happen over the next week or two is not entirely our job,” he said. “Our job is to have the process move forward, and the results will reflect what the people ask for.”