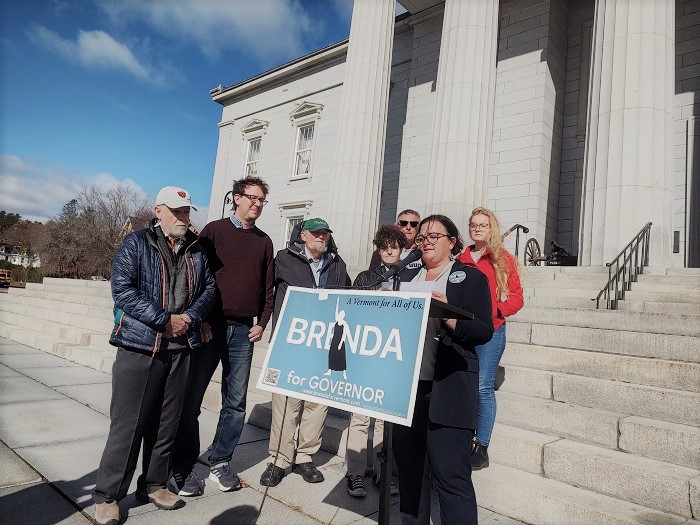 BRENDA TAKES STAND ON GUNS: Brenda Siegel, the Democratic candidate for Vermont governor, has committed to supporting a handful of controversial gun control measures if she wins office.

MONTPELIER, Vt. — Speaking from the Statehouse steps on Thursday, liberal-leaning political and community leaders gathered with Democratic gubernatorial candidate Brenda Siegel to discuss a list of gun control measures they would like to see enacted in the Green Mountain State.

Among the initiatives being touted were extended waiting periods for gun purchases, bans on certain types of rifles, limits on magazine capacity, and more

“We had high hopes that the third rail of Vermont politics was broken and we could finally start seeing some common sense legislation,” Casey said. “Unfortunately, since that day, not only has the governor not followed through on his promise to take bold steps to prevent gun violence, but he has been an absolute obstacle.”

Casey argued that the governor should not have vetoed extended waiting periods for background checks, noting that each year 80 Vermonters and 45,000 Americans die from gun violence.

“We need to treat this like every other public health epidemic and take bold steps to reduce gun violence in our state,” he said, adding that the state could pass “waiting periods, a ban on assault weapons, child access protection laws, and a number of other measures that would give municipalities control over having stricter gun violence measures in their own communities.”

He then offered an endorsement for governor, saying, “Brenda Siegel is going to be proactive on gun violence — I have no doubt that over a long enough timeline we will pass all of these bills in the Vermont Statehouse.”

A student speaks out

Merrick Modun, a student at Montpelier High School, also spoke at the event.

“It is time to re-weigh the arguments for safeguarding gun rights against the sheer magnitude of gun deaths,” Modun said. “We must find the courage to make reasonable change.”

Modun, 17, is running for state representative in the Washington-4 district against five other candidates. While not yet old enough to vote, Modun is eligible to run for office because Vermont has no minimum age for candidates for state-level offices. His campaign website outlines where he stands on various issues.

On the issue of guns, Modun suggested Americans currently use military-grade weapons, and he proposed limiting access to some guns.

“Just as we do not freely distribute drivers licenses, we should not distribute military-grade weapons to anyone who wants one,” he said.

He added that freedom “means we are free from fear.”

“Freedom is not going to school and wondering if we will come home. Freedom is not to read another daily headline of another victim lost to gun violence,” Modun said.

Modun also said “gun violence is our new priority, and as Americans we put faith in government to protect us. … The evidence is clear: when there are fewer guns, there are fewer deaths.”

Siegel, the rival to Gov. Phil Scott in the upcoming election, also spoke.

“I don’t know what our children have to do to convince us that it’s time for us to take action — or how many more of them have to die, or if we just have to wait for our Vermont children in our Vermont schools to experience the same preventable tragedies,” she said.

In response to a question about whether Vermont could utilize school resource officers to protect schoolchildren from gun violence, Siegel said having such officers on campus could foster racism if disciplinary action is disproportionally taken against minority students.

“I am not a huge fan of school resource officers,” she said.