S.30 would prohibit the possession of firearms at childcare facilities, hospitals and certain public buildings. It’s co-sponsored by 15 senators — enough to secure passage if they all vote for it. Co-sponsors are Sens. Balint, Bray, Campion, Chittenden, Clarkson, Cummings, Hardy, Hooker, Lyons, McCormack, Pearson, Perchlik, Ram, Sirotkin and White. All are Democrats and/or Progressives.

Vermont Daily asked Benning Thursday: “Does it look like S.30 doesn’t have the votes to get out of Judiciary?” He responded, “I don’t believe it does in its present form, but the conversation continues.” 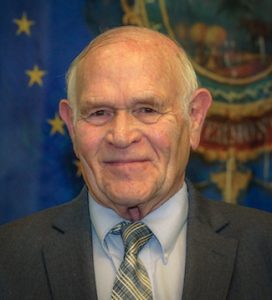 Those comments follow a lively committee discussion Wednesday with Chris Bradley of the Vermont Federation of Sportsmen’s Clubs. Bradley suggested everyone in the State House — including lawmakers — should be allowed to carry weapons to defend themselves. At that point, as seen on YouTube, Committee Chair Richard Sears, D-Bennington, said he’s concerned about volatile situations in hospitals, but doesn’t want anyone but capitol police carrying guns in the State House:

“Do I think legislators should be armed in the Capitol? No, not when we have a police force we’re spending good money on,” Sears said. ” … I can’t think of anything more tragic than a legislator feeling threatened and pulling a gun on a witness, who we have told you can’t be armed.”

To which Bradley replied, “Senator, you hit on a key point. It must be nice to have guards.”

“Yeah, well, the rest of us don’t,” Bradley replied. At that point Sen. Jeanette White, D-Windham, scoffed and Sears cut off the line of discussion.

White, though she is a co-sponsor, said, “I am having very serious concerns about the criminal aspects of it. … I am concerned about creating criminal records for people.” Baruth has insisted that violations be treated as crimes, not merely as civil violations as suggested during testimony last week.

Later in the hearing, Sears himself expressed reservations with the current language in the bill. “I have concerns about the bill, but I want to be open minded that there are issues in hospitals. … I’m having trouble with [the broad language about] government buildings. I assumed we were talking about town halls, municipal buildings, the State House.” Right now there aren’t three yes votes on the five-person committee to move it to the Senate floor, he said.

Baruth said he would redraft the bill to be more specific and would if necessary limit the kinds of buildings included in the ban. He added that for him, as sponsor of gun restrictions legislation, the fear is personal.

“I have had to walk the gauntlet from my committee room to my car past hundreds of people dressed in hunting clothes who recognized me and act aggressively towards me, in the State House,” Baruth said. “It is not a comfortable feeling for me.”

He added he’d feel better knowing guns were banned by law from the State House.

It’s not the first time Baruth has raised concerns about armed citizens in the State House. Baruth opened a Jan. 20 hearing of the Senate Judiciary Committee by explaining why he proposed S.30: the “unprecedented” threat posed by gun-toting Americans upset by political opponents and mask-wearing policies.

Last year, intimidating citizens brought firearms into state houses, Baruth said. “The pandemic intensified that. Anti mask protests began to merge with armed groups. People in daily life who ask others to wear a mask are being routinely assaulted and threatened. … We’re in an unprecedented time.”

Images courtesy of Bruce Parker/TNR and state of Vermont

36 thoughts on “Gun carry ban opponent to senator: ‘It must be nice to have guards’”