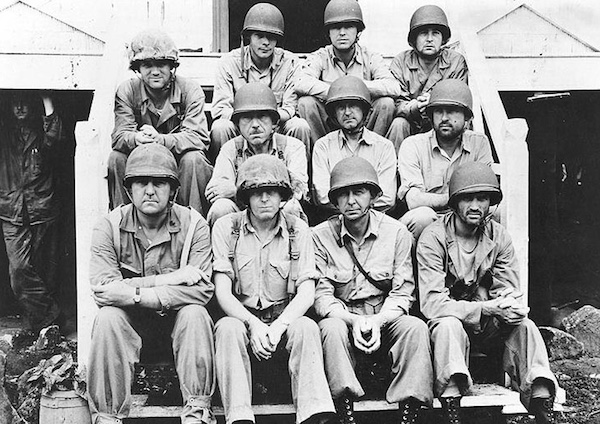 Officers directing U.S. fighting against the Japanese on tiny Tulagi Island in the Solomons. Then Lt. Col. Merritt A. Edson, of Rutland, is front row, second from left.

I might be mistaken, but if one were to ask Vermonters what was the significance of America’s invasion of the island of Guadalcanal, on Aug. 7, 1942, from most, a blank stare would be the reaction. Not so if you put the question to Gedeon Lacroix.

When asking Arlington’s Lacroix to describe what it was like to have been involved in the Guadalcanal landing, the 94 year-old Marine stirs with emotion. For him, it was not 75 years ago; it was yesterday. The destruction and loss of life on both sides of the battle were events that he and his fellow survivors cannot erase from their minds — it was that bad.

In 1942-1943 America paid an awful price to secure Guadalcanal. Over 6,000 Marines, soldiers, sailors, and airmen were killed during the six month campaign. America lost 615 planes and 26 warships, including two of our country’s naval leaders, Admirals Scott and Callahan.

To further personalize the losses, when the cruiser, USS Juneau, was sunk on Nov. 13, 1942, during a night action with a Japanese submarine, the five Sullivan brothers, all serving on the Juneau, lost their lives off the coast of Guadalcanal.

The Japanese defenders suffered even greater losses. Their retreat back across the Pacific came only after their loss of over 40,000 island troops, 38 ships, and 682 planes. Japan’s goals of blocking Allied forces coming north from Australia and having free rein to the Hawaiian islands were not achieved.

In 1942, how Americans handled the news coming from the South Pacific was mixed at best. The horrendous losses were much greater than that of Pearl Harbor — from the result of our first land encounter with the Japanese Imperial forces. The terrible news did not bode well for many Americans, especially since Corregidor, Bataan, Wake Island, the Philippines, Singapore and Malaysia had only recently been taken over by Japanese forces.

For others, hearing about the landing and sea battle only reinforced their conviction that America could win the war. This feeling was reinforced by the June 1942 naval Battle of Midway, which many had considered the turning point of the war. It very well might have been, but the losses that were to come over the next three years far exceeded what had occurred on Guadalcanal. 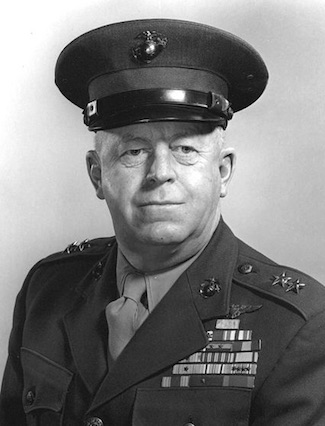 Maj. Gen. Merritt A. Edson, of Rutland, Vt., is best known for the defense of Lunga Ridge during the Guadalcanal Campaign in World War II.

Lacroix was unaware in August 1942, when he was knee-deep in the mud of the 25 mile-wide and 90 mile-long volcanic and rainforest island, at the other end of the island was another Vermonter — Merritt A. Edson, of Rutland.

Edson, commander of the 2nd Marine Raider Battalion would later receive the Medal of Honor for his courageous efforts on Guadalcanal. In 1947, at the request of Vermont’s Governor Ernest Gibson, Edson formed the Vermont State Police.

One of many lessons to be learned from our country’s involvement in Guadalcanal would be for our military and political leaders to move with great caution before committing the lives of our young men and women. Political candidates will say that we need to have national leaders in office who have experienced the horrors of war. Not necessarily so.

Twenty-five years after Guadalcanal came the war in Vietnam. Presidents Eisenhower, Kennedy, Johnson, and Nixon were all involved in World War II. Each of them, in one way or another, had their fingerprints on what transpired in Vietnam. Common sense, level-headedness, a deep appreciation of history, and an understanding of what wars have cost are the only guarantees on not experiencing another Guadalcanal.

When the subject of Guadalcanal is brought up, it is uncomfortable to look at Lacroix’s eyes. The noted naval historian Samuel Eliot Morison best summed up all that Guadalcanal was when he said, “For us who were there, or whose friends were there, Guadalcanal was not a name, but an emotion.”