MONTPELIER — As lawmakers begin evaluating the pros and cons of carbon pricing methods in Vermont, the House Energy and Technology Committee appears to have invited testimony mostly from individuals and groups who support a carbon tax.

This week, lawmakers are hearing from experts and advocacy groups regarding a state-commissioned study on decarbonization methods in Vermont. But while proponents of CO2 reduction policies have been well represented in the hearings, critics appear to have been frozen out, perhaps by design.

Rob Roper, president of the Vermont-based Ethan Allen Institute, said his organization was not invited to talk with lawmakers in the House Energy Committee. EAI, a free-market think tank, has consistently opposed carbon taxes and other government-mandated measures to reduce fossil fuel use in Vermont. 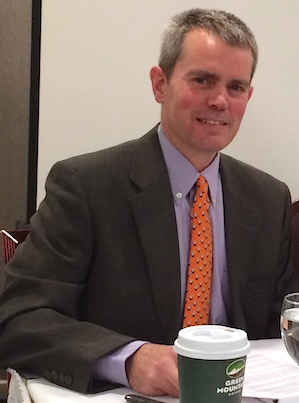 “It’s not particularly surprising to me — the majority parties in the legislature don’t want to hear from us,” Roper told True North.

Since the Ethan Allen Institute is a 501(c)3 education organization and not a lobbying group, leaders have to be invited.

“We never got an invitation,” Roper said, adding that the hearings have been little more than “a cheerleading squad” for a carbon tax.

Democratic and Progressive party leaders at the Statehouse have been reluctant to discuss carbon tax proposals openly due to widespread opposition from voters and pro-business groups like EAI. However, a wave a progressive freshmen lawmakers could force the issue back into the spotlight.

“Some of their more conservative members don’t want a carbon tax,” Roper said, “but there are now some 30 new Democratic members who are younger and farther left; they not only ran on a carbon tax, but they received money from the Vermont Conservation Voters group to help them get elected. I am sure there must be a sense for some payback for the help.”

EAI was not the only group kept out of the discussion.

Matt Cota, executive director of the Vermont Fuel Dealers Association, said his industry group, which supplies 99 percent of the state’s transportation fuel and 80 percent of the heating fuel, also was left off the committee’s invitation list. Cota made it a point to contact committee members this week to make sure VFDA is included in a House session scheduled for Jan. 29.

Rep. Timothy Briglin, D-Thetford, is chair of the House Committee on Energy and Technology.

“We’d like to be a part of this discussion and the decision making since the legislature wants to eliminate the products we sell,” Cota said. “I don’t know the committee chair very well, but I contacted him and said, ‘Listen, there’s an excellent opportunity here to see how our industry members distribute … fuel here in Vermont.’ He said, ‘fair enough,’ so I’ll give him credit for that.”

Cota said he plans to brings several points to the attention of legislators, especially after reading the House-commissioned 146-page report on decarbonization methods in Vermont.

“These methods (in the report) will not solve climate change,” he said. “According to the analysis, Vermont will not meet climate goals by implementing a carbon tax. And it will not benefit the economy — a carbon tax could lower Vermont’s GDP nearly 1 percent.”

Cota stressed that large employers and low-income Vermonters will “feel the pain” of the approaches many legislators are considering.

“Low-income and rural households spend a larger percentage of their income on energy,” he said. “A carbon tax is regressive, particularly in rural areas of Vermont, where people are more dependent on gasoline to get to work and heating oil to stay warm.”

He also worries about the impact carbon pricing policies might have on energy intensive industries.

“A carbon tax will signal to large employers not to move to Vermont — or current employers to move out,” Cota said. “Due to the sales tax, pollution fee and fuel tax, Vermont businesses already pay 7 percent more per gallon than our neighbors in New Hampshire (based on $3 gallon heating oil). A carbon-pricing policy that levies a $100-per-metric-ton tax would make the same fuel 50 percent more expensive. Raising the cost of energy purchased in our state will provide an economic advantage for businesses to operate outside of Vermont’s borders.”

Other concerns from Cota and Roper include the loss of competitiveness Vermont could suffer relative to its neighbors.

“Half of Vermont’s population lives near the border of New Hampshire, Massachusetts or New York. The carbon tax study recognizes that liquid fuels are easily transportable, delivered directly to a tank at a home or business,” Cota said. “Out of economic necessity, carbon tax avoidance will become widespread. There is no prohibition on consumers purchasing untaxed fuel outside of Vermont and transporting fuel in cars, trucks, cans or portable tanks in their personal vehicle. This method of transporting fuel is inherently unsafe.”

The report itself lists various red flags to decarbonization policies. For example, the report found that rural households are hurt worse than residents living in more urban areas, such as Chittenden County.

“No wonder the mayor of Burlington called for a carbon tax back in December,” Cota said. “Urban areas where homes employers are more concentrated and where public transportation is readily available will do better than those living in the ‘other Vermont.'”

Most groups invited to appear before the committee support climate action policies, including carbon pricing. They include, among others, the Energy Action Network, VPIRG, Capstone Community Action, the Energy and Climate program of the Vermont Natural Resources Council, Vermont Business for Social Responsibility, and Energy Independent Vermont.

“Notice anything interesting about this lineup?” John McClaughry, vice president of the Ethan Allen Institute said this week on a local radio broadcast. “These groups are the carbon tax spearhead in Vermont. They’ve worked furiously for four years to peddle the carbon tax, the ESSEX Plan, and numerous variations. Now the committee wants their views on this latest boondoggle study, but not from the organization that has led the charge against a carbon tax, the Ethan Allen Institute.”