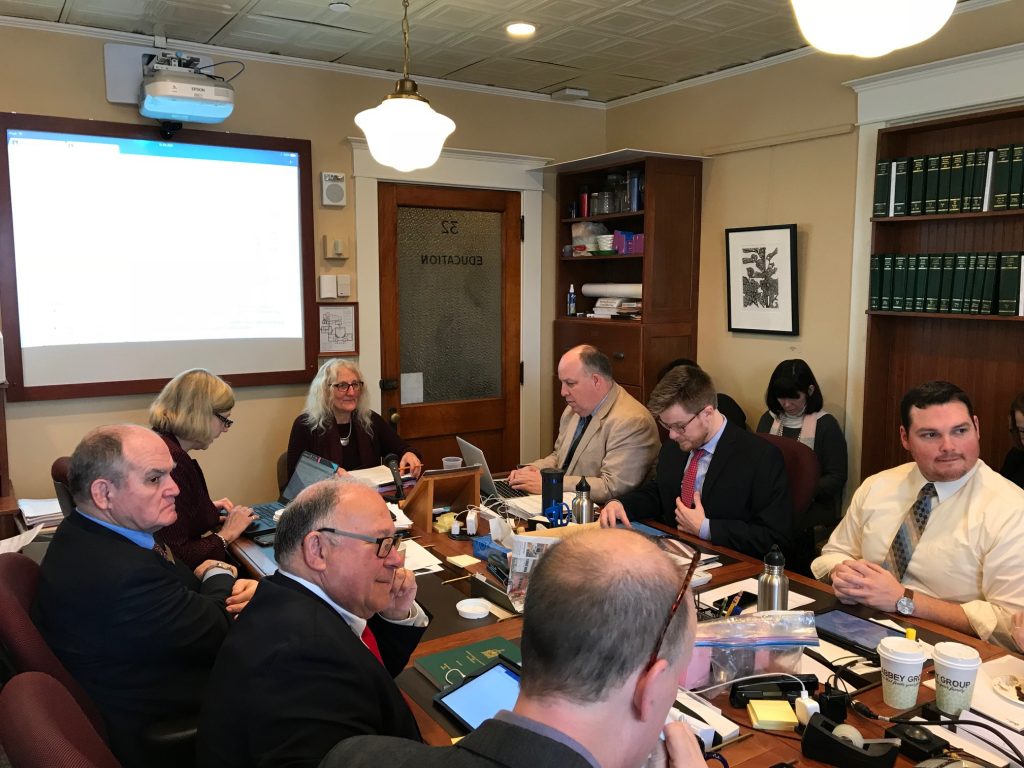 What standards should apply for private schools when they take public tuition money was the topic of discussion in the House Education Committee on Wednesday at the Statehouse.

Jo-Anne Unruh, executive director of the Vermont Council of Special Education Administrators (VCSEA), met with lawmakers to argue that independent schools should take in more special-needs students if they take public dollars.

Unruh, a member of the Independent Schools Study Committee created last year through Act 49, says the committee’s goal has been to examine “whether [taking public money] should be conditioned on open enrollment policy, and how independent schools should develop and deliver special ed services, and in which categories.” She also discussed which forms of financial disclosure should be mandatory for those schools.

Among her chief agenda items was to advocate for an open enrollment policy.

“[Open enrollment] is that you have a disability-blind enrollment process,” she said. “If you have more students then there are slots available for publicly funded students in an independent school, there’s a lottery available.”

She said selective treatment is part of the status quo position and needs to be changed.

“That’s in order to prevent what does seem to happen, which is that students who are poorer and students who have disabilities have less of a presence in independent schools then they do in public schools.”

She presented data from the Agency of Education that shows a disparity between high- and low-income families when it comes to their representation in private schools. She noted that there’s a different set of rules regarding the retention of students admitted into independent schools and public schools.

“Some students can be refused admission, they can be counseled out,” she said. “And the same disciplinary protections that are present for students in public schools who have disabilities are not required in the independent schools.”

Of the state’s 84 independent schools, 32 are for special education only. Those schools are designed for students that struggle to function in a normal classroom setting. Unruh said that the ultimate goal for those schools is to help those kids get back into the regular classroom.

“In some school districts, it’s very difficult to find another school because there are so many independent schools and there’s not a lot of public schools,” she said. “So, parents find themselves without a school for their child and that’s extremely emotionally stressful for the family.”

Rep. David Sharpe, D-Bristol, chair of the committee, summarized his understanding of the current rules.

“A public school has to be capable of serving students with any category of special needs,” he said. “However, if the special needs exceed the ability of the school to deal with them with the least restrictive environment, the school board is permitted to place that student in a different school.”

In addition to open enrollment, VCSEA is calling on independent schools to participate in what’s called the “multi-tiered systems of support,” or MTSS, a reading and behavior support system that public schools use.

According to the Education Agency’s website, MTSS is “a comprehensive, evidence-based, and systemic framework for teaching and learning that unifies general and special education in an intentional, ongoing collaboration.”

Towards the end of her testimony, Unruh reiterated that she sympathizes with the challenge for independent schools with limited resources to take on more high-needs students.

Early in her talk, said one of her first education experiences was to help a German family care for a child with a severe brain disability.

“That really was the foundation for my understanding of the issues and stressors that families endure, and the importance of community in the lives of people dealing with disabilities,” she said.