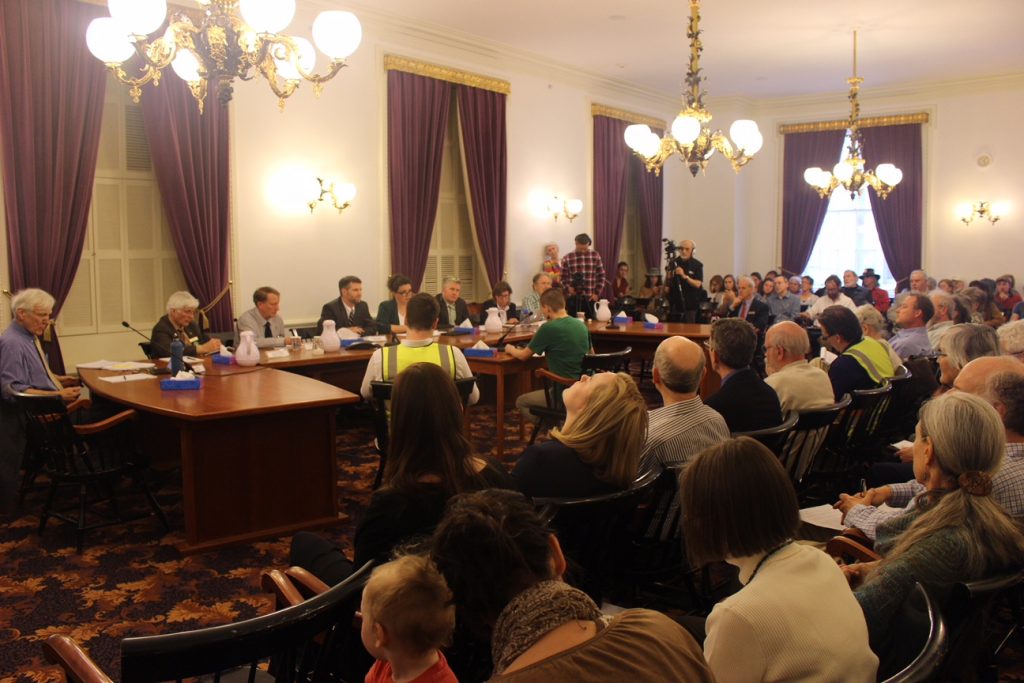 ALL GREEN – Environmentalists dominated in numbers a public hearing on a bill which would ban new carbon-fuel infrastructure – namely gas pipelines and large fuel storage tanks – which will likely raise the cost of energy and heating in Vermont.

MONTPELIER — About 60 Vermonters met at the Statehouse on Tuesday evening to voice their support for banning new carbon-fuel infrastructure in Vermont.

Their main audience was the House Energy and Technology Committee.

H.51 has been a hot topic in legislative committee rooms this session. If passed into law, it would prohibit new large-scale fuel storage tanks and natural gas pipelines.

Proponents of a ban cite dire predictions of global warming as a crisis that must be addressed. It was this crowd that dominated the podium as speaker after speaker took turns arguing that society must move away from carbon-based fuels.

While many Vermonters don’t agree the earth is in crisis, that group had almost no representation at this public hearing.

“In spite of all the talk, all the controversy, all the plans, we are still at the same carbon level that we were at in 1990,” he said. “We are not, I think, meeting our responsibilities to our children and our grandchildren. A lot of us are going to be gone, we’re not going to live through this. We’re not gonna have to deal with the traumatic things that are coming their way.”

Flood suggested that the wealthiest people in Vermont must pay more to save the climate.

“The Trump tax bill resulted in the top 20 percent of Vermonters getting a total of $350 million tax break — $350 million that they are not paying any longer,” he said. “So we have a choice: We can continue to do very little and leave the mess for our children for them to pay and deal with, or we can do what’s right and we can act now.”

JT Dodge, of Newbury, Vermont, was one of the only speakers to voice any clear opposition to the bill. He said Vermont is a small state and doesn’t contribute much to national CO2 levels.

“Vermont produces 0.01 percent of all of the country’s greenhouse gases,” he said. “Sure our carbon emissions have gone up since 2013 since we shut down Vermont Yankee nuclear power plant in Vernon. What did we expect?

” … These types of proposals than ban Vermont’s fuel choices are aggressive and extreme, they present false urgency. Some legislatures have suggested that human extinction is on the near horizon. We hear about weatherization as a solution to converting to less common, less tested fuels.”

Daniel Batten, of Bristol, said his family is new to Vermont and came to the state in part to escape the perils of climate change.

“We felt that shifting to a northern state would give us, and particularly our daughter, an opportunity to establish ourselves as residents and get ahead of the others who will not have as much luxury in future decades,” he said.

He noted how Vermont, which now has a supermajority of Democrats and Progressives, seems to be leading the nation in its environmental agenda.

“We chose Vermont because we see the state as a beacon of hope for progressive leadership and environmental stewardship,” he said. “When we first visited in 2017, we saw an ocean of solar panels and we heard about how the state had banned fracking, things that seemed almost impossible in Virginia.”

Carrie Wiater, of Burlington, talked about her opposition to fracking, a form of detonating explosives in the ground to break up natural gas sources for extraction. The practice has produced an economic boost via abundant and cheap energy, but critics argue there’s too much land and water pollution associated with the process.

“Massachusetts gets more than half of its electricity from natural gas, yet methane may be just as harmful if not worse for the environment as CO2,” she said. “Fracked gas produces large quantities of methane, which has 84 times the warming potential as CO2 over a 1-year period. So why is it being presented as renewable and as a bridge fuel?”

After the event, Dodge spoke with True North about how the event was stacked in favor of the environmentalists.

“One thing we’ve realized is there’s a lot of wealthy lobby groups involved, and much of it is from out of state, but not all of it,” he said. “Groups like 350.org, VPIRG, VNRC, these are all multi-million dollar groups. If you look at Seventh Generation and you look at Ben & Jerry’s, these are also large billion dollar foreign corporations.”

He continued, “What I’ve seen here is it looks like we are pretty much overwhelmed with the level of organization that a lot of these groups have. These people are really involved — they are involved in the schools, they are educating our young people, so they are showing up here with the organization. I don’t fault them for being organized; it’s time that we get organized.”