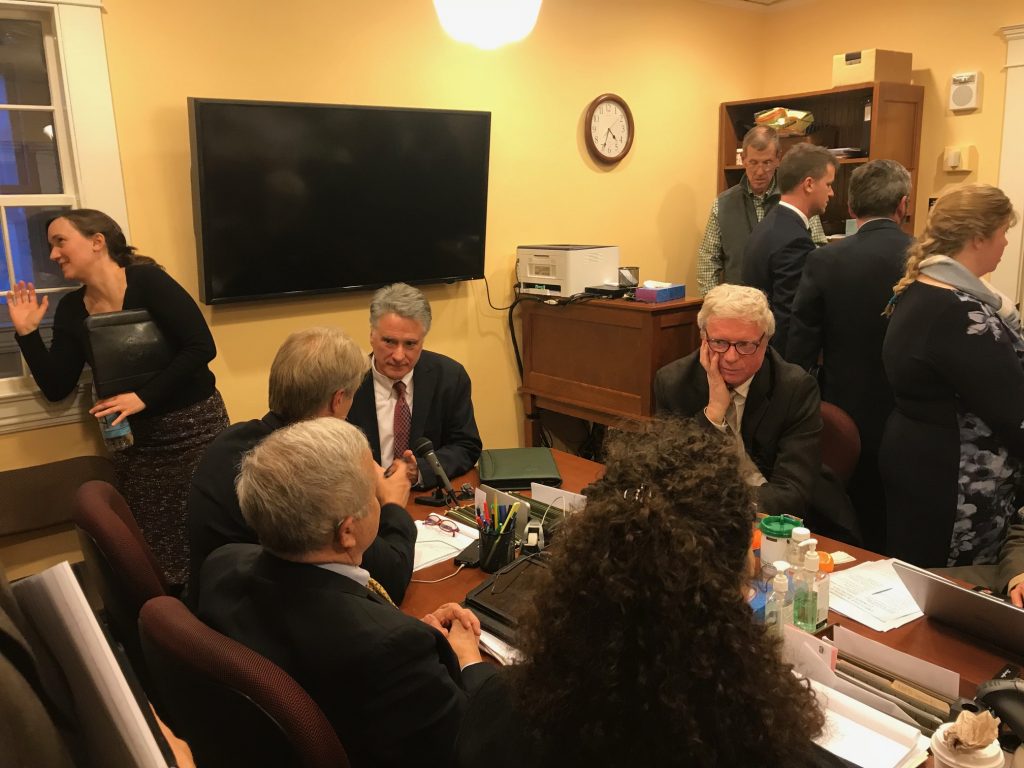 TOO MUCH COST FOR POWER: Robert Dostis, GMP vice president of Stakeholder Relations, takes questions from the House Energy and Technology Committee on why power rates went up 5 percent.

MONTPELIER, Vt. — Green Mountain Power’s consumer rates are going up 5 percent and the House Energy and Technology Committee met late last week to find out why. It has a lot to do with green energy.

On Thursday, spokespersons from the utility and the Department of Public Service took the hot seat to explain while state reps peppered them with questions.

Renewable energy projects, and in particular net metering projects, are confirmed to be driving up costs. So far the impact is said to be minimal, but with the state’s lofty green energy goals still looming, there could be more price-hikes to come.

First up was Jim Porter, director for public advocacy at the department.

“[The rate hike] came up right at 5 percent and I guess the first thing I will say is, in my job, whenever we see a utility come up for a rate case, we would always like to see a rate decrease,” Porter said. “It was a little disappointing, and I think, frankly, Green Mountain Power was a little disappointed too.”

“So that’s about 4 percent, and both of those things affect all utilities in New England — we’re all part of ISO New England, the independent system operator,” he said. “Most of those costs are beyond the control of the utility.”

Specifically, Porter referenced that limitations in grid transmission capacity may be driving up costs.

“I think we also are seeing some costs with some constrained areas of transmission,” he said.

He did not elaborate, although transmission upgrade proposals have been in the news recently, indicating a demand for new infrastructure exists.

He said roughly 1 percent of the increase was attributed to net metering. Net metering is when a homeowner or business will purchase and install a new energy source, usually solar, and any excess energy they don’t use is sold back to the utility. The concern with this system has been that the utility must buy it, and for a premium price.

“The power costs which are most problematic are the costs where they have to buy this capacity and from more expensive sources,” Porter said.

The price, currently around 20 cents per kilowatt-hour, compares to around 6 cents for general market electricity off the grid.

With Vermont’s Renewable Energy Standard, the state has set requirements for utilities, including a mandate for 75 percent of electricity sold to be from renewables by 2032. Rep. Warren Van Wyck, R-Ferrisburgh, asked how the state intends to work towards these goals without overburdening the ratepayers.

“As a public advocate, is that something that you bring before the administration and legislators and say we have increasing demands for net metering, but that’s going to be increasing the cost drivers because we have this RPS [Renewable Portfolio Standard] that says we have to use an increasing number of renewables?” he asked.

Porter responded that net metering “is now having a tangible rate impact” for consumers.

“There are contracts in place with the utilities under various previous programs that, as you say, we are paying more than perhaps you could buy the energy for elsewhere,” he said. “But as the advocate, I can kind of tell you, here is the effect this is having with the utility, and you know it’s all a balance. We are beginning to see, certainly, some impact from this.”

The high cost burden is the main reason why caps on net metering installations per community are set by lawmakers, and the pressure to build more means there is often still debate on net metering rules.

This is when solar developers will build usually a 500-kilowatt system and they set up power-purchase agreements with mostly large commercial customers. The initial purchaser usually gets a discount but not everyone else.

“All of the other customers are actually paying that developer the net metering rate,” Dostis said. “Now it’s lower, but the majority of those projects, which represent now about 50 percent of all the capacity of net metering under just 500-kilowatt systems, all of those projects are getting 19 cents per kilowatt-hour.

“So our customers are clearly paying a very significant amount of money for these projects to be developed, and the true beneficiaries are the solar developer and then the entity taking the power.”

“So right now your power costs are around 6 cents [per kilowatt hour], and ongoing, to ramp this up, you are going to be adding in facilities that are going to be at 10 cents. So, there’s going to be overall upward pressure?” Wyck said.

Dostis responded that every energy source plays a role in the overall grid.

“There are different value propositions for all the generation types, so there was a time when solar was valued much higher because it had the ability to shave peaks [peak load demand],” he said.

Not all pressure is pointing upwards for the electricity rates. The new federal tax plan recently signed by President Donald Trump was enacted on Jan. 1, and it reduces the corporate tax rate from 35 percent to 21 percent. Porter said the savings should be passed on to ratepayers.

“That will have a demonstrable impact on Green Mountain Power and also Vermont gas,” he said. “In fact, in December we sent a letter to both of those companies asking what their intentions were.

“They have both responded, and all of those savings will go back to the ratepayers, and we’re in the process of doing it right now.”