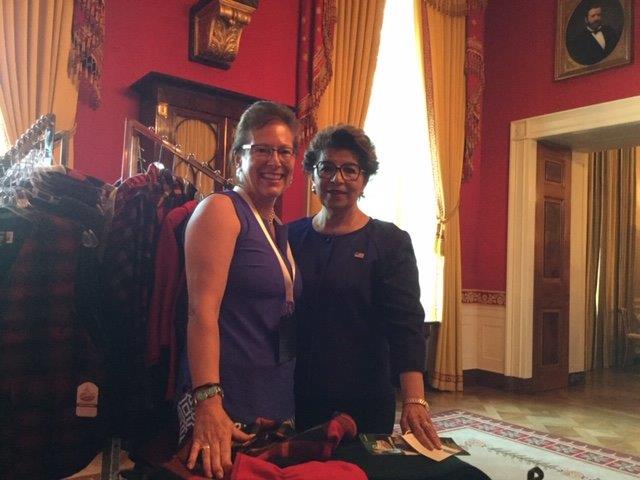 AT THE WHITE HOUSE: Stacy Manosh, left, CEO of Johnson Woolen Mills, recently visited the White House to celebrate American business. Standing next to her is U.S. Treasurer Jovita Carranza.

“There are some people that are just nasty, but there is more that have written good things,” Manosh told True North in an interview. “That’s why they call them the silent majority.”

“We’ve gotten a lot of very, very wonderful emails that just said ‘hey, we respect your courage to speak out,'” she said.

Manosh’s clothing company has been in existence since 1842 and has spanned four family generations. The business was featured at the third annual Made in America Product Showcase event on July 15, hosted by President Trump. Manosh met the president as well as CEOs of 49 other top American companies.

….and viciously telling the people of the United States, the greatest and most powerful Nation on earth, how our government is to be run. Why don’t they go back and help fix the totally broken and crime infested places from which they came. Then come back and show us how….

An excerpt of Manosh’s comments made to Business Insider in an email show the Vermont CEO taking on the media for misrepresenting the president’s words:

As usual with all the fake news people, that is NOT what he said. He said, ‘if you are not happy here, you are free to leave.’ There was not one person in the crowd that did not agree with him. When people come to this country LEGALLY, they should not bite the hand that is welcoming them.

The move caused some members of the public to post negative comments about the company on Yelp.

“When wearing Johnson Mills Woolen clothes, I know that I am wearing clothes made by, and for, members of the master race,” posted Dan L from New Haven, CT, who gave the store a 1-star rating, even though he gave no indication he’d ever been to the store.

Of more than a dozen reviews posted, four of them from outside Vermont cite politics as the reason for giving low scores. One of the commenters admits that one hat she purchased from Johnson Woolen Mills was so good that an ex-boyfriend stole it. But then the comment veers into politics and leaves a two-star rating.

Of the remaining reviews, most offer four or five stars.

Despite all the attention, Manosh is not backing down. She maintains that the comments from the president were not out of line.

“My parents must have been racists because when I was growing up I was told if I don’t like it I can leave,” Manosh said. “They totally mischaracterized what [Trump] said. He said, ‘Look, if you are not happy here, if you don’t like it, if it’s bothering you, it’s a free country and you are free to leave.'”

Vermont politicians, including top Republicans, joined the bandwagon in scolding the president for his tweets.

“I find these statements offensive, racist and certainly not what we expect from the leader of the greatest country in the world,” Gov. Phil Scott at a July 17 press conference. “Words matter and we’ve seen the same rhetoric used throughout history to discriminate, degrade and divide.”

“Silence is not part of my DNA in the face of such deplorable remarks. No Republican will find success defending them,” Benning wrote in a commentary.

However, according to a Reuters poll following the tweets, Trump’s support among Republicans rose by 5 percentage points, rising to 72 percent.

Also according to recent polls, Americans are getting tired of excessive political correctness speech codes.

“Fifty-two percent of Americans, including a majority of independents, said they are against the country becoming more politically correct and are upset that there are too many things people can’t say anymore,” NPR reported.

Manosh noted at the White House event that reporters weren’t interested in business innovation, but only talk about racism.

Manosh shared what it was like getting to meet the president of the United States.

“It was a wonderful experience,” she said. “The president loves made-in-America products, he loves things like that. And he’s the only one that I know of that has ever done an American products showcase like this.”