If you’ve been following thus far, you’ll remember that we currently have two gun bills in play for this year [H.133 and S.30] which have both passed their respective chambers of origin in time for the House/Senate crossover deadline. No action is currently scheduled on these bills, but they now have the whole rest of the session (however long that might be) and both bills enjoy broad support in their current versions, so we will almost certainly see them move here soon.

The bright side of the situation is that we are working with a watered-down version of S.30 that prohibits the carriage of firearms in only one place, rather than the multiple locations originally proposed. We will continue to monitor the situation and do our best to see it stays that way for the remainder of the process. 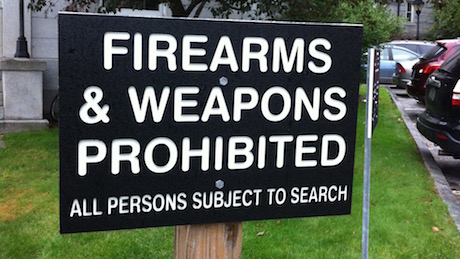 Eric Davis: “GoVT will continue to resist all efforts to restrict the right to keep and bear arms, but we will be taking a longer view with a more measured and proactive approach going forward.”

What exactly can be done about this nasty little predicament in which we find ourselves feeling largely unrepresented by our legislators is another matter, and frankly, not an easy fix. We have heard a great deal of grumbling lately on this subject and I want to reassure you, we at GoVT are equally frustrated as every last one of you are.

Some folks have advocated for a peaceful rally at the Statehouse — which we have done in the past — but unfortunately, that sort of demonstration would likely do more harm to our cause than good at this time. We heard multiple times throughout the S.30 hearings that these laws are needed to combat “right-wing extremism” and to prevent an “insurrection like we saw on January 6” from happening in Vermont. If you go back and watch the last hearing, every single one of the anti-gun lobbyists and their shameless school children props hit those same exact talking points over and over. They each talked ad nauseam about the need to expand the bill to cover other public locations such as polling places in order to to “protect our democracy” from “armed extremists.”

If gun rights advocates take it upon themselves in this current political climate to march on the Statehouse lawn, armed or otherwise, it will go poorly for us. Phil Baruth has already worked very hard at spinning the narrative that he and his fellow good-Samaritan gun-controllers are being threatened by gun rights advocates. When you take into account the blatant anti-gun bias of every major news outlet in the area, any sort of macho posturing by our side could be disastrous for Article 16 and the Second Amendment right now.

The people who make the laws in this state have openly stated that they view the Constitution not as a safeguard of personal liberty, but as something to be interpreted to their ends, and will happily use the full force of government against any dissenters. That means, quite simply, that if you want the culture to change in the legislature to one which once again respects the sovereign rights of the individual, we need to put people in those seats who share our values. That starts right now.

Now, I can hear the collective groan and eye-rolling whilst everyone simultaneously gives a heavy sigh upon reading this and muttering something under their breath about voting not having worked yet, but hear me out. Liberty-loving Vermonters feel like we keep getting beaten at the polls — in some districts we certainly do — but I would submit that we have not been putting forth our best efforts or even much of an effort at all up until the last few years. We made progress in multiple areas between 2018 and 2020 and we are learning fast.

You see, Vermonters who share our live-and-let-live mentality have historically not run for office. Those who have, have not enjoyed the same success as some of the more — ahem — “seasoned” politicians who know how to raise money and play the game but again, that is changing. Gun rights advocates picked up several seats in the House this year by running grassroots campaigns and that might be a large part of the reason we have not seen MORE restrictive gun control pushed this year. The usual suspects like Baruth will ALWAYS have something to push on behalf of their corporate owners — oops, I mean sponsors — from Everytown and Giffords but overall, the tone has softened from the “ban everything” hysteria we saw in 2018 and we have a chance to build on that.

Starting right now, everyone who is serious about changing the culture in this state to one which values individual rights needs to start thinking about what we can do to influence the next election. Who are the reps in your district? Do they accurately represent your values? If the answer is yes, ask yourself — what can you do to support them in getting reelected and spreading the message of liberty? If the answer is no, we need to think about how our resources could be best spent trying to replace that person in 2022.

Run for office. Run for Rep or a Senate seat. Run for your local select board or school board.  Run for Justice of the Peace, High Bailiff, Grand Juror, or Constable. If you can’t run, find someone who can and support the heck out of them. Register yourself, your friends, and your family to vote and then find some more people to register. If they are going to modify the voting system to make the Covid rules permanent, then we need to get creative and find a way to make those rules work in our favor.

There is an old saying that “you can only control what you can control.” If we want to start winning again, we need to stop posturing and focus on what we can control. Screaming “shall not be infringed” at the top of our lungs might give a certain satisfaction but it doesn’t produce results. Winning elections and taking back our government from the clutches of authoritarianism is no easy task but we are committed to this end and I personally believe it can be accomplished sooner than later. GoVT will continue to resist all efforts to restrict the right to keep and bear arms, but we will be taking a longer view with a more measured and proactive approach going forward.

Incrementalism is what got us into this mess, and it will get us out again. We have an opportunity to build on the fact that more new people (of all demographics) flocked to gun ownership in 2020 than any other year in history. If we work together and stay positive, we can change the conversation on gun rights in the Green Mountains.

Stay tuned next week for the next installment, where we will talk about bridging the gap between the gun culture and new gun owners (and even non-gun owners).