MONTPELIER, Vt. — While gun control groups are cheering a supposed sea change of opposition to firearms freedom across the country, gun rights supporters in Vermont — many of whom voted for Gov. Phil Scott — are expressing frustration over the governor’s apparent softening on the Second Amendment.

In the wake of the recent mass shooting in Florida, and a close call here in Vermont, Scott has embraced the “do something” mantra for gun control and school safety.

Yet while local gun rights supporters have suggested arming schools and allowing police to crack down on violent threats, the governor has thrown his support behind left wing gun control bills making their way through the Legislature.

Among the first groups to call out Scott for slipping on the Second Amendment is the Vermont Libertarian Party.

“Governor Phil Scott hasn’t been paying attention if he thinks Vermonters will sit idly by as he changes his position and enacts new gun control,” the group said this week in a statement. “The ocean of orange at the January 30th statehouse hearing should be enough to inform anyone that Vermonters cherish their gun rights, as protected by both the second amendment and the Vermont Constitution’s sixteenth article. 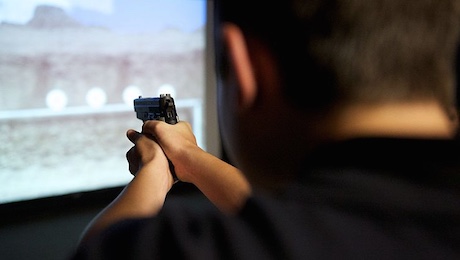 GUN CONTROL: Gov. Phil Scott’s recent willingness to consider new gun legislation for Vermont threatens to send shockwaves through his base of support.

“The Vermont Libertarian party fully supports the inalienable right to self defense by keeping and bearing firearms. No law abiding citizen should be deprived of their rights because of the actions of a criminal.”

Jeremy Ryan, the party’s chairman, told True North that Scott’s sudden shift on the issue could have a negative impact on his chances for re-election.

“It will depend on who is actually running, however many of us would rather vote for NOTA [none of the above] than support a candidate that we’re not comfortable with.”

Last week, in outlining his plan for school safety, Scott threw his support behind S.221, H.422, H.675 and H.876 — bills that enable police to seize guns in domestic violence situations, spell out judges’ discretion to confiscate guns from “high risk” individuals, and solidify the federal ban on bump stocks.

Scott administration spokeswoman Rebecca Kelley told True North on Wednesday that the recent shooting has compelled the governor to rethink the issue.

“As the governor has said, he is a fierce and strong supporter of all constitutional rights, including the Second Amendment, and continues to be an advocate for that,” she said. “But we faced a very real threat to a school right here in Vermont a few weeks ago, and in reading how close we came, what a close call we had and the details of that, the governor has said we have a rare opportunity to see what we can do better.”

She added that any changes to policies or laws should not violate the Second Amendment or Article 16 of the Vermont Constitution.

Not mentioned in the governor’s school safety plans are universal background checks, banning types of firearms, or arming teachers. However, Scott’s plan directs the Vermont State Police, in coordination with our school security liaison officer, “to conduct security assessments of all schools over the next several weeks.”

When asked if Libertarians might support arming Vermont schools, Ryan responded, “Yes, having armed security and allowing staff to arm themselves on school grounds is a good policy.”

Deborah Billado, chair of the Vermont GOP, said she thinks Scott will be “easily re-elected” in November. However, she agrees that gun control is one of those topics that enflames voters.

“Gun control is a very charged issue,” she said. “There are proposals on the table and let’s see how it unfolds over the next few months. As with all hot-button issues, there are people who are content, people who are unhappy and then those who are not paying attention and do not much care.”

On the other side of the gun debate, some are cheering Scott on. Martha Allen, president of Vermont-NEA, issued a statement in support of Scott’s new openness to gun restrictions.

“Unlike the president and his preposterous proposal to arm teachers with guns, Vermont’s leaders actually made a commitment today to start the hard work of making sure that what happened in Florida last week – and almost happened here a day later – never occurs again,” she said in a statement.

But on some of the bills, any compromise with the left will have only very fragile support.

Bill Moore, a firearms policy analyst for the Vermont Traditions Coalition, said the gun rights community might be willing to get behind S.221, which pertains to “extreme risk protection orders.” The bill would allow authorities, following a judge’s order, to take away guns for a 14-day period from people planning a violent attack or suicide.

However, he added that as of Wednesday morning, the House Judiciary Committee was considering changes proposed by the governor’s legal counsel, Jaye Pershing Johnson, that could threaten that support.

“By proposing changes to the bill and supporting H.422 elements being incorporated in S.221, she is effectively killing the fragile coalition that’s been built around this bill,” Moore said.

“The changes likely to come from House Judiciary on S.221 will recklessly reduce due process protections and likely infringe on lawful firearms owners’ Fourth Amendment and Second Amendment rights.”

Ryan agrees that lawmakers could cross the line and take away legal rights.

“Both H.422 and H.675 violate due process, even beyond the firearms confiscation,” he said. “What right does a judge have to impose any sort of punishment on a person who is innocent?”

19 thoughts on “Governor’s gun control push rattles his base”