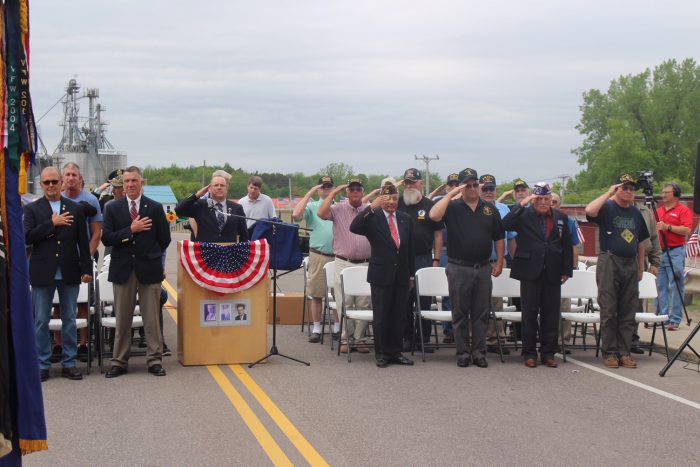 MOMENT OF RECOGNITION: Republican Gov. Phil Scott stands with veterans from Swanton to honor Vietnam vets and all U.S. soldiers who sacrificed their lives in the cause of freedom.

The light rain and threatening clouds did little to damper the patriotic speeches, military salutes, ribbon-cutting, and what turned out to be a sunny community barbecue in a nearby park.

The governor opened his Memorial Day speech by noting that 7,236 Vermonters participated in the Vietnam War, and 138 of them — including three from Swanton — paid the ultimate price in service of their country.

“I know that no matter how much time goes by, the pain of losing a loved one never passes,” Scott said.

The governor knows military sacrifice well. His father died when he was just 11 years old from health complications resulting from injuries suffered during World War II.

“Not a day goes by that I don’t think of him,” Scott said. “To the families of the three heroes we honor today, and to any Gold Star families who may be here as well, on behalf of all Vermonters, I thank you from the bottom of my heart.”

Scott noted the tough time Vietnam veterans faced when they came home from the war and faced a nation somewhat politically against it.

“The reception that many Vietnam veterans returned home to was difficult and unacceptable,” he said. “Some young Americans couldn’t separate their anger and political opposition to the war from the brave young men who fought and followed the orders in service to our nation.” 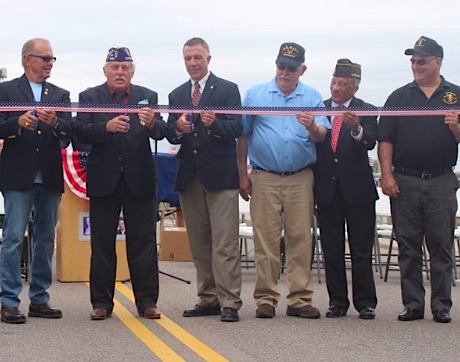 CUT THE RIBBON: Among the ribbon-cutters was Swanton native and veteran Larry Manchester, who was present to help dedicate the Vietnam Veterans Memorial Bridge, formerly known as Swanton Bridge.

He finished his speech with the words of Vermont’s only U.S. president, Calvin Coolidge.

“A nation who forgets its defenders will itself be forgotten,” Scott said.

The other featured speaker was Swanton native Larry Manchester. As a Marine from 1962 to 1965, Manchester was honorably discharged just before the war escalation. He served domestically in law enforcement, including as an embedded underground intelligence gathering officer who infiltrated radical opposition groups to the war, including communist groups such as the Weather Underground.

“The strategies and tactics used by many of these so-called anti-war protesters can best be described as aggressive, confrontational, ruthless and, many times, vulgar,” he said. “However, what law enforcement faced in this war against the war pales when compared to what our war veterans endured upon their return to America.”

Like Scott, Manchester noted how the soldiers were often met with taunting and other hostile actions not suitable to recall during the family-friendly dedication ceremony.

Manchester noted many in the audience may not have been alive or old enough to remember what was happening overseas at the time of the war, so he offered his take on the cause that was taken up by many.

“Our Vietnam veterans fought against the ravages of communism, which is by far the bloodiest, most oppressive totalitarian ideology the world has ever known,” he said. “They fought for millions of people who they’ve never met, or would ever meet.”

Manchester reiterated that this holiday and ceremony are a chance to honor those who fought and died.

“Memorial Day is a holiday to remind future generations to never forget those who made the ultimate sacrifice defending our freedoms, liberating countries around the world so that they, and we, can enjoy the security and freedoms that we so often take for granted,” he said.

“The dedication of this bridge as a memorial to our Vietnam veterans sends a clear and resonating message to all those entering or departing this village that we should never forget our defenders.”

Sen. Randy Brock, R-Franklin, was among the Vietnam veterans in attendance. He told True North it was a great ceremony for all Vermonters.

“I thought it was an excellent ceremony,” he said. “It captured the small-town feel of what Memorial Day is all about, which is a day of remembrance, and which we honor the fallen. And there were three young men who lost their lives in Vietnam from Swanton, and today we named a bridge for them in their memory.”