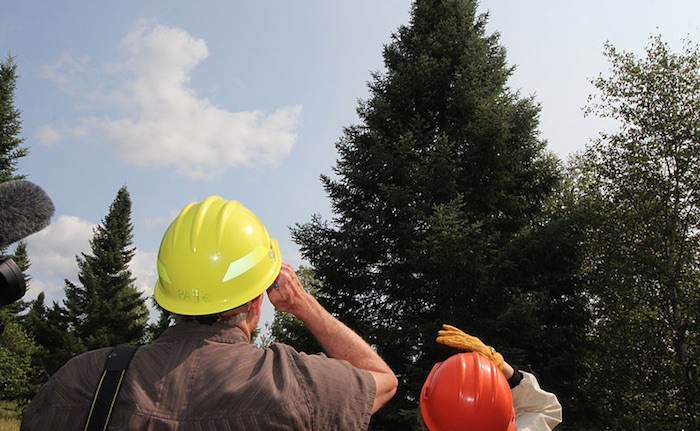 “The present team included three retired foresters (105 years of experience), but such credentials meant little to the forest service. It was mandated that a member of the team had to be certified in CPR, and there also had to be a certified chainsaw operator.”

Eleven years ago, 82 individuals from Bennington County and other locations in the Northeast were involved with bringing the 2007 U.S. Capitol Christmas tree to Washington, D.C. The eight-day journey to D.C. with the 60-foot balsam from the Green Mountain National Forest (plus 92 smaller trees) made Vermont unique in delivering the “People’s Tree.” The convoy, consisting of 22 antique Mack trucks, also visited eight U.S. Veteran hospitals on the journey — distributing trees, Christmas gifts and cards to the staff and residents of the facilities.

Two years prior to harvesting, wrapping, and delivering the 2007 Capitol tree, the Bennington Chamber of Commerce spearheaded the monthly planning meetings along with representatives from the U.S. Forest Service. The forest service has the ultimate responsibility in providing and overseeing the delivery of a tree that had to be deemed acceptable by the Architect of the U.S. Capitol.

However, long before the Bennington Chamber became involved, four residents of Bennington County would snowshoe into the Green Mountain National Forest, just west of Wilmington, Vermont, in late January to “release the tree.” For those who might not be familiar with this term, it means that the crew would trim an area around the designated tree so that sunlight could set upon the tree in the coming year. They did this for 25 winters. The team would also check for any damage from beaver dams, blight or other diseases that might bring harm to the tree. 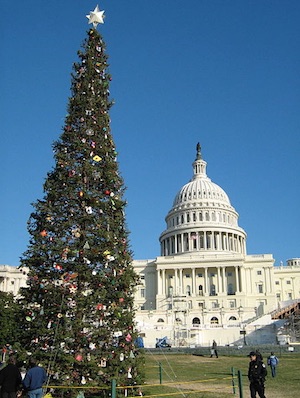 “Last April, the team informed the U.S. Forest Service in a letter that it would disband, as it could not keep up with the regulations. The letter was also sent to Vermont’s congressional delegation.”

For several who were involved, the 2007 delivery would be their fourth in bringing a tree from Vermont to our nation’s Capital. All of them had forest work credentials with decades of experience. It is a requirement that the tree for the U.S. Capitol comes from one of America’s national forests, and the state is selected years in advance.

What I have noted here is a brief description of what was involved in bringing the Capitol Christmas tree to D.C. That was then, but today an effort to replicate what had been done in the past has turned in a bureaucratic nightmare.

The effort to work with the U.S. Forest Service for the current committee of six was overwhelming. After two years of planning and meetings, last spring the committee decided to abandon its efforts to locate a tree that in 25 or 30 years might be selected as the U.S. Capitol Christmas Tree from Vermont.

The rules and regulations in place today to harvest such a tree might also have been in place in prior years, but surely were not enforced. The present team included three retired foresters (105 years of experience), but such credentials meant little to the forest service. It was mandated that a member of the team had to be certified in CPR, and there also had to be a certified chainsaw operator (I had no idea there was such a certification in place). Also, each member had to sign a formal “volunteer agreement” with the service.

The team had located some possible tree candidates, but another barrier to them getting started in the area arose — studies had to be undertaken by the forest service. The studies had to do with the environmental impact as well as any findings from an archeological review. All the team wished to do was to identify a tree and each winter apply the releasing. (I was a member of the team.)

Last April, the team informed the U.S. Forest Service in a letter that it would disband, as it could not keep up with the regulations. The letter was also sent to Vermont’s congressional delegation. Congressman Peter Welch informed us in April 2017 that he had passed our letter on to Sen. Patrick Leahy’s office to ascertain more information from the forest service. We have not heard a word from anyone.

In future years, a U.S. Capitol Christmas tree could very well come from Vermont. However, the dedicated team from Bennington County will not be involved.